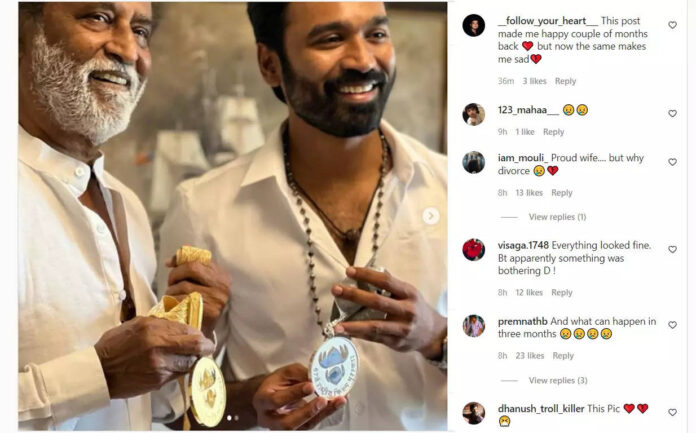 South star Dhanush and his filmmaker wife, Aishwaryaa Rajinikanth on Monday announced their decision to part ways and end their 18-year marriage.
The couple took to social media to release their statements and also asked fans to respect their decision and requested for privacy to deal with this privately.
“Eighteen years of togetherness as friends, couple, as parents and well-wishers to each other. The journey has been of growth, understanding, adjusting and adapting. Today we stand at a place where our paths separate. Aishwaryaa and I have decided to part ways as a couple and take time to understand us as individuals for the better,” read the official joint statements.

The news came as a shock to many adoring fans who took to social media to express their disbelief. “It’s really shocking! So sad,” said a fan while posting a happy throwback photo of the couple.

Amidst news of the separation, Aishwaryaa’s congratulatory post for her husband Dhanush and father, Rajinikanth on their National Award Wins went viral. Sharing the post from October 25, 2021, a fan asked, “#Aishwaryaa was so happy for Appa #Rajinikanth & husband #Dhanush when they won the award few months ago. Suddenly what went wrong. Seeing the Insta of Aishwarya clearly says she was so happy. Now, this ?????”

#Aishwarya was so happy for Appa #Rajinikanth & husband #Dhanush when they won the award few months ago.Suddenly w… https://t.co/2wlBbpXhVc

Fans reminisced the happy times the couple shared by revisiting the photo and saying, “Just a couple of months ago you gave us this to believe and now…”

Another added, “This post made me happy a couple of months back, but now the same makes me sad.”

“What can happen in three months,” another asked. 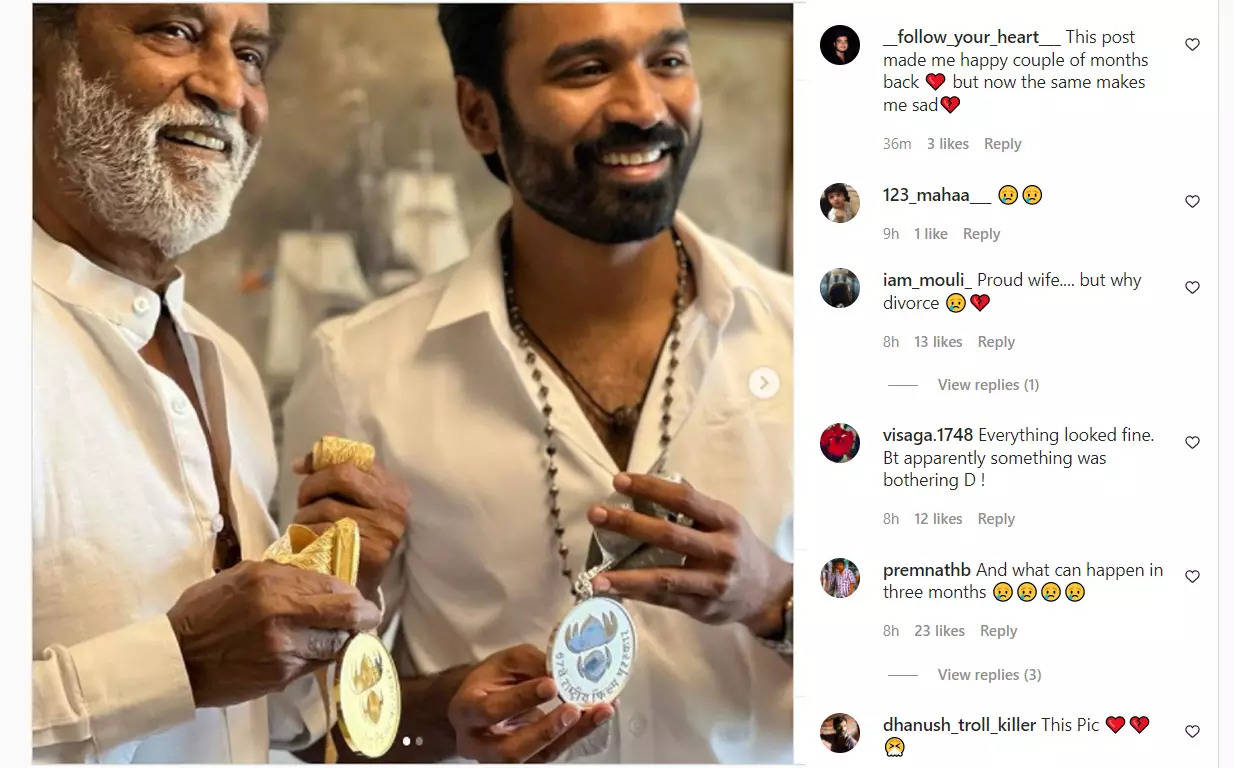 Aishwaryaa made headlines in October for her heartfelt post dedicated to Rajinikanth and Dhanush for their wins at the 67th National Film Awards. While Rajinikanth received his Dadasaheb Phalke Award, Dhanush won the Best Actor Award.

Sharing a photo of herself with her dad and hubby, Aishwaryaa, wrote: “They are mine… and this is history #prouddaughter #proudwife.”
Dhanush and Aishwarya tied the knot in 2004 and are parents to two sons, Yatra and Linga.
On the work front, Aishwaryaa directed films like the Tamil romantic thriller ‘3’ and black comedy ‘Vai Raja Vai’. Dhanush, also a producer, was recently seen in the Aanand L Rai directed Hindi romantic drama ‘Atrangi Re’ and will next be seen in the Hollywood film ‘The Gray Man’ co-starring Chris Evans, Ryan Gosling and Ana de Armas.