Babil Khan: I don’t want to plan my career – Exclusive

Movie Magic: 2016 has come and gone and with it the cinematic offerings from Holly, Bolly, Tolly and all other woods over the world.

A recap of the hits and misses from last year seemed a good way forward since last year’s releases are this ones TV viewing and some circumspection needs to be show for that as well. Here goes….

Starting with the last, which was the best, “Dangal” wowed audiences across the country from Christmas Eve onwards. The true life story of wrestler Mahavir Singh Phogat and his daughters Gita and Babita appealed to a large cross section of India, as is apparent from its still growing box office collections. For once, the populace seems to have chosen to spend its money well.

The film tells the simply and humorously and devoid of unnecessary histrionics. Aamir Khan as Mahavir Singh Phogat shows shades of his earlier roles and is not irritating and sanctimonious at all. The girls playing Gita-Zara Wasim and Fatima Sanaa Sheikh and Babita-Suhani Bhatnagar and Sanya Malhotra are exceptional in their Haryanvi portrayal.The entire cast is actually.

Director Nitesh Tiwari has a brought the story of a real life hero alive made it reach the masses. Let’s hope that he does many more, each as really. 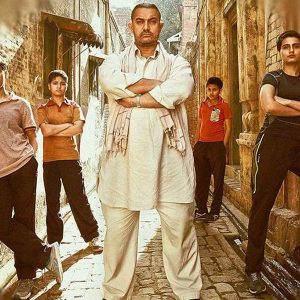 If you have not seen it-please do.

While Aligarh is one person’s story, the others are all stories from our lives and of others, which if we don’t actually go through, we read about as news. Each movie is strongly recommended. Add Kapoor and Sons to the list.

One movie which should not be missed is Happy Bhaag Jayegi the laugh riot for 2016 and must be watched for Piyush Mishra’s Urdu, the laughs and the sheer good looks of Abhay Deol and Jimmy Sheirgill.

The big ticket films were Fan, Sultan, Shivaay and Ae Dil Hai Mushkil. Fan disappointed, Sultan made millions but was a typical Salman Khan film with social messages and brawn but missed a major point it was trying to make. The latter two were embroiled in a game of nationalism thrust upon them and neither shined too brightly. ADHM had some good music and poetry to redeem it but again, lost the plot and wiped out any good feelings it might have gained.

I missed the MS Dhoni film but I plan to catch it on TV. It got good reviews.

There were of course many more releases.

The Hollywood fare I sampled was predominantly animated and all of them wonderful. Old favourites like Jungle Book in a new avatar, another meeting with Po and his team in Kung Fu Panda 3 along with Fantastic Beasts were my favourites. Zootopia and Moana were fun and celebrated bravery and friendship. The BFG brought alive a Roald Dahl story and The Secret Life of Pets was average but reasonably entertaining.

I wrapped it up with the viewing of half of La La Land which was a beautifully made but a tad unusual for a musical. Also attempted Assassin’s Creed but it was god-awful violent and difficult to stomach.

Weirdly, La La Land as a harmless love story had an “A” certification, while Assassin’s Creed with blood and gore had a “U/A” to it. Clearly the CBFC is in Ga Ga Land!

We stand at the threshold of fresh and hopefully exciting, stimulating fare from the film world. The next somewhat interesting releases are “Ok Jaanu” and “Death in the Gunj” on 13th January.

Watch this space for more and have a 2017 of your choice.