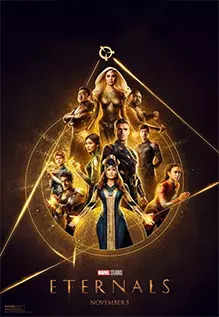 Story: Engineered and sent by the Celestials to protect humanity, the Eternals are a 10-member team of immortal beings with superhuman powers. Reporting to an all-powerful being called Arishem, the Eternals have been secretly living on Earth for thousands of years, to keep the evil Deviants at bay. Things are fine until the Deviants return and things are not as they seem.

Review: The squad springs back into action to discover that the Deviants may not be the real enemy. Led by Ajak (Salma Hayek) with healing powers, the team looks up to the powerful Ikaris (Richard Madden), a fast flier, who can shoot lasers with his eyes. Good-humoured Kingo (Kumail Nanjiani), Gilgamesh (Don Lee), Thena (Angelina Jolie), Sersi (Gemma Chan), Phastos (Brian Tyree Henry), Sprite (Lia McHugh), Makkari (Lauren Ridloff) and Druig (Barry Keoghan) complete the Eternal family. Kit Harington and our very own Harish Patel, also play significant parts. Like any other clan, these superheroes also have their set of internal disputes and tragic backstories.

What sets Eternals apart from the Avengers or the X-Men is the fact that their superpowers aren’t particularly defined or restricted to one thing alone. A few are more powerful than the rest but most can do multiple things — manipulating energy, strength, super-speed, energy-fists, magic swords, mind-control, finger-rays, illusion, matter-transformation, healing, the works. Few characters have been gender swapped. Beyond her lightning speed, Lauren Ridloff’s Makkari is also deaf and Kingo gets a Bollywood twist. Chloé Zhao ensures her team is all inclusive. By far, this is the most diverse Marvel cast ever and that is commendable. Though the main narrative is set in the present-day, portions of the film navigate ancient time periods, eras spanning 7,000 years. The canvas and scale of the story is enormous and keeping track of the ensemble cast with a distinctive past can be a lot to grasp for a viewer in one sitting. Are the events difficult to follow? No. Is it a lot to soak in? Yes. And we must say that Richard Madden’s Ikaris and Gemma Chan’s Sersi stand out in the crowd.

The new phase of Marvel is undergoing some solid undoing of their usual superhero tropes. Call it the race to keep up with the times or necessary upgrade, but superheroes no longer look like they solely belong to a certain race, age, nationality, gender or sexual orientation. And that cannot be a bad thing, right? Nor are the character introductions heroic with glam slowmo walks. The choice of filmmakers helming Marvel’s new phase itself has a story to tell. They are not necessarily comic book nerds, or people besotted with the franchise, which is usually the norm. These are acclaimed Indie directors, bringing in their unique culture, perspective, minutiae of being human and pace to the superhero universe. ‘Shang-Chi’ director Destin Daniel Cretton for instance, had created Sundance-winning films before making Marvel’s first Asian superhero movie. With Eternals, Academy Award winning director of Nomadland, Chloé Zhao sinks her teeth into the heart of American pop culture — the MCU (Marvel Cinematic Universe). Like Cretton, is Zhao’s foray into this new world of cinema, a rewarding experience for the Marvel fans?

Those who have followed Zhao’s meditative, self-reflective work will know that her language of communication is a blend of deep silences and aching words. Superhero films on the contrary, rely heavily on CGI, action and humour. It’s a strange territory for the filmmaker to cover but she brings in her own unique energy to it. Her fascination for diverse cultures, human behaviour runs deep and it shows. Nothing is surface level, made to provide instant gratification. But the underlying spiritual arc to storytelling works as a double-edged sword. The telling cinematography stays with you, even the character’s deep-rooted turmoil but not a single action sequence. The change in narrative is both refreshing and complex for fans of the MCU. A franchise that’s all about good versus evil, branching into internal good versus evil battle, taking on anonymous antagonists in an expansive plot, takes a while to sink in. To put it mildly, Zhao focusses on the inner strength of the Eternals and if you seek their external battles and power, Eternals can be sluggish and unmemorable. However, if you look for deeper meaning in life and visuals that heal; this film works its magic.