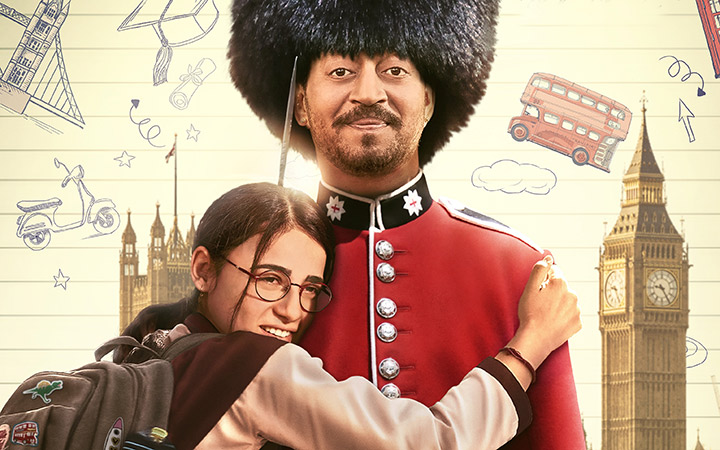 By Bollywood Hungama – Movie Review: Angrezi Medium Education-based films might not seem like profitable ventures but over the past few years, several such films have tasted enormous success like SUPER 30 [2019], CHHICHHORE [2019] and HICHKI [2018]. And the film that started this trend in recent times was HINDI MEDIUM [2017].

The film was a runaway success thanks to its message, realism, humour and performances. And now producer Dinesh Vijan is back with a second part of this franchise, titled ANGREZI MEDIUM. The film has been awaited keenly mainly because it’s a comeback of sorts for Irrfan Khan, after he was diagnosed with a neuroendocrine tumour. So does ANGREZI MEDIUM manage to entertain and impress as much as HINDI MEDIUM? Or does it fail to impress?

ANGREZI MEDIUM is the story of unconditional love between a father and daughter. Champak (Irrfan Khan) is a single parent of Tarika (Radhika Madan) and is based in Udaipur. His brother is Gopi (Deepak Dobriyal) and though both have lot of love for each other, they are also involved in a legal tussle.

Both run a shop named Ghasiteram Sweets and both claim to be the original shop running since generations. The matter reaches court where Justice Chheda (Zakir Hussain) gives a verdict in favour of Gopi. In a drunken state, Gopi later reveals that he bribed the judge which is why he won the case. Gajju (Kiku Sharda), a friend of the brothers, records this statement.

Tarika, meanwhile, is an average student and wishes to win the scholarship offered by her school that will take her to London. She works quite hard and manages to get 85% and it makes her eligible for UK scholarship. A felicitation ceremony is held for this occasion. The chief guest here is none other than Justice Chheda.

Champak, in anger, informs the crowd of the nefarious activities of Chheda, not realising that Chheda is the husband of the Principal of the school (Meghna Malik). The Principal, in anger, cancels Tarika’s scholarship. Champak promises Tarika that come what may, he’ll get her admission done, that too in the college of her choice in London.

Sadly, Tarika fails to get the admission from other quotas. Gopi suggests Champak that they contact Bablu (Ranvir Shorey), their childhood friend who is settled in London. Bablu comes to Udaipur on a plane ticket sponsored by Champak. He tells Champak that he can help him get British citizenship after which Tarika can get admission easily.

Champak, Gopi and Tarika reach London airport. Here, Champak and Gopi are mistaken for drug dealers. They are deported back to India while Tarika is stranded in London.

What happens next forms the rest of the film.

Homi Adajania’s direction is decent. He gets brownie points for the scenes involving Champak and Gopi as these scenes and their performances elevate the impact. Also the scenes of Champak and Tarika at some places will be loved. The Indian audiences, especially the middle aged and senior citizens, would connect with the message of children often leaving them after turning adults.

On the flipside, the film has too many subplots that are difficult to digest. Audiences will find it strange that Champak and Gopi are business rivals and even fighting it out in the court. But at the same time, they even drink and hang out together like best of buddies. Not just that, Gopi doesn’t even mind when Champak leaks his video where the latter brags that he bribed the judge! The manner in which Champak and Gopi get deported over a misunderstanding seems stupid.

Tarika, meanwhile, gets settled in London and finds a job and house, even before her admission is done. She doesn’t ask Champak even once how they’ll manage to procure funds. Also the track of Naina and her mother Mrs. Kohli (Dimple Kapadia) seem totally unwanted. Audiences never come to know why they are at loggerheads.

ANGREZI MEDIUM starts on an average note, depicting the life of Champak and Tarika, and also the feud between Champak and Gopi. The latter part seems bewildering though as their love-hate relationship. A few scenes here stand out like a drunken Tarika accusing Champak of being intoxicated, the madness at the court and at the school ceremony. The father-daughter bond touches viewers. The intermission point is unconvincing. Post-interval, the film drops at places thanks to too many confusing developments and too many subplots. Thankfully, a few genuinely novel moments stand out here like Tarika turning her T-shirt into a crop top to fit in among her new London friends, Gopi tying Champak to his bed and Champak and Gopi rescuing Mrs. Kohli and later singing Happy Birthday song for her. Also the finale might leave viewers teary eyed.

Hey Sreeleathers Gurgaon(@Sreeleathersggn), thank you for following me

Hey Balli Rana(@inqurbleoptimus), thank you for following me

Hey advocate sachin bali(@AdvocateBali), thank you for following me

Jamtara callers are back, this time promising home delivery of booze

Hey Sreeleathers Gurgaon(@Sreeleathersggn), thank you for following me

Hey Balli Rana(@inqurbleoptimus), thank you for following me

Hey advocate sachin bali(@AdvocateBali), thank you for following me

TBT: Irrfan on working with Rishi in ‘D-Day’

ABOUT US
Stay in Gurgaon Portal for News, Views, Events, Happenings, Restaurants & much more. For Everything Gurgaon: Stay in Gurgaon. We promise to be a fair and objective portal, where readers can find the best information, recent facts and entertaining news.
FOLLOW US
© Stay in Gurgaon | All rights reserved