HRIDC, REMCL sign MoU for joint development of renewable energy for the HRIDC projects in Haryana

Zayn Khan: Lucky to have Imran bhai guide me 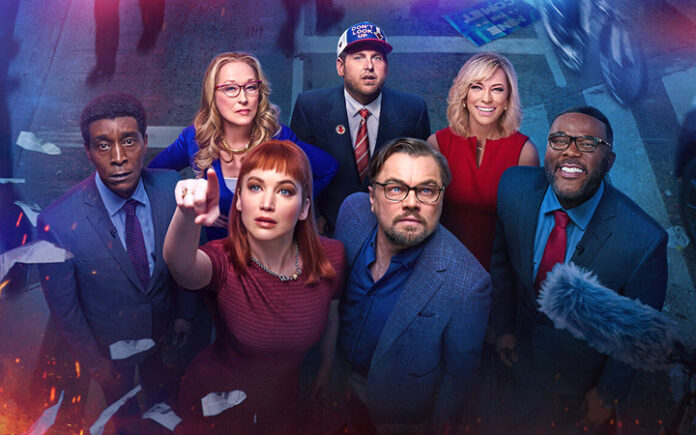 DON’T LOOK UP is the story of two astronomers trying to warn the world about an impending disaster. Kate Dibiasky (Jennifer Lawrence), an astronomy student at Michigan State University, discovers a Comet that is directly approaching Earth. Her professor, Dr. Randall Mindy (Leonardo DiCaprio), makes the calculations which prove that the Comet is 5 to 10 kms wide and that it’ll approach Earth in 6 months and 14 days. It is so huge that it will turn out to be a ‘planet killer’. They run their findings with scholar Teddy Oglethorpe (Rob Morgan), who confirms that their calculation is bang-on. The trio immediately reaches White House to meet the USA president, President Janie Orlean (Meryl Streep). She is however in the midst of a controversy – her Supreme Court nominee has turned out to be an ex porn star. Since she’s busy with this scandal, she is able to give them an audience only the next day. Janie and her son, Chief of Staff Jason (Jonah Hill), moreover, don’t take the threat seriously. They argue that even in the past, many had made such the-world-is-ending predictions and all of it turned out to be a hoax. Nevertheless, they promise that they’ll assess the situation. With no other option, Kate, Dr Mindy and Oglethorpe leak the information to the press, through Kate’s boyfriend Philip (Himesh Patel). The article on their findings appears in The Washington Herald. Philip also arranges Dr Mindy and Kate’s appearance in the famous TV chat show, The Daily Rip, hosted by Brie Evantee (Cate Blanchett) and Jack Bremmer (Tyler Perry). Sadly, their appearance on the show happens before that of the famous pop star, Riley Bina (Ariana Grande). On live TV, she admits that she misses her ex-boyfriend, a fellow celeb, DJ Chello (Scott Mescudi). DJ Chello, through a video call, speaks to DJ Chello and they patch up. The moment goes viral on social media. As a result, Kate and Dr Mindy’s warning kind of goes unnoticed. Kate also gets enraged by the keep-it-light-and-funny mantra of the show hosts and she loses it. She ends up becoming meme material. Kate, Dr Mindy and Oglethorpe are deciding their next course of action when suddenly they are nabbed by the FBI and taken to the White House. What happens next, forms the rest of the film. 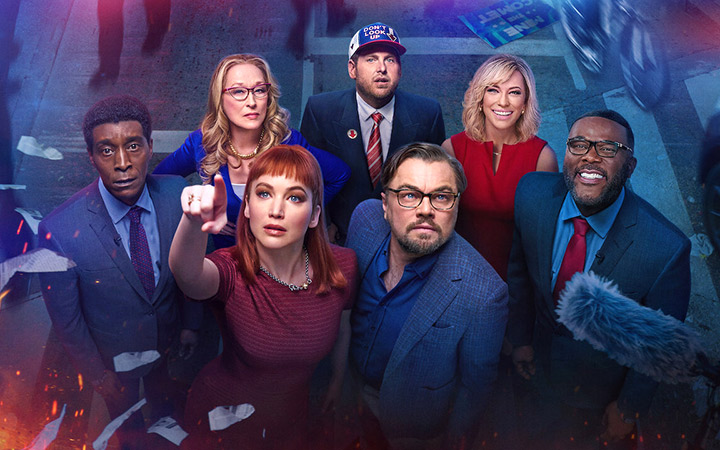 Adam McKay and David Sirota’s story is incredible and at the same time, it’ll be difficult to digest for some audiences. Adam McKay’s screenplay is unique and full of entertaining moments. The dark humour bit is kept intact from start to finish and it also makes an important comment on social media, politics and many other issues. At certain places, the film gets quite serious and a bit disturbing and the change of tone happens organically. Dialogues bring the house down. The one-liners overall are also quite relatable and uses the lingo of today’s times.

Adam McKay’s direction is as novel as his execution. He has proved his worth with films like THE BIG SHORT [2015], VICE [2018] etc, and his films are executed in a certain way. With DON’T LOOK UP, he goes one step ahead as he takes the madness quotient many notches higher. The film has too many characters and a lot is happening besides the impending Comet. It’s praiseworthy how he seamlessly incorporates all these bits in the film and that too in just 138 minutes of run time. The central idea of the film is that the world is getting over but no one is taking it seriously. It’s difficult to pull off a film with such a plot. But Adam succeeds very well. However, at a few places, the film gets into a zone where it seems like the makers are trivializing the issue. The climax will leave audiences divided. In fact, much of the second half will have its critics. To see how the world takes the issue lightly, even when the Comet gets visible to the naked eye, gets a bit unconvincing.

DON’T LOOK UP’s opening scene is not as engaging. But the film goes on another level once Kate, Dr Mindy and Oglethorpe are made to wait in the White House for hours and even made to pay for free snacks! Their conversation with the President is hilarious and same goes for Kate and Dr Mindy’s appearance on The Daily Rip. The twist in the tale at the mid-point is unpredictable. The track of billionaire Peter Isherwell (Mark Rylance) takes centre-stage and it gives a nice touch. The film continues to hold interest but as mentioned above, the goings-on become a bit too convenient, considering the threat faced by mankind in the film.

DON’T LOOK UP has several prominent actors and all of them are utilized well. Leonardo DiCaprio might seem to be playing a very boring and a niche character. But he’s very entertaining and with his performance, he proves yet again that he’s one of the greatest actors of our times. Jennifer Lawrence probably has the maximum screen time and is too good in her complex role. Meryl Streep is flawless as always and her character seems to be taking a dig on a certain ex-President. Jonah Hill is dependable and only he could have pulled off a character like this. Cate Blanchett leaves a huge mark. Mark Rylance had a difficult role to essay but passes with flying colours. This is yet another Oscar-nomination worthy performance from him. Timothée Chalamet (Yule) is efficient in a cameo and adds to the star appeal. Rob Morgan is missing in between but dominates the beginning and climax to an extent. Himesh Patel, Tyler Perry, Ariana Grande, Scott Mescudi, Ron Perlman (Benedict Drask), Melanie Lynskey (June Mindy) and Paul Guilfoyle (General Themes) do well in their small roles. Chris Evans (Devin Peters) is hilarious in a cameo. Ishaan Khatter also appears in the film for around 10 seconds.

Nicholas Britell’s music is in sync with the filmmaker’s approach and the film’s narrative. Linus Sandgren’s cinematography is neat. Clayton Hartley’s production design is appropriate. Susan Matheson’s costumes are realistic and the ones worn by Meryl Streep, Cate Blanchett and Timothée Chalamet are memorable. VFX is a bit tacky in the post-credit scene but is great in the scenes of the Comet. Hank Corwin’s editing is creative and the quick cuts add a lot to the film.

On the whole, DON’T LOOK UP is a crazy black comedy that works despite the unbelievable plot. Thanks to the entertainment quotient and the ensemble cast, it has the potential to emerge as one of the most viewed films on Netflix.