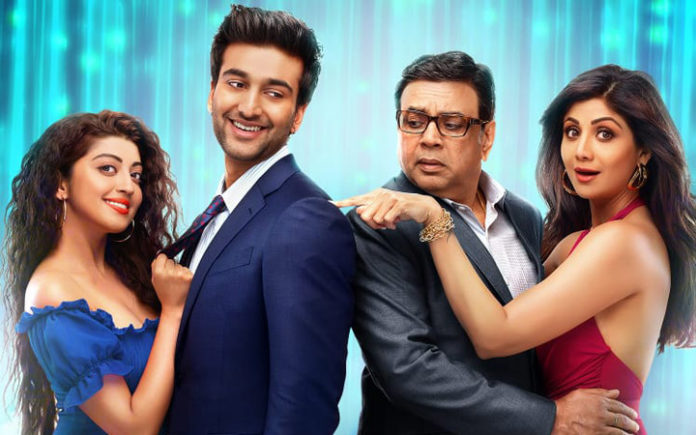 Post HERA PHERI [2000], Priyadarshan had become a force to reckon with in Bollywood. His comic capers have a lot of characters and subplots but also tons of humour and it’s no wonder that he developed a strong fan following. After staying away from Bollywood for around 8 years, the master director is back with HUNGAMA 2. The first part, released in 2003, was a laugh-a-minute riot and is remembered fondly even today. Does HUNGAMA 2 emerge as funny as or better than part 1? Or does it fail to impress? Let’s analyse. 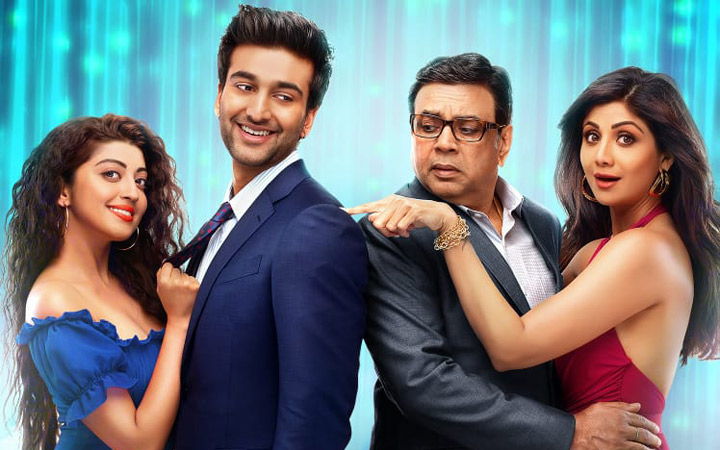 HUNGAMA 2 is the story of a man in trouble after his ex-flame arrives at his house and causes ‘hungama’. Akash Kapoor (Meezaan Jafri) stays with his father, Colonel Kapoor (Ashutosh Rana), sister, his brother’s children and a butler, Nandan (Tiku Talsania). He works in an office and his colleague is Anjali (Shilpa Shetty Kundra), a family friend. She is married to Radhe Shyam Tiwari (Paresh Rawal), a good-for-nothing advocate who is always suspicious that Anjali is cheating on him. Akash is about to get married to a girl named Simran, daughter of M G Bajaj (Manoj Joshi), a friend of Kapoor. All is going well for Akash until one day, his ex-girlfriend, Vaani (Pranitha Subhash) arrives at his residence with her daughter, Gehna. She claims that Akash impregnated her when they were dating and studying in college and then ran away. Akash, at first, refuses to even accept that he knows Vaani. But later, he admits that they were in a relationship. But he assures Colonel Kapoor that Gehna is not his daughter. Kapoor doesn’t know whom to believe. The DNA test is done which proves that Akash is the father. Kapoor is devastated since Akash’s engagement with Simran is fixed. He keeps Vaani hidden from Bakshi and everyone else till he finds out the truth. Akash, meanwhile, still claims that he’s not the father and he approaches Anjali for help. Anjali meets Kapoor to discuss the matter. Kapoor requests Anjali not to reveal about Vaani and Gehna to anyone, not even Radhe. She agrees. When she goes home, she lies when Radhe asks where she had gone. Radhe then begins to follow her secretly and overhears her conversation with Akash. Both are discussing about pregnancy and a baby. Radhe assumes that Anjali is pregnant with Akash’s child. What happens next forms the rest of the film.

Priyadarshan’s story is promising and has all the ingredients of a solid, complex entertainer that he’s famous for. But Yunus Sajawal’s screenplay spoils the show. The narrative is all over the place. There are too many characters and subplots and are not stitched together well. Also, logic takes a backseat. This usually happens in comedy films but here, it reaches unbelievable levels. Manisha Korde and Anukalp Goswami’s dialogues try their best to contribute humour and drama but it’s not upto the desired level.

Priyadarshan’s direction is average. He’s laced with a poor script and that further diminishes the impact. In the past, he has exceled with comedies where there are far too many characters and misunderstandings. How he used to manage to smoothly execute the madness despite challenges used to be his USP. The filmmaker tries to replicate his formula but doesn’t succeed. The basic plot is such that the film could have been funny from start to finish. But the humour is very weak and also the funny situations are few and far between. He doesn’t even do justice to some of the subplots. Even the answer to the mystery behind the sudden appearance of Vaani at the Kapoor family’s residence is silly. On the positive, a few scenes here and there do manage to raise laughs but obviously it’s not enough.

HUNGAMA 2 begins on a dull and serious note. The track of Gagan Chandra D’costa (Johny Lever) and that of the kids does raise a few laughs. But the kids then disappear and re-emerge only in the second half. This makes it clear that things are going to happen at random in the film. A few scenes that stand out and are actually funny are Nandan discussing the contents of the DNA report and Popat Jamal (Rajpal Yadav) claiming to be Vaani’s husband. Popat also single-handedly contributes to the humour in the climax. But as mentioned before, it was not enough. Ideally, the whole film should have been hilarious, just like the first part.

Meezaan Jafri is strictly okay. The actor tries his best but in some scenes, his comic timing is not upto the mark. A role like this required a far more talented actor. Pranitha Subhash puts up a confident act and leaves a mark. Shilpa Shetty looks ravishing and proves that she can still deliver a fine performance. Sadly, her screen time is limited. Paresh Rawal’s track is funny but the humour is weak. Performance-wise, he’s first-rate. Ashutosh Rana has a lengthier and even stronger role. He goes a bit overboard but manages to entertain. Tiku Talsania also gets his act right, especially in the DNA report scene. Manoj Joshi is alright. Rajpal Yadav has a small role but brings in big laughs. Johny Lever is good in the cameo. Akshaye Khanna is nothing great in the special appearance. The child actors do well but their track is not well utilized. The actors playing Meezaan’s sister and brother are average.

Anu Malik’s music is forgettable. ‘Chura Ke Dil Mera 2.0’ is the best of the lot because of Shilpa’s sensuous moves. ‘Pehli Baar’, ‘Chinta Na Kar’, ‘Aao Chalein Hum’ and ‘Hungama Ho Gaya’ are disappointing. Ronnie Raphael’s background score is better and is in the Priyadarshan zone.

Ekhambhram N K’s cinematography is breath-taking. The locales of Manali are well captured. Selvakumar’s production design is very superior. In fact, the film looks like a rich product. The costumes are glamorous, especially the ones worn by Shilpa Shetty. M S Aiyyapan Nair’s editing could have been tighter.

On the whole, HUNGAMA 2 is not as funny as one expects it to be. The film suffers due to the long length, insipid script, weak humour and lack of logic. A major disappointment.