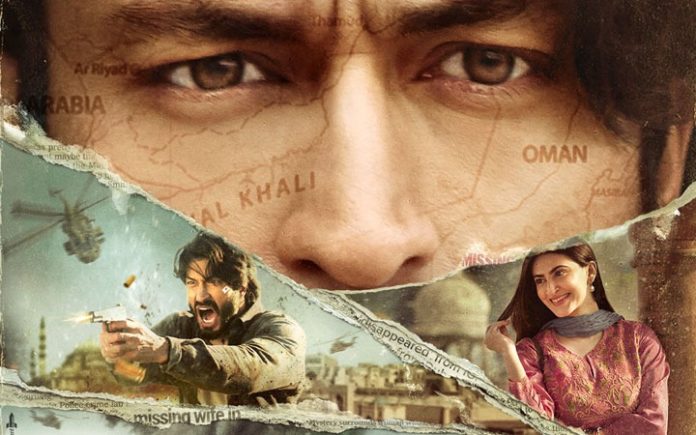 Over the last few weeks, viewers got a chance to see biopics of extraordinary personalities like Gunjan Saxena and Shakuntala Devi. But these are personalities whose greatness is already known to an extent. There are many who have done unbelievable feats in their lives and hardly anyone would be aware of it. Faruk Kabir, who has made ALLAH KE BANDAY [2010] and a couple of web series in the past, tells one such story in his latest outing, KHUDA HAAFIZ. It stars Vidyut Jammwal, who has created a fan base of his own thanks to his action films. So does KHUDA HAAFIZ manage to entertain and thrill? Or does it fail to impress? Let’s analyse. 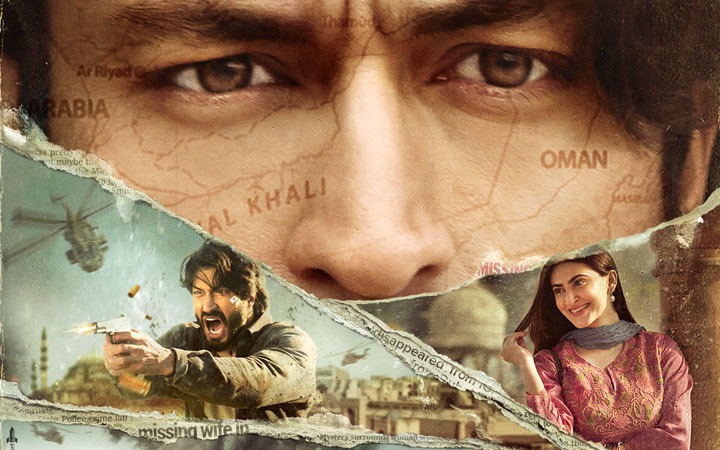 KHUDA HAAFIZ is the story of a simple man whose wife goes missing under mysterious circumstances in a foreign country. In October 2007, Lucknow-based Sameer (Vidyut Jammwal), a software engineer, gets into an arranged marriage with Nargis (Shivaleeka Oberoi). Both fall in love with each other in no time. All is going well until recession strikes the world. Sameer has to shut down his business. Even Nargis is fired from her workplace. They hunt for jobs but three months pass and they fail to get employment. With no other choice, they apply for a job in the Middle-Eastern country of Noman through an agent named Nadeem (Vipin Sharma). Nargis gets the job first and she is asked to leave for Noman the very next day. Sameer is apprehensive but Nadeem assures that she’ll be safe there. He also tells Sameer that the latter’s job confirmation notice should also come within 5-6 days and then he can unite with his wife. Nargis thus flies alone to Noman. Next day she calls Sameer and appears distressed. She is crying and she tells him that this isn’t the job she signed up for. Before she could say anything else, the phone call ends. A shocked Sameer lands up at Nadeem’s office along with the cops. Nadeem feigns ignorance. Sameer immediately flies to Noman’s capital city, Noor Us Saba where Nargis has supposedly got the job. Outside the airport, Sameer meets a kind-hearted taxi driver, Usman Ali Murad (Annu Kapoor) and he tells him to take him to the address of Nargis’s workplace. Usman tells him that this address is incorrect. The cops at Noor Us Saba refuse to help him till he gets an approval from the Indian Embassy. At the embassy, he doesn’t get timely help as the top officer I K Mishra (Ikhlaque Khan) is away. Sameer now has only one clue – the phone number from where he got Nargis’s call. From the mobile company, he manages to find out the name and address of the person owning the number. It turns out to be that of a person named Parvez Shirazi who resides in a town named Baith Us Saif, located 300 kms away. Sameer reaches there immediately. Coincidentally, it’s also the hometown of Usman and he helps him in the search. They realize that Parvez is involved in flesh trade. Sameer’s world comes crashing down. Nevertheless, he goes to the brothel, impersonating as a client and manages to locate Nargis. The pimp (Gowhar Khan) however realizes that Sameer knows her and attacks. Sameer too fights back but fails to rescue Nargis. He and Usman escape and are chased by the goons. They almost manage to run away but then meet with a minor accident. The cops land up and arrest Sameer. What happens next forms the rest of the film.

Faruk Kabir’s story is quite interesting and fit for a commercial film. The first 30-35 minutes might remind one of BAAGHI 3 [2020] which also dealt with the protagonist’s close family member disappearing in a middle-eastern country. Moreover, BAAGHI 3 also shows the protagonist finding out about his brother’s disappearance while he was on a call with him! Thankfully, once Sameer reaches Noman, the film doesn’t even seem remotely similar to the Tiger Shroff starrer. Faruk Kabir’s screenplay is engaging. The film moves at a great pace and the focus is on the principle plot from start to finish. But there are times when the film moves too fast and hence, one might not get emotionally attached to certain characters. Faruk Kabir’s dialogues are decent.

Faruk Kabir’s direction is quite good. On the positive side, the film is quite fast-paced. There are some great dramatic and action moments that sustain interest. Also, the director deserves praise as he doesn’t make the film looks sleazy despite the fact that it deals with trafficking and sex trade. Also, no item song is added for the heck of it. On the flipside, the film has its share of cinematic liberties. The manner in which Sameer manages to escape from the brothel and even from the airport raises eyebrows. Sameer’s very final fight could have been better thought of. Lastly, the courtship period of Sameer and Nargis is shown too quickly and perhaps a little more time could have been taken to explore their relationship for a better impact.

KHUDA HAAFIZ begins on an intriguing note. Sameer is already captured by the cops on foreign soil and then the film goes on a flashback mode as he narrates his tale to the Indian Embassy official. Not much time is spent in showing how love blossomed between Sameer and Nargis and their eventual marriage. The director soon comes to the point where Nargis leaves for Noman and how she disappears. Sameer reaching Noman and trying to locate his missing wife keeps the interest going. The best part of the first half obviously is when Sameer goes on a rampage in the brothel in Baith Us Saif and then has a dramatic escape. The entry of Faiz Abu Malik (Shiv Panditt) and Tamena Hamid (Aahana Kumra) add to the madness. The film also slips in the middle of the second hour. But it picks up in the final act once Sameer reaches the place of Itzak Regini (Nawab Shah). From here till the finale, the film keeps one at the edge of the seat.

Vidyut Jammwal plays a common man here and does his share of action. Performance-wise, he is decent and shines in some emotional scenes. Sadly, in a couple of places, he goes a bit over the top. Shivaleeka Oberoi doesn’t get much scope but is fine and has a good screen presence. Annu Kapoor is excellent and quite endearing. Shiv Panditt leaves a mark with his performance and accent, despite his late entry. Same goes for Aahana Kumra. Ikhlaque Khan is passable. Nawab Shah plays the villainous role well. Vipin Sharma is dependable as always. Gowhar Khan, Shahnawaz Pradhan (Sameer’s father), Gargi Patel (Sameer’s mother), Mohit Chauhan (Nargis’s father), Suparna Marwah (Nargis’s mother), Rio Kapadia (ISA Commissioner Ali Azam Ghazi), Tamara Mirmahsudova (Usman’s wife) and Kinal Muchhala (Sonia Singh; employee at Indian embassy) are fine.

Mithoon’s music is nothing great. The film doesn’t have the scope for music. The title song stands out a bit because of the Arabic feel while ‘Aakhri Kadam Tak’ registers a bit because of the situation in which it’s played. ‘Jaan Ban Gaye’ and ‘Mera Intezaar Karna’ are forgettable. Amar Mohile’s background score is quite better and exhilarating. Jitan Harmeet Singh’s cinematography is spectacular and the various locales of Uzbekistan are well captured. Bijon Das Gupta, Ranjit Singh and Prerna Kathuria’s production design are authentic. Divvya Gambhur and Nidhhi Gambhir’s costumes are appealing and in sync with the character’s ethnicity. Ivanov Victor and Andreas Nguyen’s action is very violent and gory. It’s definitely not for the faint-hearted. NY VFXWaala’s VFX is fair. Sandeep Francis’s editing is rapid.

On the whole, KHUDA HAAFIZ is a well-paced action thriller that works chiefly due to the script, direction and performances of Vidyut Jammwal and Annu Kapoor.