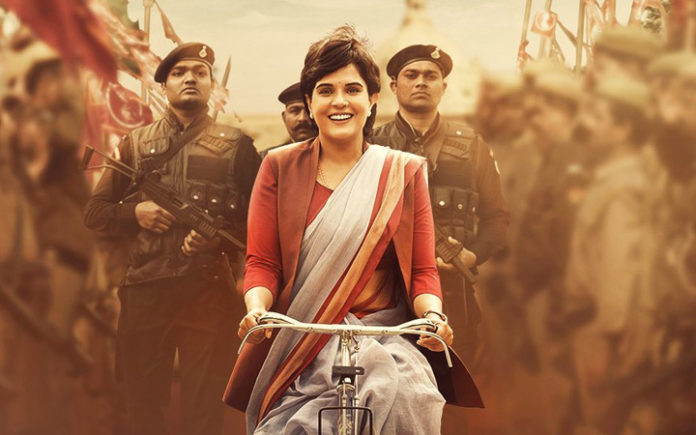 Politics is an important component of our society and in recent times, with the advent of social media, it has become popular even among the youth who earlier weren’t that interested. However, the same wasn’t reflected in our films. We have obviously had plenty of films involving politicians but a fictional film revolving around the life of a neta was rare. Most of them which were released recently like THACKERAY [2019], THE ACCIDENTAL PRIME MINISTER [2019] and PM NARENDRA MODI [2019] were biopics. MADAM CHIEF MINISTER, directed by Subhash Kapoor of JOLLY LLB fame, which has released today, fills up this space. It’s not a biopic and serves as a fictional political thriller. The trailer and some of the parallels with the life of ex-Uttar Pradesh chief minister Mayawati have caught some attention. So does MADAM CHIEF MINISTER emerge as an entertaining political fare? Or does it fail to entice? Let’s analyse. 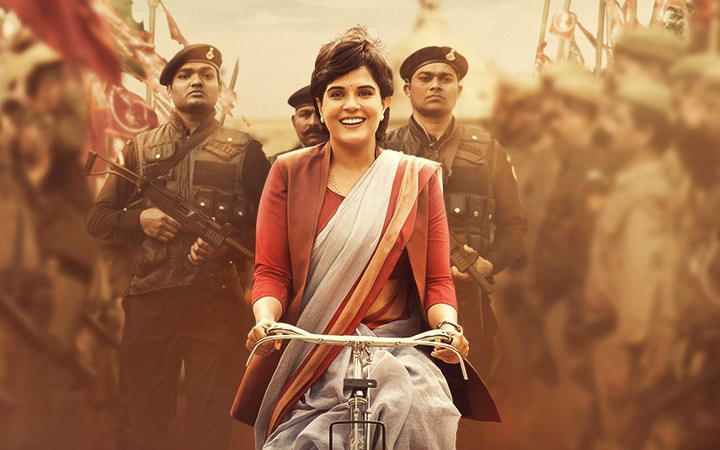 MADAM CHIEF MINISTER is the story of a girl who rises from being a nobody to the most powerful woman in Uttar Pradesh. Tara Roopram (Richa Chadha) is born in 1982 in a village in Uttar Pradesh. The same day, her father, Roopram (Mukteshwar Ohja) is killed by members of a higher caste. Tara’s grandmother, who is anyway upset with her birth since she’s the fourth daughter in the family, gets enraged when she learns about the demise of Roopram. She accuses Tara for this tragedy and is about to kill her. But Tara’s mother (Seema Modi) stops her from doing so. Many years later, Tara is grown up and works as a librarian in a university. She is in a physical relationship with Indramani Tripathi (Akshay Oberoi), a political heir and a politically active student in the university. One day, Tara tells Indramani that she’s pregnant and that she wishes to marry Indramani. To which Indramani makes it clear that it’s not possible because of caste differences. He advises her to abort the child. She refuses and threatens to expose him. His goons attack her when she’s working in the woods. However, she’s saved by the men of Master Surajbhan (Saurabh Shukla), who belongs to the Parivartan Party of India, which fights for the lower caste and downtrodden people. Tara is indebted to Master and she starts living with him and even working for his party. She picks up the workings of politics quickly. Some time before the state elections, she advises Master to form an alliance with Arvind Singh (Shubrajyoti Barat) of the Vikas Party, who had approached Master for a political partnership. Master sends Tara to meet Arvind Singh and convince him about the terms that Master has. Tara succeeds. When no one is ready to fight elections against the sitting CM, Tara takes up the challenge. She impresses the junta with their fiery speeches. She also fakes an attack on herself to gain sympathy. All these reasons help her defeat the sitting CM in the elections. As per the alliance terms, for the first 2½ years, a candidate of Parivartan Party of India will serve as the Chief Minister. The party members select O P Kushwaha (Sangam Bhaguna) due to his seniority and political experience. But, Master vetoes the decision and makes Tara the Chief Minister. She shifts to the CM’s sprawling residence. She gets her mother to stay with her who is obviously proud of Tara’s achievements. Meanwhile, her OSD (Officer on Special Duty), Danish Khan (Manav Kaul) informs her about the MLAs of the Vikas Party who are selected by Vikas Singh to serve in the cabinet. All of them are close to Vikas, as a friend or family member, and one of them is none other than Indramani Tripathi! Tara is angry that someone who tried to kill her will become a Cabinet Minister. She tries her best to ensure he doesn’t get the minister’s post. What happens next forms the rest of the film.

Subhash Kapoor’s story is promising in parts. After RAAJNEETI [2010], we haven’t really had a fictional political flick. It’s commendable that the writer researched well and managed to come up with some interesting sequences, many of which are based on common political tactics like unholy political alliances, horse trading etc. But Subhash Kapoor’s screenplay doesn’t do complete justice. The first half has some goofs which one tends to overlook in favour of the many plusses in the film. But in the second half, these minuses get amplified and affect the impact. Subhash Kapoor’s dialogues are realistic and sharp at places. However, the catchphrase used by Tara during her speeches ‘Main tumhari hoon’ could have been better thought of and more hard-hitting.

Subhash Kapoor’s direction is exceptional at places but otherwise, it’s quite pale, especially in comparison to his past films. What’s surprising from the very start is that the film moves too quickly, which is not really Subhash’s style. At first, one feels great since a fast-paced narrative can also mean a better narrative. But in the process of rushing through things, the director skips a few developments, which leave the viewers confused. For instance, why doesn’t Tara go ahead with the pregnancy and when is it that she changes her mind is never depicted. Secondly, a member of Master’s party Sundar (Boloram Das) does a heinous act of betrayal. Sadly, his track is forgotten completely in the second half. The finale seems a bit abrupt. Ideally, the makers should have reversed the chronology. The poisoning bit track should have been followed by the horse-trading sequence as the latter was quite powerful. If the film had ended with this said action-packed track, the impact would have been there. Sadly, the vice versa happens. So a fantastic sequence is followed by a disappointing one and hence, the audience comes out of the theatre feeling not-so-impressed. 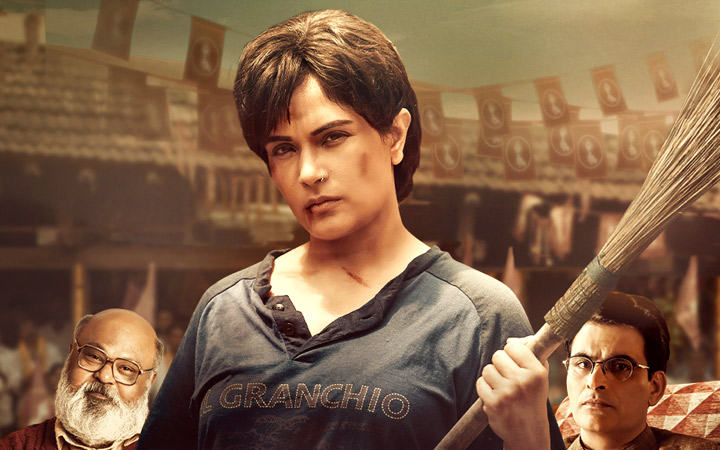 MADAM CHIEF MINISTER has a decent beginning, explaining the caste wars prevalent in rural areas. The introduction of adult Tara and her relationship with Indramani is quickly explained and depicted. But it’s when Master Surajbhan enters the narrative that the film gets better. The pure bond that he shares with Tara is heartening. The execution seems a bit jerky at places but one doesn’t mind much here as there’s a lot happening in the film. Two scenes that really stand out here are – Tara forcing herself and other lower castes people into the temple; and the other one is when she forcefully tonsures Indramani. The intermission point is arresting. Post-interval, the film zooms like a rocket as Tara ‘kidnaps’ MLAs from Vikas Party and holds them in a guest house. The drama that ensues here is sure to keep one at the edge of the seat. Sadly, from here on, instead of maintaining this high, the film falls. The track of the CM being slowly poisoned is unpredictable but doesn’t really create the desired impact as it’s flawed. The finale is well thought of but again, it lacks the punch.

Speaking of performances, Richa Chadha does justice as she puts up a confident and convincing performance. The best part about her performance is that she understands Tara well. She goes overboard as Tara plays to the gallery while giving speeches but she also draws a line so that it doesn’t seem like a ham performance. Saurabh Shukla is lovely and all his scenes are engaging. Manav Kaul is dependable always but is let down by the script in the pre-climax and finale. Akshay Oberoi leaves a huge mark. One wishes that he had more screen time. Shubrajyoti Barat is fine as the villain. Boloram Das is fair. Sangam Bhaguna, Mukteshwar Ohja and Seema Modi don’t get much scope. Nikhil Vijay (Babloo) played a half-baked character and it seemed like he was trying to imitate popular actor Dhanush. Raviza Chauhan (Shashi Rai) is great. Shreya Awasthi (Dr Laxmi), Alok Sharad (Judge) and the actor playing judge Supriya Tiwari are okay.

Mangesh Dhakde’s music is wasted. Ideally, this should have been a songless film. ‘Chidi Chidi’ is forgettable. Mangesh Dhakde’s background score, however, is dramatic and has a commercial vibe. Jayesh Nair’s cinematography is spectacular.

On the whole, MADAM CHIEF MINISTER boasts of an interesting idea and fine performances by Richa Chadha and Saurabh Shukla. But the loopholes in the script and a disappointing and abrupt finale spoil the show. At the box office, it will struggle to get footfalls as it has been released without any awareness.