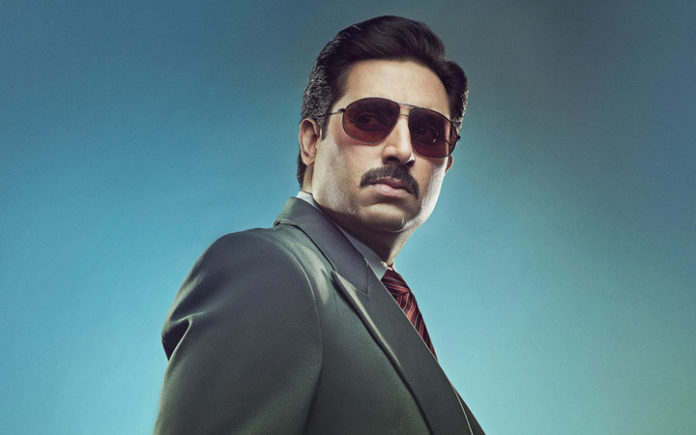 Actor Abhishek Bachchan’s career has seen a lot of ups and downs. But one can’t deny that he is a powerful performer, as proven by his work in films like YUVA [2004], DHOOM [2004], SARKAR [2005], GURU [2007], DOSTANA [2008], PAA [2009], BOL BACHCHAN [2012], etc. After taking a break of nearly 2 ½ years, he returned to the big screen with a stellar act in MANMARZIYAAN [2018]. In the past one year, he has made his mark on digital with the web series BREATHE: INTO THE SHADOWS [2020] and the crazy comedy LUDO [2020]. Now he’s back with another web venture, THE BIG BULL. The trailer has been liked and there’s a curiosity to see what it has to offer, despite the subject being similar to SCAM 1992, arguably the most successful web series of India. So does THE BIG BULL manage to stand out and impress the audiences? Or does it fail? Let’s analyse. 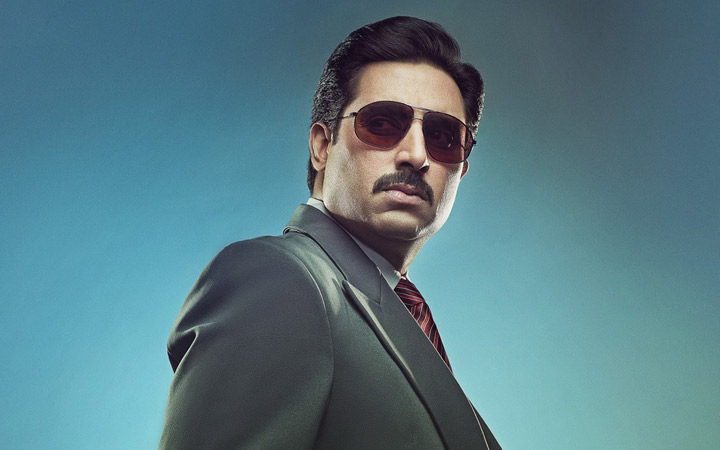 THE BIG BULL is the story of a common man’s journey from rags to riches. The year is 1987. Hemant Shah (Abhishek Bachchan), a resident of Bombay, is working at Bal Kala Kendra on a modest salary. He is in love with Priya (Nikita Dutta), his neighbour but since he’s not financially secure, he’s apprehensive about asking her father for her hand in marriage. One day, a parent of one of the kids, who comes to practice at Bal Kala Kendra, tells Hemant that after selling stocks of Bombay Textile, he’s able to earn a nice moolah. This makes Hemant curious about the world of stocks. Meanwhile, his brother Viren Shah (Sohum Shah) loses a large amount of money in stocks. Viren is in debt and Hemant decides to invest in Bombay Textile’s shares. But he does his homework before doing so. This enables Hemant to not just make Viren debt-free but also earn a neat little profit. In no time, Hemant enters the world of stocks and starts working for a stock trader named Kantilal (Hitesh Rawal). Hemant aspires to have a trading account but as per the rules, he needs to pay Rs. 10 lakhs for it. In order to earn the said amount, Hemant joins hands with union leader Rana Sawant (Mahesh Manjrekar) of Premier Auto. His insider trading activity soon helps him earn Rs. 10 lakhs. Hemant starts to now manipulate stocks and even gets banks on board to exploit the loopholes in the system. All this takes the sensex to dizzying heights. Thus, he becomes a hero of sorts among stock brokers. Since his financial condition improves, he marries Priya. While everyone is hailing Hemant Shah, Meera Rao (Ileana DCruz), the finance journalist at India Times newspaper, is least impressed. She’s confident that Hemant is illegally making money at the stock exchange. She writes critical articles about him. And one day, she stumbles upon shocking evidence about Hemant’s nefarious activities. What happens next forms the rest of the film.

Kookie Gulati and Arjun Dhawan’s story is interesting. It is inspired from the life of Harshad Mehta, the infamous stock broker, and his experiences were fascinating, cinematically. Kookie Gulati and Arjun Dhawan’s screenplay is effective at most places. The writers have tried their best to make the goings-on as entertaining and as dramatic as possible for a better impact. They succeed, but not fully, for two reasons. One, they have edited out several important events from Hemant Shah’s life and have made it too fast-paced. Secondly, the comparisons with SCAM 1992 take away the impact to some extent. Ritesh Shah’s dialogues, however, are sharp.

Kookie Gulati’s direction is decent. He had the challenge of not just keeping the goings-on entertaining but also easy to comprehend. This is because not everyone understands the concept of stocks and shares. And Kookie succeeds to an extent at both the aspects. On the flipside, one can’t help but draw parallels with SCAM 1992. Even if one tries his/her best, one can’t forget the Pratik Gandhi-starrer web series as it was highly memorable. And it was handled in a much better manner. One wishes if THE BIG BULL had released before SCAM 1992 as then, it would have been more entertaining and interesting for viewers. Now, since most of the target audience of THE BIG BULL have already seen SCAM 1992, one already knows more or less the entire story. Hence, one knows in advance what’s going to happen. Thankfully, the writers have fictionalized some plot points and added a twist in the end which will leave the viewers surprised. Even if one keeps the SCAM 1992 comparisons aside, the film has another major hiccup. It moves too fast. Some developments are never explained properly. For instance, one gets a hint that Hemant’s father was upset with him and had even kicked him out of the house. But what exactly happened is never explained in the film. Then, Hemant starting his own consultancy, named Mile High, happens all of a sudden, leaving viewers bewildered. The character of Sanjeev Kohli (Samir Soni) is crucial to the narrative but the writers and director don’t give him the required due.

Abhishek Bachchan: “I’d like to collaborate with Carryminati on…”| The Big Bull | Ajay Devgn

THE BIG BULL has an average opening. The entry scene of Abhishek Bachchan should have been powerful but instead, it’s bland. The film thankfully gets better with the scene where Hemant walks with Priya at night and the former finds out about Viren’s debt. While the rise of Hemant is depicted neatly and quickly, what stand out are the scenes that come just before the end of the first hour. The song ‘Ishq Namazaa’ is very well shot and keeps the interest going. Hemant’s experience at the party in Delhi is intriguing. The scene of the Income Tax Department’s raid and the interview scene of Hemant and Meera run parallel and is the best part about the first hour. In the second half, things get better as Meera attempts to uncover the truth based on the leads that she gets. This is also the time when Hemant gets on shaky ground and tries to his best to get out of the mess. The last 30 minutes is when the film really gets better. The press conference scene is treated dramatically and is bound to arrest attention. The twist in the climax is unexpected.

Abhishek Bachchan gives a commendable performance and he also underplays at several places. He is essaying the part of a flamboyant, egoistic man but he understands that it doesn’t mean he has to go overboard. Interestingly, the actor had done a similar role in the past, in GURU [2007], and the actor ensures that one is not reminded of that performance when they see THE BIG BULL. However, the brief shots of him laughing manically seem unintentionally funny and should have been done away with, ideally. Ileana DCruz hardly gets any scope in the first half but shines in the second half. However, she looks very unconvincing as an old lady in the present-day track. Nikita Dutta is lovely and leaves a huge mark. Sohum Shah is, as expected, dependable and maintains a strong position from start to finish. Mahesh Manjrekar and Samir Soni are decent in their special appearances. Supriya Pathak Shah (Amiben; Hemant and Viren’s mother) is convincing. Saurabh Shukla (Manu Malpani) gets his act right. Ram Kapoor (Ashok Mirchandani) has limited screen time but he rocks the show. Shishir Sharma (Rajesh Mishra; Meera’s boss) is fair while Lekha Prajapati (Tara; Viren’s wife) and Hitesh Rawal get limited scope. The same goes for Sumit Vats (Hari). Kanan Arunachalam (Venkateshwar) is too good especially in the scene where he spills the beans. Tripti Shankhdhar (Ashima; who meets Meera in the train) and Rio Kapadia (NCC MD Singh) register an impact despite being there for just one scene.

Music is average but is well placed. ‘Ishq Namaza’ is soulful and shot beautifully. The title track plays in the background in some important scenes in the first half. ‘Hawaon Mein’ is played during the end credits. Sandeep Shirodkar’s background score adds to the drama.

On the whole, THE BIG BULL gets affected due to the comparisons with SCAM 1992. Yet, it stands out at several places and works due to the performances, the dramatic moments and the unexpected finale.