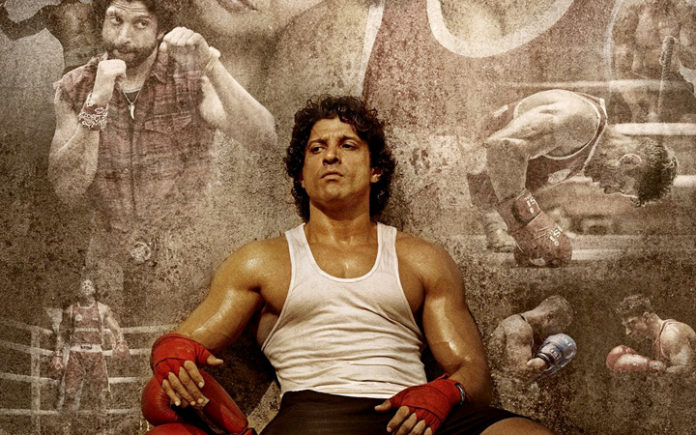 In 2013, actor Farhan Akhtar and director-producer Rakeysh Omprakash Mehra collaborated on BHAAG MILKHA BHAAG. The sports biopic of Milkha Singh got unanimous praise and it resulted in box office collections of Rs. 100 crore plus. 8 years later, both have joined hands once again for yet another sports film, TOOFAAN. This time, Farhan has stepped in as a producer as well, along with his partner Ritesh Sidhwani. So does TOOFAAN manage to be as compelling as their earlier film? Or does it disappoint? Let’s analyse. 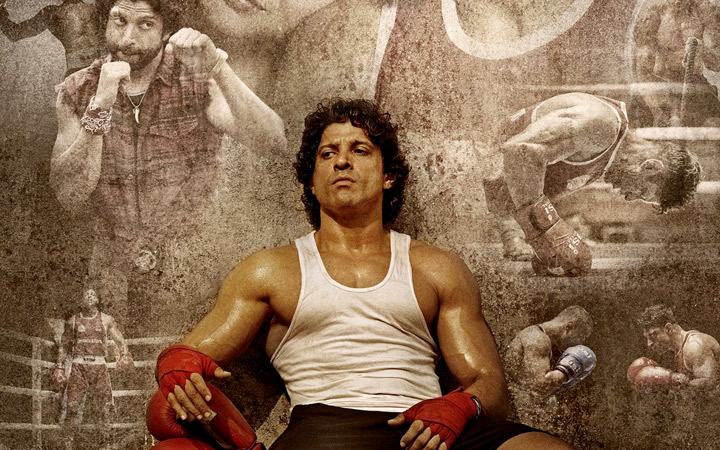 TOOFAAN is the story of a street brawler’s transformation into a top-class boxer. Aziz Ali aka Ajju (Farhan Akhtar) is an orphan who was raised by Jafar Bhai (Vijay Raaz). Aziz now lives with his friend Munna (Hussain Dalal) in Dongri, Mumbai and does all the dirty work for Jafar bhai. While thrashing a restaurant owner (Imran Rashid) over a feud with Jafar bhai, Aziz gets injured. He goes to a charitable hospital for treatment where the doctor, Ananya Prabhu (Mrunal Thakur) ousts him after learning that he’s a goon. A few days later, Ananya witnesses Aziz buying gifts for children in an orphanage. This makes her realize that he’s a good person at heart. One day, Aziz visits a gym in his neighbourhood, run by a man called Merchant (Deven Khote). Merchant trains boxing aspirants in his premises. Aziz witnesses it and gets into a brawl with a player practicing there, Parvez (Arhan Chowdary). Instead of hitting back, Parvez praises him and says that he has a lot of strength. Aziz gets surprised and realizes that boxing can make him a better human. He starts his training. But he still continues working for Jafar bhai. One day, Ananya witnesses Aziz evicting a person from his shop violently. She admonishes him and insists that he should wholly focus on boxing. Aziz realizes she’s right. When Merchant sees a potential in him, he takes Aziz to Nana Prabhu (Paresh Rawal), the best boxing coach in Mumbai. Nana gets Aziz to fight with his student. Aziz gets defeated and he asks Nana to train him. Nana, however, refuses at first due to Aziz’s Muslim identity. Meanwhile, Aziz goes back to the hospital to get treated for the injury sustained in the match. This is when he tells Ananya that he met Nana sir, unknown to the fact that she is Nana’s daughter. Soon, Nana agrees to train him and turns him into a top boxing player. Aziz also gets selected for the state championship where he manages to defeat a seasoned player, Dharmesh Patil (Darshan Kumaar). This is also a time when Aziz starts dating Ananya. After his victory, Aziz is having a drink with Nana when he blurts out that he’s in a relationship with Ananya and that he wants to marry her. Aziz had no idea that she’s Nana’s daughter. Nana, in a fit of rage, slaps Aziz and accuses him of conning his daughter. Nana then forces Ananya to end the relationship and remarks that Aziz is carrying out ‘Love Jihad’. What happens next forms the rest of the film.

Farhan Akhtar’s story idea and Anjum Rajabali’s story is clichéd. The rise, the fall and the rise of a sportsperson has been witnessed in many sports films, from Mithun Chakraborty starrer BOXER [1984] to the more recent SULTAN [2016], and also in Hollywood films. Anjum Rajabali’s screenplay (additional screenplay by Vijay Maurya) is decent but also predictable. You know what is going to happen next in most parts of the film. Thankfully, the writing is peppered with lot of interesting moments. But ideally, the story should have been novel and screenplay should have been gripping. Vijay Maurya’s dialogues are simple and sharp.

Rakeysh Omprakash Mehra’s direction is first-class. The director is back in form, after delivering two forgettable fares in the form of MIRZYA [2016] and MERE PYARE PRIME MINISTER [2019]. He executes a clichéd and ordinary story very well. The sports and training scenes manage to engross. What’s also praiseworthy is that in the middle of the second half, another round of training track is infused when Aziz makes a comeback after a gap. Even these scenes are well shot and don’t look repetitive. TOOFAAN however also has other subplots and raises some pertinent issues of the society. On the flipside, the second half is where the film drops a bit. The tragedy comes in suddenly and some viewers might find it difficult to digest. At 161 minutes, the film is too long and its run time should have been trimmed. Lastly, one expects a lot from this film as it’s made by the BHAAG MILKHA BHAAG director and also stars the same actor. In that regard, TOOFAAN is no match to their earlier film.

“Farhan is the REAL PERFECTIONIST, Aamir Khan comes on No.2”- Farhan REACTS to this comment | Toofaan

TOOFAAN’s first half is fair. The characters of Aziz, Dr. Ananya and Nana Prabhu are well written and presented to the viewers. Also, the fact that Ananya has a connection to both adds a lot of drama to the story. The boxing track is great but the religion angle particularly works big time. The makers have also made a balanced viewpoint and have shown how both communities have elements that have issues with inter-religious romance. Another relatable part of the film is when Aziz and Ananya failing to find a residence of their choice due to their separate religious identities. The second half has a lot of unexpected developments and it takes a while to process. Aziz’s comeback is great but it’s bewildering to see how he manages to make it to the national championship conveniently.

Farhan Akhtar is in a superb form. He looks very convincing as a boxer but even in dramatic and emotional scenes, he rocks big time. After DIL DHADAKNE DO [2016], he wasn’t seen in memorable films and performances. Hence, it’s a pleasure to finally see him in a film where he gets an opportunity to shine. Mrunal Thakur is the surprise of the film. She has a very important part to play in the happenings of the movie and she does total justice with her performance. Also, her hundred watt smile is infectious. Paresh Rawal is terrific and pulls off a challenging role with ease. He’s missing in the beginning of the second half but makes up for it in the pre-climax and climax. Hussain Dalal is lovely as the sidekick and contributes to the film’s humour quotient. Vijay Raaz doesn’t have much to do surprisingly especially since his character seemed unhappy with Aziz’s decision. Darshan Kumaar is great as the baddie. But it seems he’s getting typecast. Dr. Mohan Agashe (Bala Uncle) is adorable and also is the voice of reason and sanity. This makes his character very special. Supriya Pathak (Sister DSouza) is alright. Gauri Phulka (Myra) steals the show as Aziz and Ananya’s daughter. Gaganpreet Sharma (Prithvi Singh) is menacing as the dangerous opponent of Aziz. Deven Khote is confident while Arhan Chowdary, Imran Rashid, RJ Anmol (State championship commentator) and Akashdeep Sabir (Mallik; match fixer) do well. Sonali Kulkarni (Sumati) is there for a scene while director Rakeysh Omprakash Mehra (IBF Secretary) is okay.

Shankar-Ehsaan-Loy’s music is disappointing and this is also one of the weak points of the film. Also, there are as many as 8 songs and on top of that, the album is not memorable. Ideally the movie should have been a song less entertainer. That would have increased the impact. The title track is the best of the lot followed by ‘Star Hai Tu’. Both are well shot. ‘Ananya’, ‘Jo Tum Aa Gaye Ho’ (composed by Samuel and Akansha) and ‘Purvaiya’ fail to register. The rap songs, ‘Dekh Toofaan Aaya Hai’ and ‘Todun Taak’, don’t have recall value. ‘Ganpati Vandana’ is played at an important juncture in the film. Shankar-Ehsaan-Loy and Tubby’s background score is exceptional and would have made a bigger impact on the big screen.

On the whole, TOOFAAN boasts of powerful performances along with some heart-touching and dramatic moments. But the film’s lengthy runtime, poor soundtrack, clichéd plot and the predictable narrative diminishes the impact to a great extent.