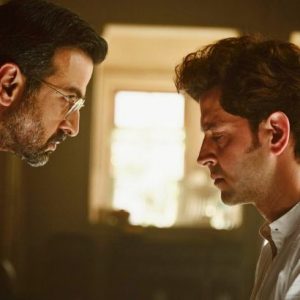 Apparently inspired by a couple of foreign films, this is the story of a two visually impaired but highly independent people, their love story and the evil eye cast upon it, turning it into a revenge saga.

Rohan (Hrithik Roshan) and Supriya (Yami Gautam) are visually impaired but lead as normal as lives are possible. They are introduced through a well wisher and fall for each other swiftly, musically and rather too colourfully! Not very good music either. They are abnormally positive about everything and each other and life. Into this idyllic situation, a villain with a glad eye Amit (Rohit Roy) wrecks havoc.

The couple seek justice but it is denied to them as the twin powers of money and politics come into play. A broken Supriya kills herself and Rohan takes the law into his own hands, openly challenging its upholders. His profession as a dubbing artist helps him carve his way through the criminals and yet managing to remain suspected but uncaught. Weirdly, while their normal life had a fair number of aunties, friends, taais, vahinis etc, not one was present while they struggled their way through their crisis. No one to comfort them but each other in their darkest hour.

In no way is this Hrithik Roshan’s best, though his acting does shine through in a few action sequences. The others are adequate, the exception being Ronit Roy as the bad chap, who does justice to his role.

The plot itself had great promise to turn into a superb thriller, with enough twists to keep one guessing.

Sadly, the inept handling has left it veering from an unrealistically positive and sickeningly pious love story to a cold and menacing trail of violence. The is no suspense left and eventually, we just waited for the hit list to be well…hit so we could exit.