Gurugram: Cop on bike gets hit by speeding car, dies 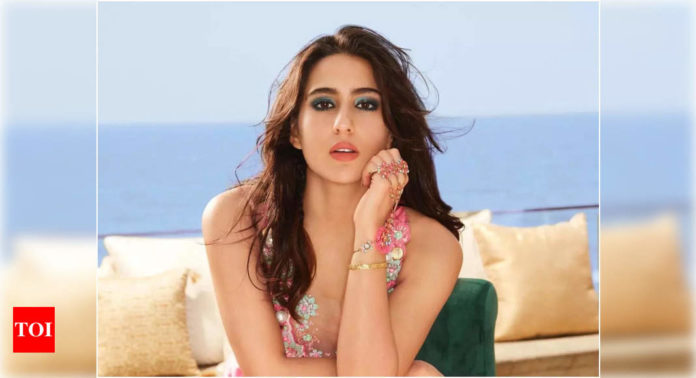 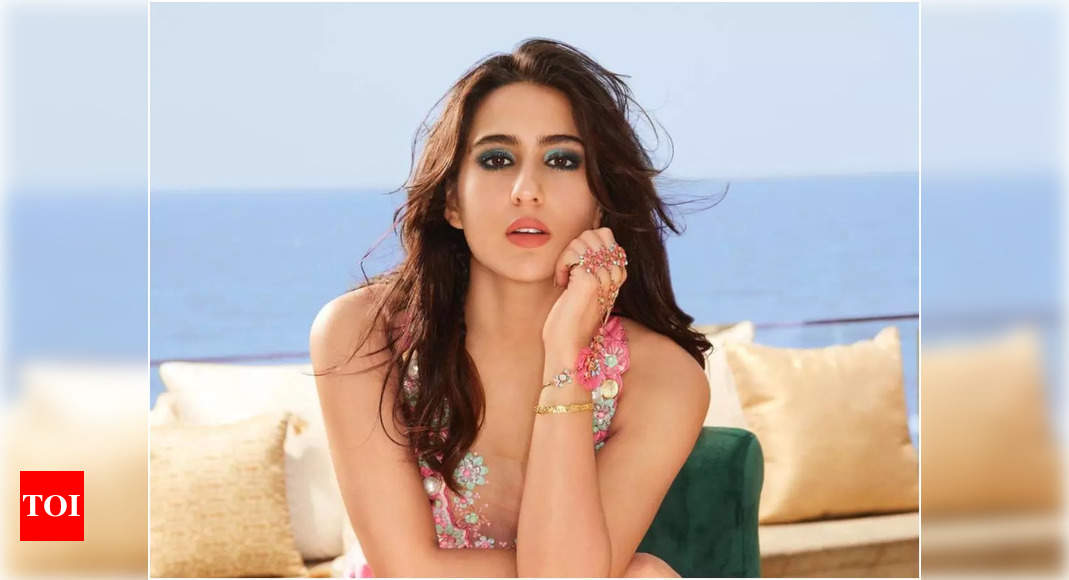 You can’t really put a peg on Sara Ali Khan. She may be the quintessential star kid, but somehow, she’s managed to keep the whole nepotism debate at bay. Having worked with the likes of Ranveer Singh, Sushant Singh Rajput, Akshay Kumar, Kartik Aaryan, and more, she’s found a balance between break-out characters and success. With her latest offering ‘Atrangi Re’ about to release in a few weeks, ETimes caught up with the actress in an exclusive chat about multiple aspects of her life and personality. In this no-holds-barred conversation, Sara talks about marrying a man who’ll move in with her mom, Amrita Singh, and she doesn’t even shy away from recalling her experiences of growing up with a single mother. Read on to find out more…
What was it about your character of Rinku that you found most atrangi?

The fact that Rinku can actually say the line, ‘Ek baar, ek ladki ko agar dono mil jayenge toh?’ The fact that she can mean that and say that in today’s day and age is totally atrangi.

Was that the hook for you as an actor, too?
When Aanandji (L Rai, filmmaker) met me at a film screening and told me that he wants to direct me, honestly, that was all it took. But having heard the script and the world that it’s set in, that’s what made me truly hungry to do this film.


Did you ever feel that Rinku’s character is all too similar to the stuff you’ve done before?

Hundred per cent no. Firstly, the dialect that the character has is new for me. The fact that I am dancing on my first solo song in this movie is new for me. The fact that I am working with Thailava of the North and the South is new for me. I am playing Aanand L Rai’s heroine… that’s new for me as well. But in this character, the fact that she is so loud and assertive in her external characteristics, but then she has such a soft, naive, and innocent interior as well–that contrast is also totally new to me. Who she is and the world she lives in is totally unlike anything I’ve ever done before. She comes from rural Bihar and throws glass bottles at people. But at the same time, she’s also scared, alone, and doesn’t know what the future holds for her. Firstly she’s forcefully married off to someone and then she goes and dances with complete abandon at another wedding. The prospects of what I got to do in ‘Atrangi Re’ is completely new for me. I’d say it’s bahut hatke (very different) and bahut atrangi (very strange).

Your character claims she’s run away with the man she loves multiple times. Have you ever been a rebel with or without a cause, too?

I can’t even come to an interview without matching my bangles to my outfit with the help of my mother. Till my mom doesn’t tell me, ‘Please add green bangles to your hand because you have a chalak of green in that corner of your dupatta’, I won’t be able to step out for an interview. Meri aukaat nahi hai, mummy se door bhagne ki. Kahin bhi bhaag jao, ghar toh wahin jaana hai, roz (I am not capable of running away from my mother. Wherever I run away to, she is the home I have to return to, every day).

Have you ever felt the urge to break the shackles and do something on your own?

Not at all. I’ll even get married to someone who can move in and live with my mom. I’m never going to leave her. Jokes apart, my mother is a very liberal woman. She is my third eye in everyday life. She is the sound of reason, so, no, I’m never running away.

Rinku, your character in ‘Atrangi Re’, drinking soda from the bottle, has become a bit of a selling point. Does it become easy to pitch a character with a gimmick?

For Aanandji and I, the idea was never to sell the character, it was always about feeling for her and the only way the audience will be able to do it is if we, the ones who are bringing her to life, feel for her as well. Aanandji always loved Rinku a lot and I, too, fell in love with her during my process of playing her. Aanandji is much more experienced and outstanding; I am very new, but as an actor and filmmaker we have a common USP and that is our simplicity.

We are not technically sound people. We don’t think like, “Yeh shot aise lagayenge, ye shot aise lenge. Ye expression main aise de dungi, ye close up ko main fod dungi. Humara woh soch hi nahi hai (This is how the shot will be place and executed. This is how I’ll convey my feeling, I’ll kill it in this closeup shot). It’s a simple fact that we rely on our honesty, conviction, and emotion. That’s common to both Aanandji and me. So if you leave the screening or viewing of ‘Atrangi Re’, feeling for Rinku, then that’s more important than that action of breaking or drinking from the soda bottle.

When you work with instincts, impulses, or that feeling from the heart, do you leave a lot of room for mistakes to happen?

But that also gives you a lot more scope for things to go right as well. And that’s the only way I know how to operate. That’s the kid of person that I am. That’s also the kind of actor I am. I am not formally trained. The only thing I have to rely on is conviction and honesty. That’s what I like to do.

What’s the deal with your knock-knock jokes and troubling your brother Ibrahim on social media posts?

It’s just spontaneous fun that I have with him. It’s my excitement that I should get him when he least expects it. When I am looking oily and puffy and I feel he’s not going to post it, I quickly take it and post it for him. I catch him by surprise.

Who do you fall back on for advice? Your mother Amrita Singh or father Saif Ali Khan?

It’s always my mom. For anything and everything.

Despite being a star kid yourself, you’ve been largely relieved from the nepotism critique. Are you happy that you’ve managed to dodge a bullet?

It’s not about dodging the bullet. It’s ultimately the fact that your work speaks for itself. I was given love after ‘Kedarnath’, regardless of the fact that I was a star kid. I was given no love after ‘Love Aaj Kal’ despite the love that I was given in ‘Kedarnath’. Nothing really affects the other. Every Friday is a new day and you are judged for who you are and what your mettle is. That’s something I’ve learnt early in my life. I may have got ‘Kedarnath’ because I was a star kid and I had expectations from ‘Love Aaj Kal’ because of ‘Kedarnath’, but what you saw in both films was me. The love and hate that I got was also me. Regardless of anything, we are here to work and that will speak for itself.

Do you feel you are wise beyond your years?

Perhaps it’s the experiences that I had growing up. I grew up fast and saw a lot in life. Perhaps they helped me grow up a little faster.

Would you peg that on your relationships or other general experiences?

I think it was about living with my mom. Living with a single mother in today’s day and age makes you a little tougher and harder than you need to be. You don’t live in a La La Land for too long then. You see the world for what it is.

Recently a video showed you apologising to the paparazzi after a scuffle with your security. Where does that sense of tehzeeb come from?

I don’t even see it as tehzeeb, I just see it as basic decency. If I see a paparazzo working hard, doing his job, got pushed by somebody, even if the security guy was also just doing their job, I should just say sorry to the photographer. Because it happened with someone who wasn’t even my security. He was assigned by someone else and he’s never worked with me, so, he doesn’t know that I don’t appreciate when someone is pushed. And it’s okay na, one should apologise and say sorry when another person has fallen down.

What do you feel about your co-stars Akshay Kumar and Dhanush?

Akshay sir has a contagious energy and it just electrified the entire set. Dhanush is an institution in acting and being in front of him and being in his company on set was like a lesson in acting.
When you’re working with Aanand L Rai, Himanshu Sharma, Akshay Kumar, Dhanush, what dominates your feelings–nervousness, anxiousness, excitement?

Filmmaking is a very collaborative process. The greater the talent that works on the film, the greater it amplifies the prospects of the movie. That’s the only way of looking at it because I can anyway not be in any competition with Dhanush. He’s the Dhanush, the Thailava, you just go there, do your bit, and have fun.
Credit Source – https://timesofindia.indiatimes.com/entertainment/hindi/bollywood/news/sara-ali-khan-i-will-get-married-to-someone-who-can-live-with-my-mom-first-exclusive/articleshow/88052857.cms