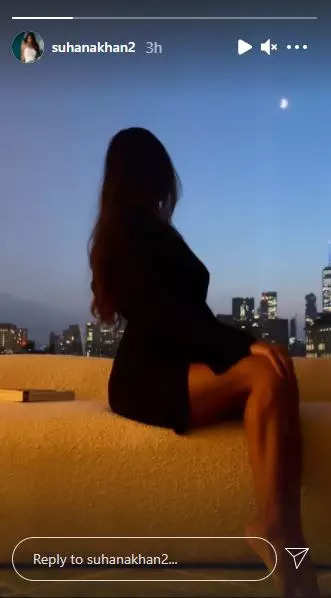 Shah Rukh Khan and Gauri Khan’s daughter Suhana Khan is an internet sensation. Every time she drops a picture on social media, it goes viral on the internet in no time. The star kid is currently in New York and she keeps sharing updates on Instagram.
On Saturday, Suhana took to her Instagram stories and shared a beautiful picture of herself while enjoying moon gazing at her apartment. In the picture, she can be seen sitting on a couch. Sporting a little black dress, Suhana has left her hair open. She can be seen enjoying New York’s skyline. She shared the picture without any caption. Have a look:

Suhana enjoys a massive fan following on social media. Recently, she posted a picture on her handle where she was seen lying on the couch while enjoying a lazy day at her apartment. She was seen sporting a black crop top and loose pants.

Meanwhile, SRK’s daughter is currently studying filmmaking at New York University. She is all set to follow her father’s footsteps as she wants to make her career in acting. She will be doing films once she completes her studies. SRK had once revealed that his son Aryan is interested in directing films and not acting.
Fans are eagerly waiting to watch Suhana on the big screen. She showcased her acting skills in a short film titled, ‘The Grey Part of Blue’. It was her college’s project and fans got to see a glimpse of it. Her pictures from the short film left everyone mighty impressed.
Credit Source – https://timesofindia.indiatimes.com/entertainment/hindi/bollywood/news/shah-rukh-khans-daughter-suhana-khan-enjoys-moon-gazing-from-her-lavish-apartment-in-new-york-picture-inside/articleshow/86133227.cms