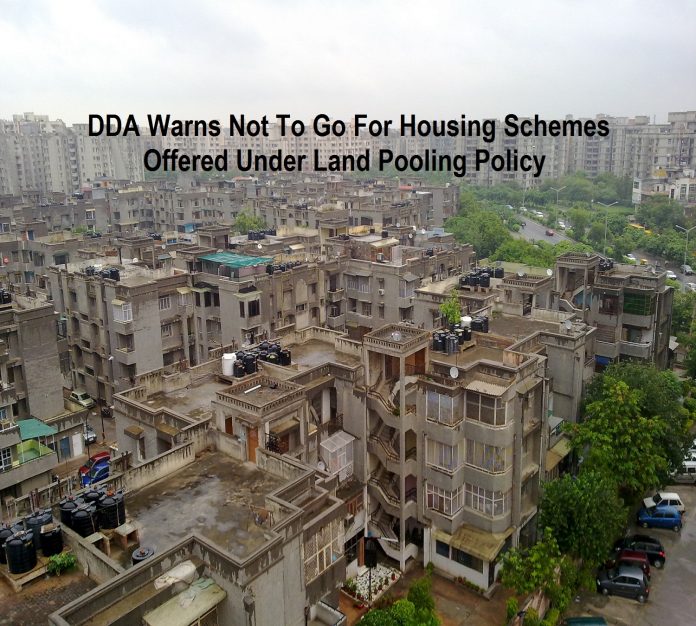 DDA Warns Not To Go For Housing Schemes Offered Under Land Pooling Policy DDA Warns Not To Go For Housing Schemes Offered Under Land Pooling PolicyAre you feeling tempted by offers of affordable flats or plots in the capital under the land pooling policy of Delhi Development Authority (DDA)? The policy was recently notified by the Centre but DDA is warning people not to go for housing schemes being offered under the garb of the policy yet.This is not the stage to start investing in property on the basis of the land pooling policy, warned DDA’s vice-chairman. It is too premature to start investing and someone might land up at a location with no value.The policy might have been notified but DDA is yet to prepare zonal plans for areas that will be developed under the policy or the mechanism through which land aggregators or developers can apply under the policy. There are several things that need to be done, such as working out the regulations, he said. We have to develop a single-window portal where people who are going to aggregate land and want to develop can apply. We have to develop that portal first.Read Also: Housing Prices Rose By 5.3% During April-June In Ten Major Cities: RBIHe said details of the policy have to be spelt out apart from drawing up zonal plans for areas where land pooling would be applicable. The main master plan and zonal plans have to be developed by DDA. And in the zonal plans, sectors have to be planned along with the road network.So, at present, no one can sell or do anything as part of the land pooling policy. It will be difficult for anyone to decide where exactly they want to buy a property and if it would be in an area developed according to the policy.The policy was recently notified by the Union housing and urban affairs ministry and will be applicable in the ‘urbanisable’ areas of urban extensions in 95 villages in the capital.Read Also: Chennai Saw Overall Rise Of 15% New Supply Of Residential Homes: AnarockIn a bid to alert and warn gullible buyers, DDA has initiated a communication programme under which it has clarified that the policy is yet to become operational through advertisements and social media.A senior DDA official said, we are also aware that many such unscrupulous promoters have opened kiosks in areas like Dwarka and localities neighbouring Gurugram, where they distribute pamphlets and brochures promoting housing schemes. Also, bulk messages are being sent by such promoters on cellphones. In fact, many officials of DDA have received such messages.Source Link- https://timesofindia.indiatimes.com/

MHADA Will Announce Lottery For 1,194 Houses In Mumbai Before Diwali

Maharashtra Housing Development Corp To Be Set Up For Affordable Housing