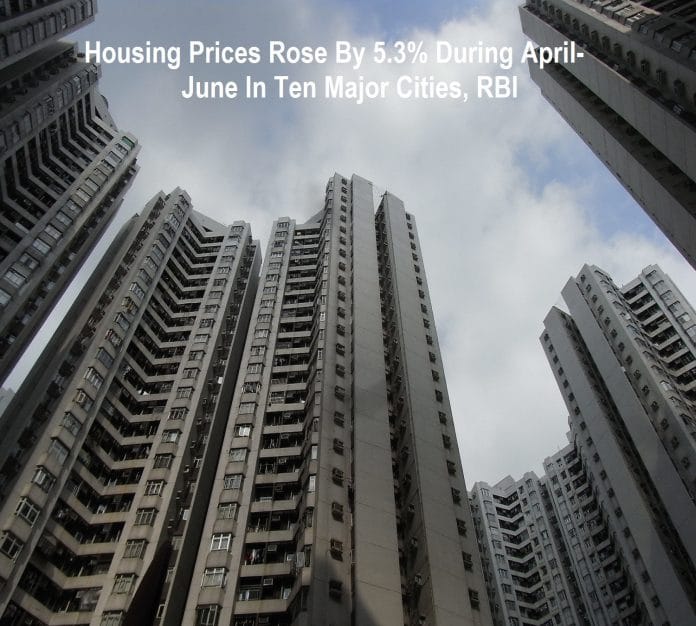 Housing Prices Rose By 5.3% During April-June In Ten Major Cities: RBI Housing Prices Rose By 5.3% During April-June In Ten Major Cities: RBIHousing prices rose by an average 5.3 per cent during the April-June quarter of this fiscal in ten major cities as compared to the year-ago period, according to RBI data.The average rates appreciated by 2.5 per cent in these 10 major cities when compared to the previous quarter.Read Also: Maharashtra Sanctioned Rs 120 Crore For Affordable Housing Project In SolapurThe Reserve Bank of India (RBI) released the quarterly house price index (HPI) for the first quarter of 2018-19, based on transactions data received from housing registration authorities in ten major cities Mumbai, Delhi, Chennai, Kolkata, Bengaluru, Lucknow, Ahmedabad, Jaipur, Kanpur and Kochi.On a year-on-year basis, the all-India HPI recorded a growth of 5.3 per cent in Q1:2018-19 as against 6.7 per cent in the previous quarter and 8.7 per cent a year ago, RBI said in a statement.Except for Delhi, all other cities recorded a rise in housing price on an annual basis, it added.Read Also: Kolkata Topped In Launching New Houses Among Major Seven CitiesThe All-India HPI recorded a sequential increase of 2.5 per cent in Q1:2018-19 over Q4:2017-18, RBI said. Delhi recorded the highest rise of 5.3 per cent and Kanpur recording the maximum contraction of (-) 2.4 per cent.Source Link- https://economictimes.indiatimes.com/

California To House Homeless In Cruise Ships: ‘This Is An Emergency’ – Oakland Housing Issue