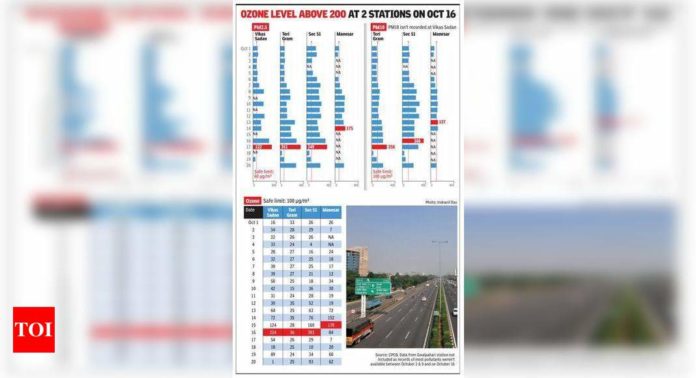 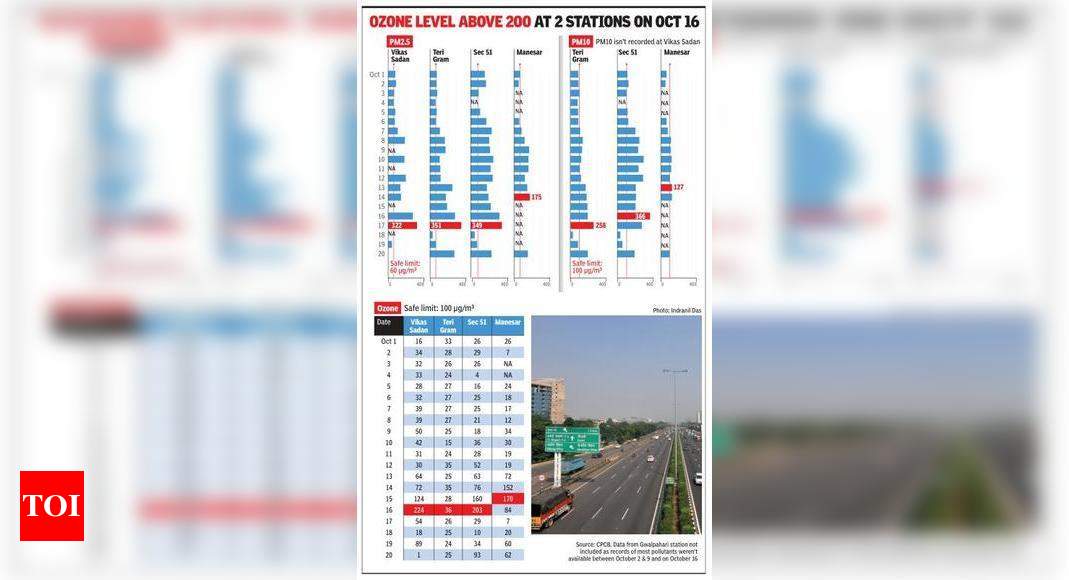 Gurgaon: In less than 48 hours, the city’s air quality has nosedived to the “poor” category from “good” due to a combination of local emissions, meteorological factors and a high volume of particulate matter (PM). While fall in wind speed, from Tuesday’s 11 km/hour to 6 km/hour today, and dip in temperature slowed down dispersion, experts say lack of effective clampdown on industrial emissions and vehicle exhaust gasses has further led to an accumulation of pollutants.
On Wednesday, the city’s Air Quality Index hovered at around 235 (poor) on a scale of 500, down from 81 (satisfactory) and 36 (good) recorded on October 19 and 18, respectively, according to the Central Pollution Control Board (CPCB).
An analysis of data obtained from the city’s five air monitoring stations revealed that apart from PM 2.5 and PM 10, which are the most prominent contributors of pollution, there was a high presence of toxic pollutants like ozone, carbon monoxide (C0), nitrogen dioxide (NO2) and sulphur oxide (SOx). Between October 1 and 20, three of five stations had unsafe levels of ozone.
On October 15 and 16, the concentration of ozone touched 124 ug/m3 and 224ug/m3, respectively, at Vikas Sadan — the highest concentration recorded in the city this month so far, as per CPCB data. The Sector-51 station, meanwhile, recorded 160 ug/m3 and 203ug/m3 of ozone in the corresponding period, while at Manesar centre it touched 152ug/m3 and 170ug/m3 respectively on October 14 and 15.
Experts have called the trend “alarming” as the prevalence of ground-level ozone indicates other pollutants, such as nitrogen oxide (NOx) and SOx, are also present in higher quantities.
According to Aarti Khosla, director of Climate Trends, a climate research agency, a high presence of ozone in Gurgaon could be mainly linked with emissions from tailpipes. “A lot of ozone pollution is caused due to vehicular emissions. Breathing the gas has a documented impact on lung health causing short-term breathing problems as well as dangerous conditions, like chronic obstructive pulmonary disease due to long term exposure,” Khosla told TOI.
Devising a traffic plan that moves people and not vehicles, allowing space for public transportation to build up, she said, were some long-term measures that could be adopted to bring ozone level down in a city like Gurgaon.
“But let us not forget that ozone also comes from industrial sources like factories, chemical plants, power plants. Unless industrial emissions are not checked, it’s hard to get rid of ozone. The gas can travel long distances as well so all ozone present in an area might not have been generated there, thereby compounding the effect of ozone,” Khosla added.
Currently, 266 industrial units are operational in Gurgaon. The sprawling city has nearly 1.1 million vehicles while more than 50,000 vehicles enter the city every day, according to the Regional Transport Office.
According to experts, the concentration of ozone is directly proportional to NOx. “The chemical reacts with volatile organic compounds in the presence of sunlight to form ozone. So, the more the NOx, the more is the production of ozone. The major sources of CO2 and NOx are almost the same — vehicular and industrial emissions,” Shubhansh Tiwari, a research associate at Amity Centre for Air Pollution Control, said.
On October 12, the Vikas Sadan centre recorded NO2 at 110µg/m3, while it was at 125µg/m3 on October 17. The permissible standard for both NO2 and sulphur dioxide (SO2) is 80.00µg/m3.
Garbage burning, experts said, was a dominant factor contributing to SO2, besides PM2.5 and PM10 concentrations. Besides, rampant use of diesel generators across housing societies, hospitals, malls, hotels, offices and industrial units, also significantly add to PM and NOx emissions. Road dust and dust from construction sites, too, spike PM2.5 concentrations.
“Existing estimates on sources affecting Gurgaon’s air quality indicate that vehicles, industries, dust and stubble burning are the leading sources of winter PM 2.5 levels in the city. With wind expected to predominantly blow from the northwest direction of NCR on October 20 and 21, stubble burning in neighbouring states, in addition to emissions from local sources, is likely to deteriorate air quality in the city. The state government should roll out pre-emptive measures to target deeper emission cuts,” Tanushree Ganguly, programme lead at Council on Energy, Environment and Water (CEEW), told TOI.
The Centre for Science and Environment (CSE), meanwhile, recommended the government should take active steps to curb vehicular emissions, increase electric mobility, scale up public transport and pedestrian infrastructure, deploy citywide parking management to curb the use of private vehicles, and aggressively control industrial emissions. Anumita Roychowdhury, executive director (research and advocacy), CSE, said, “Implementation of these norms can only reduce pollution levels in the air. Though there are several factors that contribute to the pollution of air quality, dust from construction sites in the region is a major contributor.”
Meanwhile, CPCB has implemented Graded Response Action Plan (GRAP) measures under the “moderate” to “poor” range with immediate effect in National Capital Region (NCR) from October 18. On Wednesday, Haryana State Pollution Control Board (HSPCB) officials said that they were taking all required action to mitigate air pollution. “Our staff is vigilant of local pollution such as road dust, dust from construction sites and garbage burning instances,” Sandeep Singh, HSPCB regional officer, said.
Credit Source – https://timesofindia.indiatimes.com/city/gurgaon/aqi-poor-again-after-good-break-spiking-ozone-levels-a-worry-too/articleshow/87171244.cms