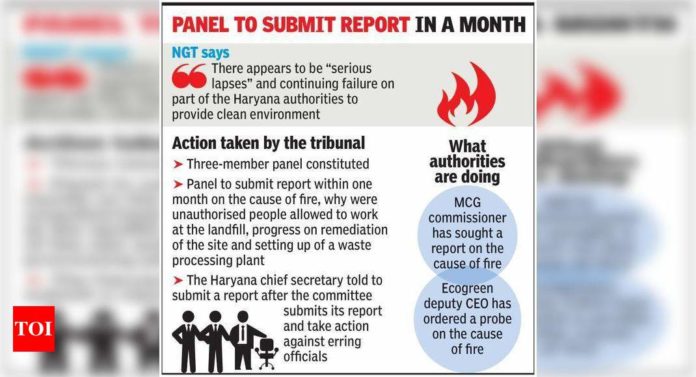 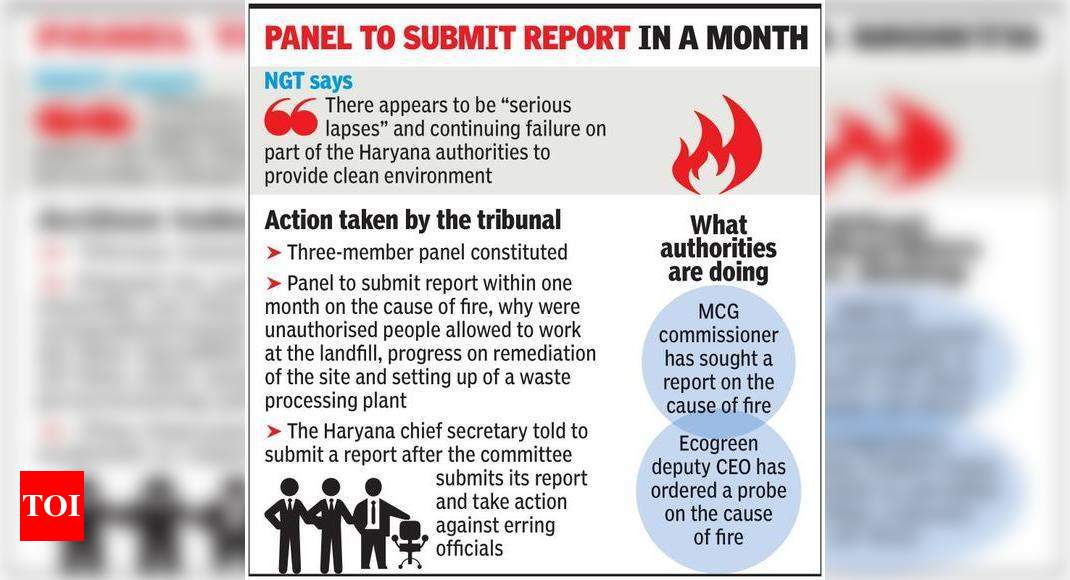 Gurgaon: There appear to be “serious lapses” and continuing failure on the part of the Haryana authorities to provide a clean environment and uphold the rule of law, the National Green Tribunal (NGT) has said days after the Bandhwari landfill site caught fire.
These remarks were made by a bench headed by NGT chairperson Justice Adarsh Kumar Goel while hearing a plea alleging failure to maintain environmental norms in handling the Bandhwari landfill site on Monday. The tribunal also constituted a three-member committee to submit a report within a month on the causes of fire, reasons for unauthorised persons working at the landfill site, progress on remediation of the site and setting up of the waste processing plant.
The committee comprises an official each from the Central Pollution Control Board and Haryana State Pollution Control Board and Gurgaon’s district magistrate.
“We are of the view that effective remedial measures, including an effective monitoring mechanism, is required in view of the seriousness of the situation. A state can hardly be oblivious to its constitutional obligation to the citizens for protection of public health, particularly when failure to prevent outbreak of diseases results in mass destruction of human lives. No enemy is needed. Failure of the administration and neglect of responsibility is enough for destruction,” the bench said.
Moreover, the tribunal has also said the errant officers have to be made accountable for the continuous failure in handling the landfill site. After the three-member panel submits its report, the Haryana chief secretary will have to respond about the remedial action taken and steps taken against the errant officers within a month.
After the landfill caught fire on July 11, MCG commissioner Mukesh Kumar Ahuja had directed the officials concerned to submit a report on the causes of fire. “I have not received the report yet. I will be able to decide the further course of action after receiving the report,” he said.
Sanjay Sharma, deputy CEO of Ecogreen, the concessionaire of solid waste management in Gurgaon, said: “We have already initiated an inquiry to investigate the cause of fire at the landfill site. As soon as the report is filed, we will submit it to MCG. The corporation is also conducting an inquiry at its level.”
According to petitioner Poonam Yadav, waste is being burnt at Bandhwari, causing air pollution. It has the potential to affect not only locals but also the flora and fauna at Asola Bhatti Wildlife Sanctuary, the plea says.
Credit Source – https://timesofindia.indiatimes.com/city/gurgaon/bandhwari-landfill-fire-serious-lapses-by-haryana-government-says-ngt/articleshow/84624207.cms

Volunteers of PEACE Program spent a day at an old age...