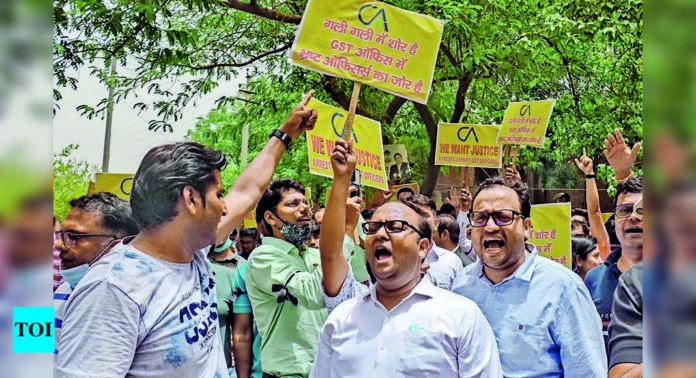 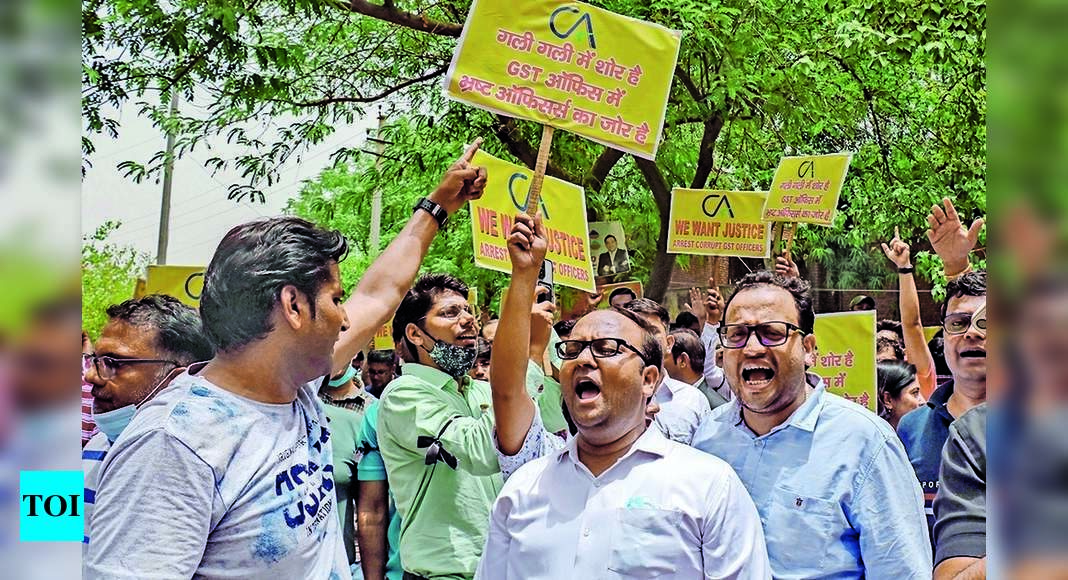 Gurgaon: Scores of CAs who are members of the Institute of Chartered Accountant of India (ICAI) protested on the streets on Saturday against what they alleged is the wrongful arrest of two of their compatriots in an alleged GST input tax credit (ITC) fraud amounting to several crores.
ICAI alleged the two CAs were victimised and sought police action against senior tax officials who, it claimed, were the main perpetrators of the fraud. The association has also reached out to chief minister Manohar Lal Khattar and Union finance minister Nirmala Sitharaman for a CBI probe into the fraud. Gurgaon-based CAs Sunil Mahalawat and Gaurav Dhir were arrested on Wednesday and are in judicial custody at present.
The case is related to claims of input tax credit (ITC), purportedly made by fake companies. ITC is the tax that has already been paid at the time an item has been purchased. The amount is deducted from total payable tax and refunded.
ICAI has alleged that ITC claims amounting to around Rs 15 crore were approved within hours of application, while it usually takes months to clear claims of a few lakhs.
Members of the association took out a protest march from the Central GST office in Sector 32 to the district court on Saturday.
The protesters alleged that the beneficiary companies which received the ITC fraudulently and the CGST officials who approved the claims haven’t been touched and the CAs who issued the claim certificates “were being made scapegoats”.
The scrutiny began after an anonymous complaint was filed with CGST on May 2 about fraudulent ITC claims of around Rs 15 crore. The complainant made serious allegations against senior CGST officials, including the commissioner, and accused them of running a “syndicate” of fraudulent ITC claims, causing huge losses to the government.
On May 4, the CGST anti-evasion wing started a probe over fraudulent refunds to eight entities and searched their premises. According to CGST officials, all the eight entities were found to be non-existent. One of the main beneficiaries of the ITC claims, amounting to around Rs 5.6 crore, was arrested on May 6.
The anti-evasion wing has since extended its investigation to cover 12 more entities believed to be involved in fake ITC claims of approximately Rs 13.1 crore. CAs Mahalawat and Dhir were arrested on May 18 for issuing certificates to two of the entities for ITC refunds amounting to crores under Section 132 (punishment for falsifying records or abetment to fraud) of the CGST Act.
Dhir’s brother Saurabh told TOI the CA was at home when he received a call for a meeting with CGST officials. “They took him into custody and also took away his mobile phone. The next day, we came to know that he was kept at the CGST office. Gaurav told us that he is being framed,” said Saurabh. Dhir completed his CA two years AGO and started working with a private company a few months ago.
Naveen Garg, the chairman of ICAI’s Northern India Regional Council, who took part in Saturday’s protest, said a certificate issued by a CA is required for an ITC refund. “On the basis of the available documents, a CA issues the certificate, but it is not the only basis for refunds. The department has an elaborate process involving physical verification and scrutiny before approval of the claim,” Garg said. In this case, CGST officials arrested the CAs but no action has been taken against the beneficiary company and the officials who approved the claims, he added.
When someone applies for refund, it is the responsibility of CGST to verify the application to check whether the ITC claim is genuine or not, said Mohit Singhal, chairman of the Gurgaon chapter of ICAI. “CGST also conducts physical verification of the premises to find out whether the company is real or fake. In this case, the refund was sanctioned within a few hours of the application being submitted,” he added.
“We demand a CBI inquiry,” former ICAI (Gurgaon) chairman Nitin Kataria said. “The CGST department is making CAs the scapegoats in this case. Refund claims are applied through the GST portal and claims are filed by the company owner through OTPs or digital signatures. CAs have a very limited role,” he added.
Asked what steps the ICAI takes to ensure CAs affiliated with it are clean, Garg said the association has a five-member disciplinary committee with members nominated by the government and two from the association. “If a CA is found guilty of fraud, they can be suspended, or their membership terminated. We can also take legal action against the CA,” Garg said, adding that in the past, several CAs have been suspended. “In this case as well, the panel will take up the case and take action if they are found guilty.”
The CGST department claimed action was taken against the CAs according to law. Commissioner Meenu Kumar termed allegations against her “baseless”. “The CAs in question have made a confessional statement about issuing the certificates. A deep investigation is under way to find out the truth,” Kumar said, adding the beneficiaries were fictitious companies and they suspect the arrested CAs were behind the creation of these firms. “They are not giving details of the fictitious companies, which is why they are in judicial custody. The department wants to get details of the fake firms,” she said.
The commission added that CGST officials who sanctioned these refunds have been transferred and a detailed enquiry is being undertaken by the office of the chief commissioner, Panchkula.
Credit Source – https://timesofindia.indiatimes.com/city/gurgaon/claims-okd-by-tax-officials-icai-protests-arrest-of-2-cas/articleshow/91715988.cms