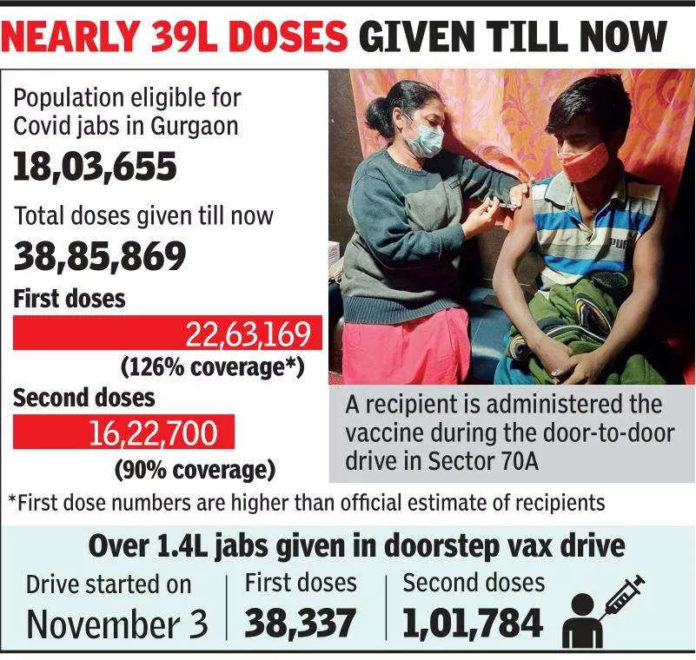 GURUGRAM: The city can look at its vaccination coverage with some reassurance as firewalls go up to check the Omicron variant of SARS-CoV2. The month-long doorstep vaccination campaign — ‘Har Ghar Dastak’ — has added 1.4 lakh recipients to inoculation numbers since it was launched on November 3, taking the city’s second-dose coverage past the 90% mark.
Vaccine coverage is calculated on the basis of an official target estimate that is based on population projections. It’s a ballpark number that keeps getting revised. For Gurugram, it is currently 18.03 lakh. However, going by the number of first doses given in the city — 22.6 lakh so far — the aggressive push to increase second-dose coverage will have to continue. 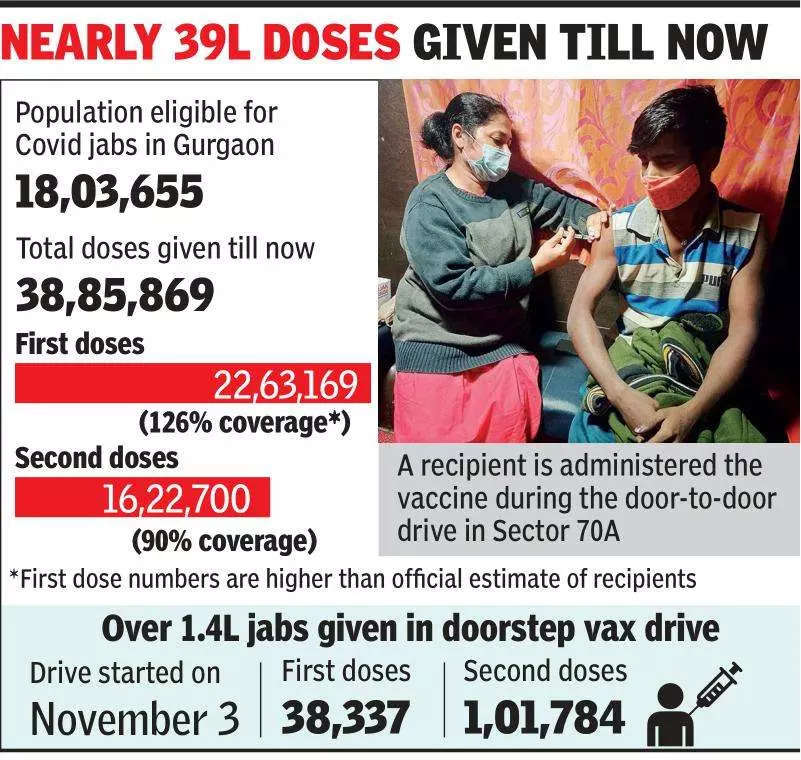 Of the 1.4 lakh recipients covered in the doorstep campaign in November, 1.01 lakh received second doses and 38,337 first doses. Overall, the number of fully vaccinated individuals in the city is 16.22 lakh at present. Two mega vaccination drives have been planned in the coming days.
A total of 16 industries, malls, hospitals and offices in the city have, meanwhile, officially achieved 100% vaccination status as all their employees have been inoculated, according to the health department.
Union health minister Mansukh Mandaviya had on October 27 announced the doorstep campaign for door-to-door vaccination to motivate people to get the jab. The health department has decided to carry on with the campaign this month.
“We will continue our house-to-house drive as there is a possibility that there are women in rural areas, many of whom don’t step out of their homes, as well as the elderly and ill haven’t got their first doses yet. The drive will continue to cover all such people. The focus will be on second doses as Gurugram has given 126% first doses and 90% second doses,” Gurugram chief medical officer Virender Yadav told TOI.
“Our teams are carrying out evening as well as early morning sessions for people who are not available during the day,” he added. Dr Yadav said that 14 morning and four evening sessions were organised in the past week. In the morning sessions, 1,072 people were given jabs, while in the evening sessions, 408 people were vaccinated. Health officials said they are also updating the vaccination status of recipients who have received their second doses using a different identity card or mobile number on the Co-WIN portal. The department stressed that the number of Covid cases might rise in the city with increased movement and a laxity in adherence to protocols like wearing masks.
Credit Source – https://timesofindia.indiatimes.com/city/gurgaon/coverage-of-vax-second-dose-hits-90-in-gurgaon/articleshow/88038760.cms

Riddled with craters & no repairs for 1 year: Travel a nightmare on Dwarka Expressway link