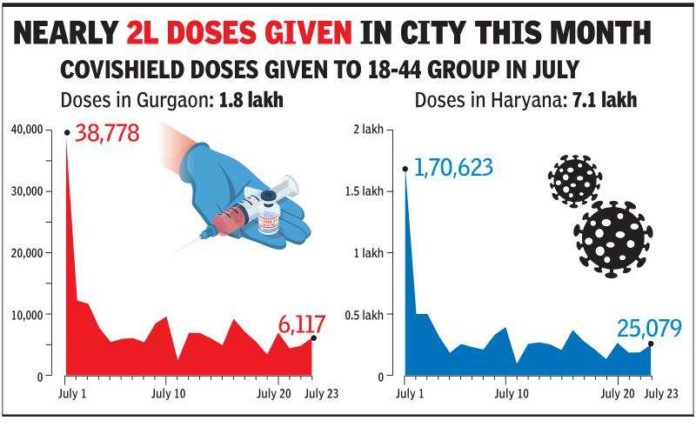 GURUGRAM: If the current vaccination pace is to be maintained in Haryana, Covishield supply to vaccination sites will need a significant booster shot soon because the second dose cycle for the 18-44 population begins next week. Vaccinations for the 18-44 group began on May 1 — Covishield has a minimum 84-day window between two doses.
So far, 92.1 lakh total doses of Covishield have been administered in Haryana. Out of these, 76 lakh (82.6%) are first doses and 16 lakh (17.4%) are second doses. Haryana at present has around 37,000 doses of Covishield and 58,500 Covaxin. With vaccine supply limited, it remains to be seen if Haryana will reserve Covishield shots only for second doses. 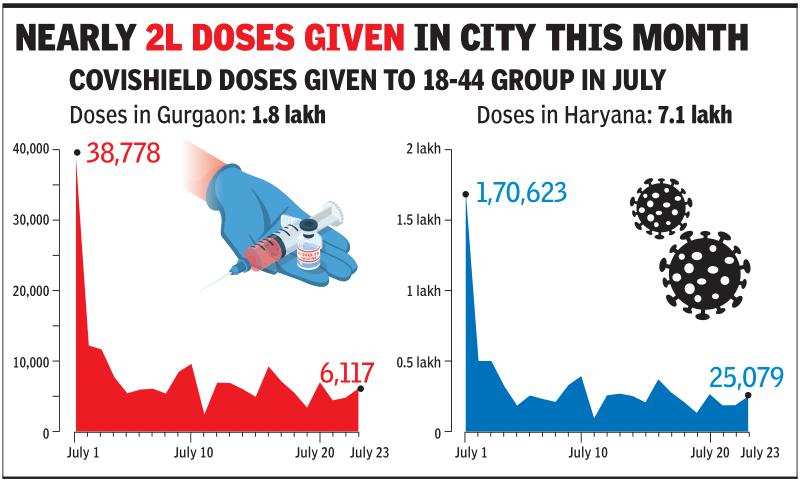 In the first 15 days of May, over 4 lakh people in the 18-44 age group got Covishield jabs in Haryana, out of which 53,649 were in Gurugram. These people will now be due for their second dose. The state has given over 7.1 lakh Covishield jabs in July so far — an average of nearly 30,000 doses each day. Gurugram , meanwhile, has administered more than 1.8 lakh doses in this period, which means around 7,760 doses per day on an average.
Based on the 2011 Census, the state’s total projected population is 2.9 crore. As many as 1 crore doses of the Covid vaccines (Covishield, Covaxin and Sputnik V) have been administered till now. While 87.5 lakh have received first doses, a little over 21 lakh have been fully vaccinated with both doses. As many as 49.8 lakh doses have been given to the 18-44 population.
According to health department data, 16.5 lakh people in the state have received Covaxin (11.1 lakh first doses and 5.4 lakh second doses). A total of 24,621 people have got their first doses of Sputnik and 2,196 their second doses in Haryana. Unsurprisingly, Covaxin’s second dose coverage (32.7%) is higher than Covishield’s (17%) as the gap between the two doses is less.
Gurugram has administered over 17 lakh doses so far, accounting for nearly 16% of the state’s total vaccinations. This includes over 14.4 lakh doses of Covishield (11.7 lakh first doses and 2.7 lakh second doses) and 2.5 lakh Covaxin (1.5 lakh first doses and 96,676 second doses). Moreover, a total of 12,417 people have been inoculated with the first doses of Sputnik V, while 788 people got second doses. Thus, over 21% of Gurugram’s projected population of nearly 17.5 lakh has been fully vaccinated, while 97.6% have received at least one dose.
Asked if Haryana will give only Covishield second doses to inoculate the maximum recipients who will be due for their second dose after July 24, Haryana additional chief secretary (health) Rajeev Arora said, “We have dedicated vaccination sites across Haryana for second-dose recipients. We do not have any plans to restrict Covishield to second dose recipients as first dose recipients are equally important. We cannot put first doses on hold as we aim to vaccinate the maximum number of people as soon as possible. It will not be fair to those coming for their first jabs.”
TOI also asked state immunisation officer Virender Ahlawat how Haryana plans to manage steady vaccinations with the limited supply of doses at present. “Supply will be streamlined and eased within two-three days. We are about to get 2.5 lakh doses of Covidshield within two days and we will distribute them to districts soon,” he said.
Credit Source – https://timesofindia.indiatimes.com/city/gurgaon/demand-to-spike-as-covishield-enters-2nd-dose-cycle-for-18-44-supply-tight/articleshow/84693015.cms