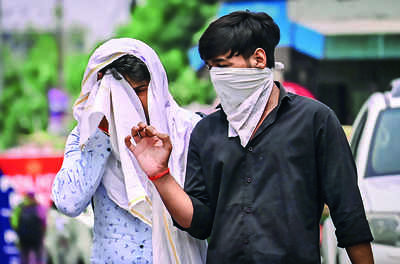 Gurgaon: The wait for rains is set to end, as the city is likely to receive pre-monsoon showers on Wednesday. According to the India Meteorological Department (IMD), which has issued a yellow alert for Gurgaon for Wednesday with light to moderate rainfall, monsoon will hit the city by Thursday or Friday.
This is also expected to bring much-needed relief from the muggy weather, with the maximum temperature likely to dip to 32 degrees Celsius by Thursday. It was 41.7 degrees on Tuesday, four notches above the season’s normal.
An orange alert has also been issued for Thursday with IMD forecasting heavy showers, whereas there is possibility of thundershowers on Friday as well. IMD has advised people to avoid going near water bodies, weak structures and trees and move to safer places during thunderstorms and lightning.
“There is a high moisture content and east-west trough over north India, making it favourable for the advance of monsoon in parts of Haryana during Thursday to Friday. Rainfall activities are expected to pick up pace on Thursday night and Friday, with 20-40mm rainfall likely at many places,” said Manmohan Singh, director of IMD (Chandigarh).
Moderate to heavy rainfall is likely over at isolated places of extreme northern and southern parts of Haryana on Thursday and Friday, he added. “The spell is likely to be accompanied with thunderstorms, lightning and gusty winds of 30-40kmph. Mercury is expected to fall by 4-6 degrees during the next three to four days,” Singh further said.
So far in June, the first month of the monsoon season, Gurgaon has received 26.4mm rainfall as compared to normal of 38.7mm — a rain deficit of 32%.
On Tuesday, the minimum temperature rose by two degrees to 30 degrees Celsius, which was three notches above the season’s normal. The relative humidity index oscillated between 66% and 78% throughout the day. The city’s air quality remained in the ‘moderate’ category on Tuesday at 148, compared to 140 the previous day.
Meanwhlie in Delhi, IMD announced on Tuesday that the southwest monsoon would reach the capital likely on Thursday or Friday. With the monsoon missing its normal onset date of June 27, the capital has been eagerly awaiting rain. Delhi has received just 15.8mm of rainfall in June so far as against the normal of 56.1mm, a rain deficit of 72%. “The monsoon is likely to hit Delhi between June 30 and July 1. It depends on rainfall distribution and rain intensity,” said R K Jenamani, senior scientist, IMD. The met department hadn’t forecast a date for monsoon onset in Delhi earlier to this.
However, the arrival of the rain-bearing monsoon may still be delayed this year. “Three to five days from the normal onset date is not considered a delayed monsoon. However, we can comment on this only after the monsoon hits Delhi,” said Jenamani. According to IMD, the monsoon arrived in Delhi on July 13 in 2021 and on June 25 a year earlier.
Though the met department has predicted rain activity from Wednesday, the day temperature showed no sign of abating on Tuesday. The maximum temperature recorded at Safdarjung, which is the city’s base station, was 41.5 degrees Celsius, four degrees above normal. Before this, the city’s highest maximum temperature for the month was on June 15 with 39.6 degrees Celsius.
The heat index (feel-like temperature when relative humidity is combined with temperature) was 53 degrees Celsius. The relative humidity oscillated between 74% and 45%. “Due to easterly winds, the weather has become humid for the past three days,” explained Jenamani. “However, as the clouds have arrived, rain can be expected in the city from Wednesday.” Jenamani added, “On Tuesday, the maximum temperature recorded in most stations departed by four to six degrees from the normal.”