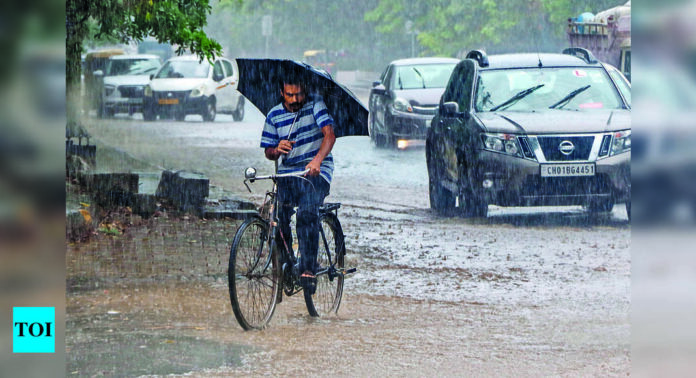 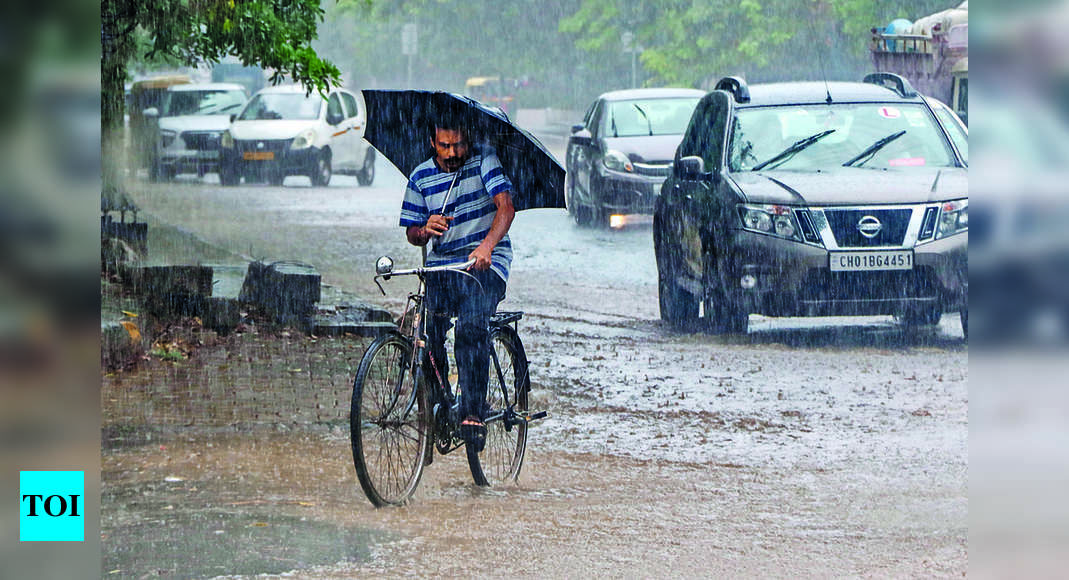 Gurgaon: Rain continued to lash the city on Friday. Till 5.30 pm, the city received 3mm of rainfall. According to the IMD, the intensity of rain is likely to go down from Saturday but the city will receive scattered light rain till June 5.
Scattered intermittent light showers started around 9am and continued till 12 pm covering several parts of the city, while Sohna received moderate rainfall of 31mm during the day, according to the data from district administration.
“Southwest monsoon covered the entire Haryana on Friday. However, the rainfall activity is likely to decrease from Saturday onwards with a possibility of light rainfall at a few places in Gurgaon between July 2 and 5. There is a lot of moisture in the atmosphere and as a result there won’t be any significant change in the temperature for the next 4-5 days and the daytime temperature may range between 30-33 degrees Celsius in the few days,” an IMD official said.
On Friday, the minimum temperature dropped from Thursday’s 24.6 degrees Celsius to 23 degrees Celsius — four notches below the normal. While the maximum temperature rose slightly and was recorded at 30 degrees Celsius, up from 28.5 degrees Celsius recorded on the previous day. But it was still seven notches below the normal. The relative humidity index oscillated between 93% and 94% throughout the day.
The city witnessed a good spell of rain on Thursday, which has reduced the rain deficit of 20% into 31% of surplus rains with a cumulative rainfall of 66.9mm as compared to season’s normal of 51mm.
According to the IMD’s forecast, the skies will remain partly cloudy with a possibility of light rain, while the minimum and maximum temperature is expected to hover around 23 and 30 degrees Celsius, respectively. The city’s air quality remained in the moderate category on Friday. The overall AQI reading was at 147 as compared to 122 on the previous day.
Meanwhile, in Delhi, moderate to very light rainfall was witnessed on Friday, the weather department expects the intensity of rain to drop over the next few days. IMD expects the national capital to see heavy rainfall on July 6. The maximum temperature soared by two degrees Celsius over the past 24 hours. High humidity was experienced in the afternoon, but a cloudy sky and a drizzle brought some respite. The humidity on Friday oscillated between 80% and 98%.
The minimum temperature was 23 degrees Celsius, five notches below normal, against 27.6 degrees a day earlier. The maximum and minimum temperatures on Saturday are expected to hover around 34 and 24 degrees Celsius, respectively, with a possibility of very light rainfall.
Air quality in Delhi improved to the “satisfactory” category on Friday. The air quality index on Friday was 76 against 116 in the “moderate” category a day earlier.
Credit Source – https://timesofindia.indiatimes.com/city/gurgaon/expect-scattered-showers-for-3-days-imd/articleshow/92607387.cms