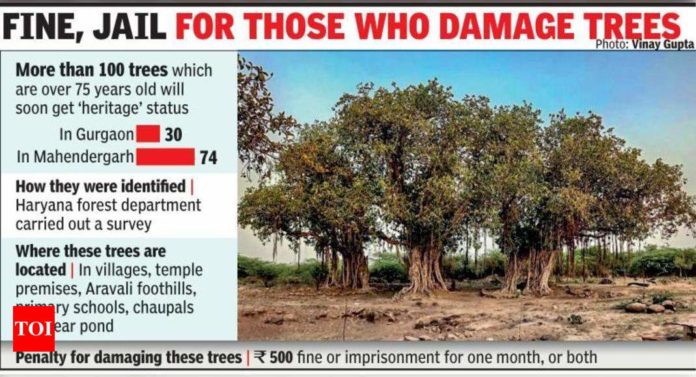 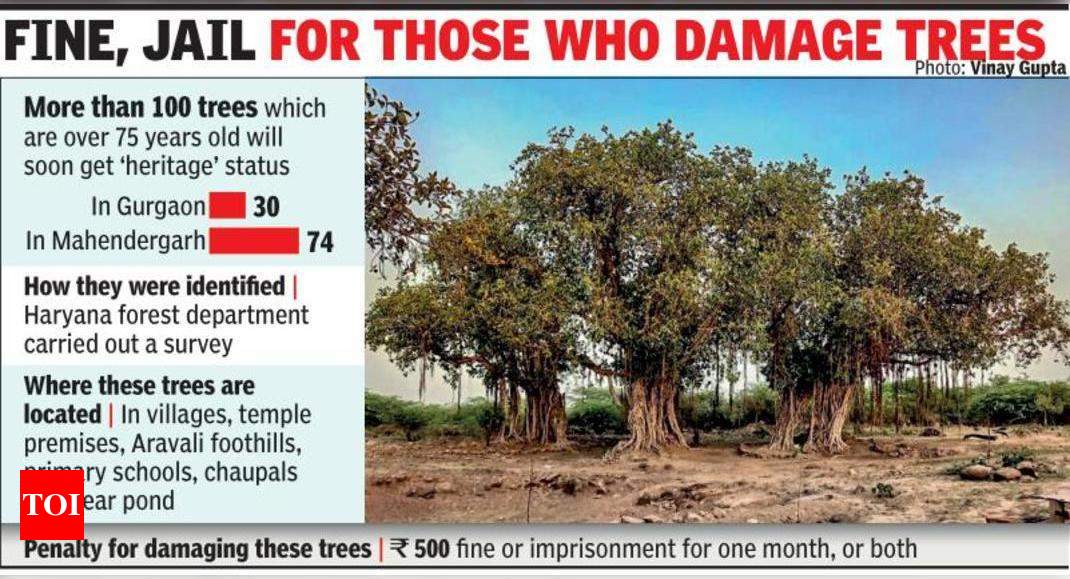 Gurgaon: More than 100 trees that are over 75 years old in two districts of south Haryana will soon get ‘heritage’ status. Thirty of these trees are in Gurgaon while 74 are in Mahendergarh.
This is the first such survey in the state. The forest department is conducting similar surveys in four other south Haryana districts as well.
According to the Heritage Tree Rules, 2021, if any person or organisation cuts, axes or causes any damage to a ‘heritage’ tree, they can be fined up to Rs 500 or face jail up to one month or both. Among the trees that will get tagged are kadamb, indrokh, bargard pipal, neem, jand and imli. Most of these are in villages, temples, Aravali foothills, primary schools, choupals and near ponds.
“As per our survey, the district has 30 old trees. We are taking steps to conserve them,” Rajeev Tajyan, divisional forest officer, Gurgaon.
According to the forest department, there are at least 2,500 trees in the state that have attained the age of 75 years or more. The Haryana government plans to provide a pension of Rs 2,500 per year to the owner of such heritage trees. The scheme would be applicable to those existing on both private and government land, up till the life period of the heritage tree.
Environmentalists welcomed the move, pointing out that in the absence of a Tree Act in Haryana, many old trees get chopped to clear the decks for development projects.
“The penalty for tree felling is negligible in Haryana. Even forest officials often concede that they don’t have enough power to act against violators and penalise them. We need a strong Act. The heritage tag will help preserve old trees,” environment activist Jitender Bhadana said.
In neighbouring Delhi, for every tree felled, the violator has to deposit Rs 34,500 with the forest department and plant 10 saplings. Also, under the Delhi Preservation of Trees Act, 1994, anyone found flouting norms can face a jail term of up to seven years.
Development works over the years have taken a toll on Gurgaon’s green cover. The city’s protected forest area is 1,600 hectares, which is just 2% of its total area. According to forest department data, 1,657 fully grown trees were chopped for projects in 2013-14, another 1,604 in 2014-15 and 1,430 in 2015-16.
In 2017, the NHAI got permission to cut 5,000 trees to build flyovers and underpasses on NH-48. The following year, approval was given to chop 15,000 trees to widen Sohna Road. In 2019, permission to remove 1,300 trees at Atul Kataria Chowk was granted. The same year, the forest department gave the nod to GMDA to axe 450 trees for widening three roads in Udyog Vihar. A total of 15,884 trees were also felled from Subhash Chowk to Badshapur Chowk on a 22km stretch for expansion and elevation of the road. Similarly, in 2020, NHAI sought permission to cut 1,500 fully grown trees for the Regional Rapid Transit System.
Credit Source – https://timesofindia.indiatimes.com/city/gurgaon/forest-dept-to-tag-100-old-trees-with-heritage-status/articleshow/85023443.cms