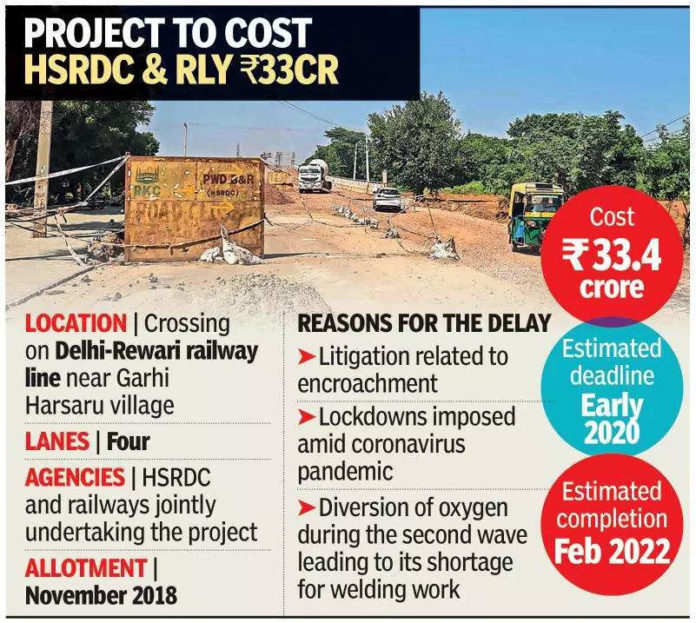 GURUGRAM: The construction of a railway overbridge (ROB) on the Delhi-Rewari line near Garhi Harsaru village is likely to be completed over the next three months and opened to the public by February next year, the Haryana State Roads and Bridges Development Corporation (HSRDC) and the Northern Railway said.
Work on the four-lane ROB had commenced in December 2018, but the authorities gave its early 2020 deadline a miss. The two waves of the coronavirus pandemic and a related shortage of labourers and oxygen, besides encroachment, had delayed the Rs 33.41-crore project, officials said.

A senior HSRDC official said the railways was responsible for constructing the part of the overbridge over the tracks while the remaining utilities and adjoining service roads were being managed by the corporation. “There has been some delay in the portion we are constructing because of encroachment in the areas where utilities, like drains and service roads, are to be constructed. The matter is in court and will be heard in November next,” the official said, adding that the pandemic, too, had slowed the progress.
“Ninety per cent of the work on the ROB under HSRDC has been completed. We expect to complete the remaining 10% by next month. The utility work, however, is still pending and has been complicated by the litigation processes. We hope to open the main road once that is ready and develop these utilities alongside,” the HSRDC official said.
The railways, meanwhile, also cited delay owing to the non-availability of oxygen during the second Covid-19 wave. According to sources, the portion of the Garhi Harsaru ROB being constructed by the railways is a bowstring bridge and requires oxygen for welding. “The part of the ROB being developed by the railways is nearing completion and we expect to wrap it up within November so that the ROB can be opened next month itself,” an official said. Sources, however, stated that work on the railways’ portion of the overbridge could go on till mid-January.
Credit Source – https://timesofindia.indiatimes.com/city/gurgaon/garhi-harsaru-rail-overbridge-may-be-ready-early-next-year/articleshow/87266331.cms