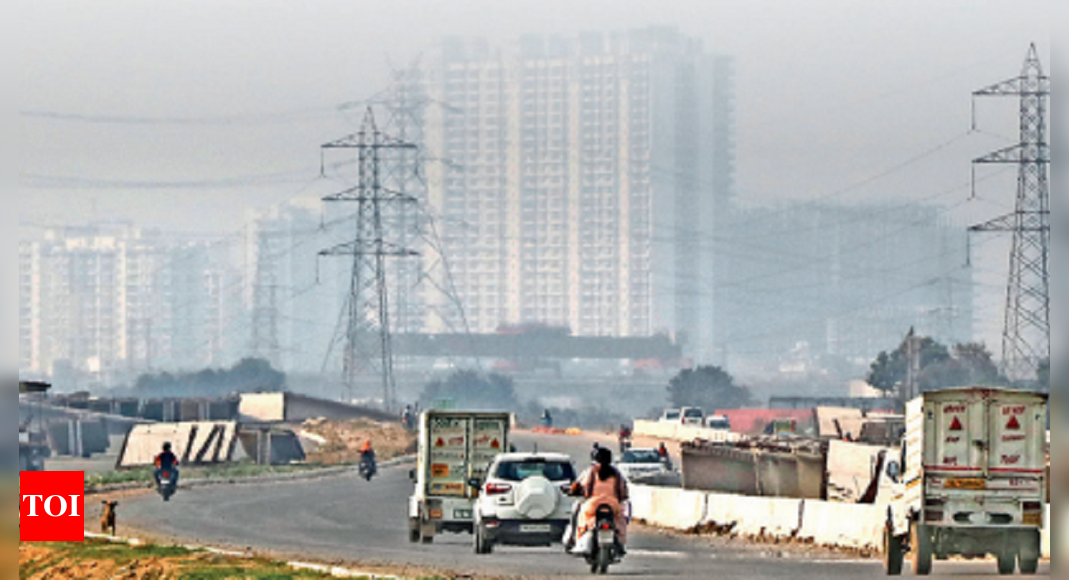 GURUGRAM: The air quality in the district turned ‘very poor’ on Wednesday after a gap of 16 days when the air quality was in the ‘poor’ category. The air quality index (AQI) dropped to 330 on Wednesday from 287 on Tuesday. Previously, the air quality had turned ‘very poor’ on October 17, when the recorded AQI was 332.
Three of the four air monitoring stations in the district, Vikas Sadan, Teri Gram, and Sector 51, recorded ‘very poor’ AQI while the data for Gwal Pahari was not available. Air quality experts said that atmospheric pollutants are not getting dispersed due to low wind speed. On Wednesday, the wind speed decreased to 6kms/hour from 8kms/hour on Tuesday. The situation may improve on November 6 due to strong surface wind.
The air monitoring stations recorded major leaps in the AQI on Wednesday from Tuesday. In Teri Gram, the AQI increased to 327 on Wednesday from 225 on Tuesday, the most significant leap across the district. In Sector 51, the AQI was 354 on Wednesday compared to 319 on Tuesday. Meanwhile, the AQI jumped to 309 from 299 in Vikas Sadan.
According to India Meteorological Department (IMD), t16 degrees Celsius minimum temperature and 27 degrees Celcius maximum temperature on Wednesday. As a result of the low temperature, pollutants remained close to the ground, resulting in a rise in AQI. The temperature is likely to fall further in the coming days, according to IMD.
Gurgaon will continue to have ‘very poor’ AQI on Thursday, according to HSPCB. “Our teams are monitoring the critical hotspots round-the-clock. Also, water is being thrown on dust-emitting road stretches. We are keeping a close watch to ensure that no illegal cracker gets sold,” said Kuldeep Singh, HSPCB regional officer, Gurgaon. However, the situation is not likely to change in the next two days because of meteorological conditions, he added.
Singh said that HSPCB would be taking all preventive steps to keep the AQI from slipping into the ‘severe’ category this winter. “Our teams are conducting raids and checks to ensure that GRAP (Graded Response Action Plan) is implemented in the city to mitigate air pollution,” he added.
Two other districts of Haryana recorded ‘very poor’ AQI on Wednesday. The AQI at Jhajjar was 313 and the AQI at Faridabad was 337. So far, the AQI has not slipped into the ‘severe’ category in any district.
Meanwhile, Delhi’s air continued to remain in the ‘very poor’ category for the second consecutive day on Wednesday with an overall Air Quality Index of 314, marked by shallow smog in the morning. The pollution level is forecast to surge on Diwali and the AQI is likely to slip into the higher end of the ‘very poor’ category or even touch the ‘severe’ category on Thursday and Friday. Strong surface winds may then bring about an improvement on November 6.
The impact of stubble burning in neighbouring states on Delhi’s air was calculated to be 8% of the PM2.5 level. Forecasting body System of Air Quality and Weather Forecasting and Research (SAFAR) counted 3,271 such fires on Wednesday.
Mahesh Palawat of Skymet Weather, a private weather forecasting agency, said, “Due to cyclonic circulation over north-west Rajasthan, the wind direction changed to south-easterly and easterly. The wind speed slowed during the transition phase and light wind caused accumulation of pollutants.”
The air is expected to degrade on Thursday. The sub-committee constituted for implementing the Graded Response Action Plan (GRAP) held a meeting on Wednesday and later said, “The AQI is likely to deteriorate marginally on November 4 and may be in the higher end of ‘very poor’ category on November 5 and 6 as the winds turn north-westerly. But even with higher emissions, model predictions do not indicate air quality hitting the ‘severe’ mark.”
SAFAR warned that the city air was likely to worsen if there were fireworks on Diwali, though all pyrotechnics have been prohibited. Its bulletin said the share of stubble burning was likely to rise from November 4 due to transport level winds reaching Delhi from north-west where farm fires were located. “In addition, very calm local wind conditions with little ventilation are expected over the next three days,” it said.
The forecasting body has estimated that if no firecrackers were burst in Delhi, the PM2.5 level would likely be in the upper end of ‘very poor’ during November 4-6. However, even if there is half the firework emission of 2019 this year, then the AQI would be prone to touch the ‘severe’ category in that period.
IMD has predicted surface winds at the speed of 20-3 kmph during the day on November 6 and 7. This will help disperse pollutants and help the air improve slightly, though SAFAR said it would still fluctuate between a high ‘very poor’ and ‘severe’ levels.
Tanushree Ganguly, programme lead, Council on Energy, Environment and Water, said, “Pre-emptive measures for controlling emissions from local sources must be implemented at the earliest. The government must also step up public messaging to urge citizens not to burst firecrackers on Diwali. This will help avoid the additional pollution load.”
Credit Source – https://timesofindia.indiatimes.com/city/gurgaon/air-quality-dips-to-very-poor-ahead-of-diwali/articleshow/87517851.cms