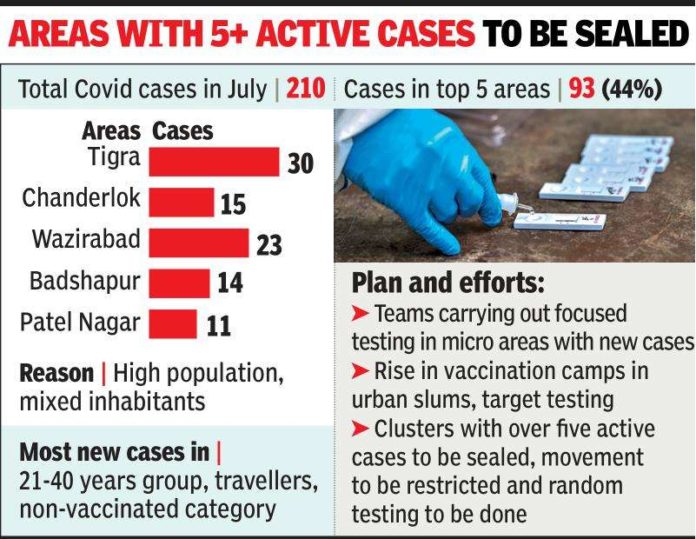 GURUGRAM: July has been lenient on Gurugram in terms of Covid numbers. At seven cases a day on an average, the month’s figures are the lowest since July last year. However, five areas have still been a cause for concern for the health department, accounting for 44% of the total cases last month.
These areas — Tigra, Wazirabad, Chanderlok, Badshapur and Patel Nagar —are densely populated, which means the infection can spread easily. Both slums and condominiums dot the area. Of the 210 cases that Gurugram reported in July, Tigra had 30 patients, Chanderlok 15, Wazirabad 23, Badshapur 14 and Patel Nagar 11. 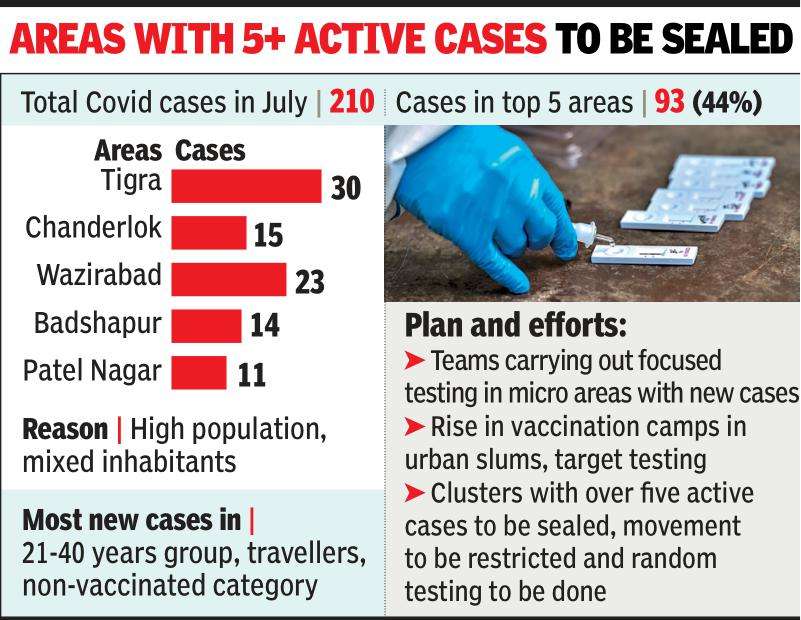 Officials in the health department said they were conducting focused testing in these areas. “Our teams have been carrying out focused testing in all micro areas of the city from where fresh cases are being reported. Most patients are in the age group of 21-40 years. They are either frequent travellers or those who are yet to get vaccinated. We are increasing the number of vaccine camps in urban slums and carrying out target testing,” said Virender Yadav, the chief medical officer.
According to him, a large number of people from Tigra, Wazirabad and Chandralok have in the recent past travelled to states where the caseload is still high. “The new cases are mostly people who have travel histories. We have been monitoring them closely and carrying out contact tracing of each infected person to curb the spread,” said Yadav.
At present, Gurugram does not have any micro containment zone. However, the district administration will seal off clusters that have more than five active cases. Random testing will be conducted in these areas.
In terms of Covid numbers, the city had witnessed a sharp spike in April and May, which continued through the first week of June as well. After June 8, daily cases dropped to double digits and since June 25, Gurugram has added just single digits every day. This was a huge relief when pitted against the numbers during the peak of the second wave, when the district reported 5,000 new cases on some days.
On Sunday, meanwhile, Gurugram reported nine fresh cases, taking the tally to 1,80,900. Of them, just 84 cases are active. The positivity rate stands as 0.1%. As many as eight persons recovered, bringing the total number of recoveries to 1,79,896. The recovery rate stands at 99.6%. A total of 73 patients are in home isolation while 11 are in hospitals.
Credit Source – https://timesofindia.indiatimes.com/city/gurgaon/gurgaon-saw-7-cases-a-day-in-july-but-nearly-half-came-from-5-hotspots/articleshow/84959298.cms