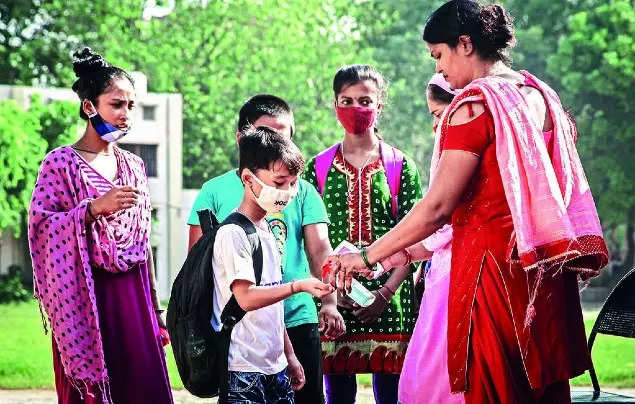 GURGAON: Pratik and Nancy walked in gingerly and took in the surroundings, wide-eyed. The voices around them were familiar but nothing else about the day was. The two 6-year-olds were experiencing a classroom that wasn’t on a mobile phone screen for the first time, 17 months after they were enrolled into school.
Class hadn’t begun with a mobile notification but the gong of a bell, parents weren’t around for a cuddle and an untimely toffee, and there was no option to switch off video and stretch out on the chair. This isn’t how they had known school.

On Monday, scores of kids got their first taste of school life after classes 1-3 were called back to campus across the state.
Junior classes had opened this March briefly, for barely a couple of weeks and with very low attendance, before the Covid wave struck. Since the pandemic shut down campuses in March 2020, this was the first full-fledged return to school.
Concern over big learning gaps due to prolonged online classes
Attendance was below 50% and it was mostly government schools that opened for physical classes. But for the little ones whose schooling began with online classes because of the pandemic that shut down campuses last March, it was an occasion – part confusing, part memorable, part fun.
Pratik and Nancy, friends with each other’s voices since they enrolled in Class II of Bajghera Government School, were meeting for the first time. Nancy said she was both worried and excited – she would be finally meeting her friends, but “I didn’t know if my friends would like me”.
Pratik was upset about being made to sit far away from his friends – on a bench all by himself and with strict instructions not to move around. “I wanted to sit near my friends, but the teachers did not allow me. But my teachers were nice to me,” said the 6-year-old, who had seen his cousins wear uniforms and go to school and had finally done that himself.
On the first day of resumption, government schools recorded 40% attendance on an average. Private schools, however, have decided to adopt a wait-and-watch policy. Many of them have sent Google Sheets to take feedback from parents on calling back junior students.
At Model Sanskriti School, 92 of 150 students attended class on Monday. The turnout at Bajghera Government School was also good. “It was more than what we expected. More students should join in a few days. The students were happy and excited to be back to school. So were the teachers,” said Manoj Lakhra, the principal of Bajghera Government School.
At the government school in Kadipur, 389 of 935 students of classes I to III turned up. Principal Sattan Pal admitted many parents were still apprehensive about sending their kids to school. “Some parents are still undecided about sending their children to school. However, we hope to see more students in the next 2-3 days,” he added.
There is all-round concern on big learning gaps because of a prolonged period of online classes. After the second wave passed and cases fell, even private schools started recalling students in the senior classes back to campus in phases.
A section of parents has, however, pointed out that children are yet to be vaccinated and returning to school exposes them to the pandemic. Some teachers admitted it was more difficult to make kids follow Covid protocols by themselves.
“Teachers are under extreme pressure to bring kids back to school. A number of parents are still sceptical. Those who are sending their children are asking us why we are not distributing mid-day meals. In keeping with government orders, we have been distributing dry ration at home. But parents want their kids to be fed at school,” said Dushyant Thakaran, the district head of Haryana Prathmik Siksha Sangh.
In some schools, the lack of support staff is worrying. “In these schools, teachers themselves have been sweeping floors and sanitising classrooms. This is in addition to teaching kids, distributing ration and other assignments,” Thakaran said.
Credit Source – https://timesofindia.indiatimes.com/city/gurgaon/gurugram-when-school-isnt-a-screen-for-first-time/articleshow/86382979.cms