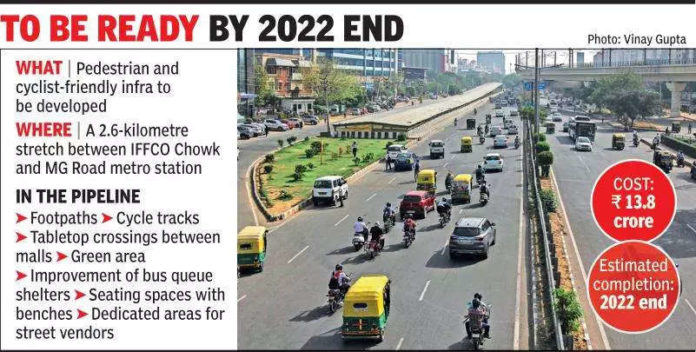 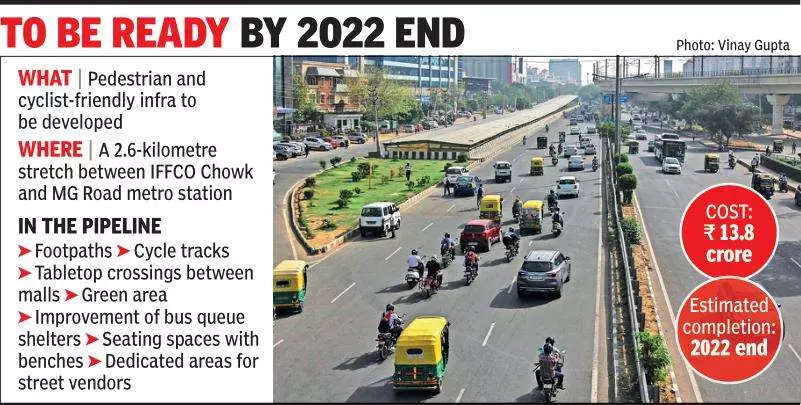 As a result, the area witnesses a heavy rush of pedestrians to cross the roads that leaves it risk-prone.
According to GMDA officials, table-top zebra crossings were being considered for the stretch to facilitate the movement of pedestrians and non-motorised vehicles by ensuring slower driving speeds. “The entire stretch will be revamped to ensure better space utilisation for cyclists and pedestrians, and to make it more organised,” an official said.
Earlier this week, GMDA’s Core Planning Cell (CPC) was informed that civil works under the project would be undertaken by the Authority, while The Energy and Resources Institute (TERI) would be roped in for greenery work, while beautification of the stretch would be done by corporates through CSR initiatives.
“The CPC has recommended the work. We will soon hold a meeting with all stakeholders, including the malls and other establishments, along the stretch to discuss the design,” the official said. The project, involving several civil works, was likely to take at least nine months to complete after the allotment of an agency. “We should be able to deliver the project by 2022 end,” the GMDA official said.
Namrata Sharma, who works at a private comp-any located on MG Road, said cycle tracks and demarcated crossings for pedestrians would make the stretch safer for pedestrians and drivers.
“As of now, people cross the roads wherever they want to, which not only compromises on their safety but also means that drivers using the stretch need to ensure that they move more cautiously than in most other places. It creates scope for accidents and mishaps, so this plan of the GMDA, if executed well, is quite promising,” Sharma added.
Credit Source – https://timesofindia.indiatimes.com/city/gurgaon/mg-road-to-get-rs-14-crore-pedestrian-cyclist-friendly-makeover-soon/articleshow/87320259.cms