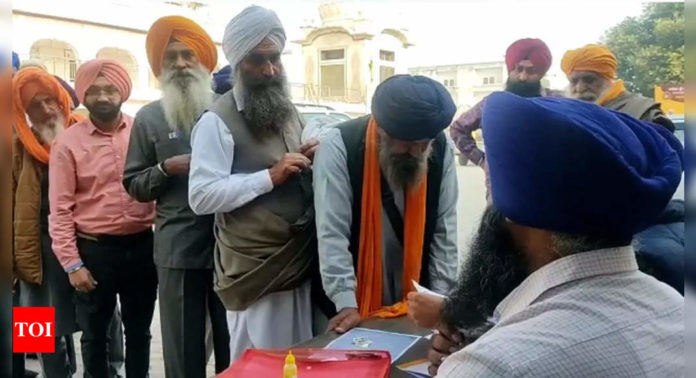 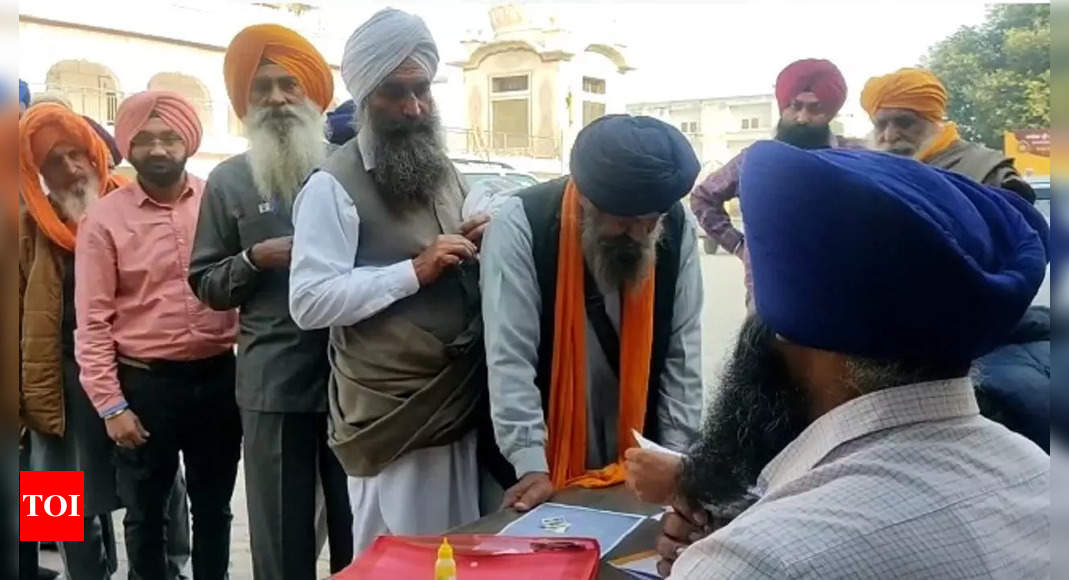 KURUKSHETRA: A total of 115 Sikh pilgrims of Haryana departed from Gurdwara Patshahi Chhevin, Kurukshetra to Amritsar on Tuesday, for joining the Shiromani Gurdwara Parbandhak Committee (SGPC) jatha (group) at Amritsar going to Gurdwara Janam Asthan, Sri Nankana Sahib, and other shrines at Pakistan to celebrate the Parkash Gurpurb (birth anniversary) of Guru Nanak Dev.
SGPC’s Haryana Sikh Mission in-charge of Mangpreet Singh informed that applications of nearly 140 pilgrims from Haryana were sent by the mission office to the Pakistan High Commission at Delhi, of which, 124 pilgrims were granted visas and 16 applications were rejected.
“Of the 124 Sikh pilgrims, 115 have departed from Kurukshetra on Tuesday to join the SGPC jatha scheduled to depart for Sri Nankana Sahib on Wednesday. Nine pilgrims who were granted visas have decided not to go due to their personal reasons”, said Mangpreet Singh.
A pilgrim leading jatha from Haryana, Ravinder Kaur said, “We have been longing to pay obeisance at the holy shrines including Nankana Sahib, Panja Sahib, Rori Sahib, Gurdwara Sacha Sauda Sahib, martyrdom place of Sri Guru Arjan Dev Ji in Lahore and Sri Kartarpur Sahib. There has been a long disconnect of the community due to various reasons and we feel lucky to have this opportunity. The Sikhs pray every day in their prayers for the glimpse of the shrines left behind on the other side (Pakistan).”
Notably, in March 2021, SGPC has announced to facilitate pilgrimage to Pakistan for Haryana Sikh pilgrims at its Haryana Sikh Mission in Kurukshetra and asked the pilgrims to start depositing their passports for visa procedure through SGPC quota. Earlier, the Haryana pilgrims used to visit Amritsar to deposit their passports for visas.
The Sikh jatha will be on a 10-day pilgrimage at Gurdwaras in Pakistan on the occasion of birth anniversary of Sri Guru Nanak Dev.
SGPC’s Dharam Parchar Committee (DPC) member Tejinderpal Singh Ladwa said, “All the jatha members will reach Amritsar and they will join the larger jatha and depart for Sri Nankana Sahib via Wagah border on Wednesday morning. The jatha will return home after pilgrimage of Gurdwara Sahibs in Pakistan on November 27.”
Credit Source – https://timesofindia.indiatimes.com/city/gurgaon/haryana-115-sikh-pilgrims-from-kurukshetra-depart-for-pilgrimage-to-nankana-sahib/articleshow/87740521.cms