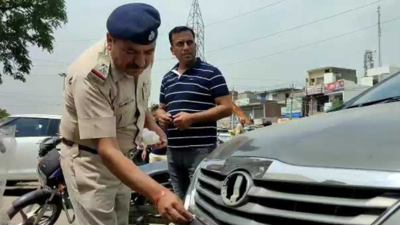 The cops collecting evidence from the spot.

YAMUNANAGAR: Two motorcycle-borne robbers shot dead the driver of a trader and robbed about Rs 50 lakh cash from him in front of a private bank near Kamani Chowk in Yamunanagar on Tuesday morning.
The driver went to the bank to deposit the cash but he was targeted by the assailants who managed to flee away on their two-wheeler.
The deceased has been identified as Shrawan Kumar (45) of Old Hamida Colony, Yamunanagar, police said.
City-based trader Ajay Bansal told the media that Shrawan worked as a driver with his company and had gone to deposit the Rs 50,9,000 cash in the bank.
The deceased was rushed to the civil hospital, where the doctors declared him dead.
SP Kamaldeep told the media that the police have obtained CCTV footage from near the crime spot and two people are seen committing the offence.