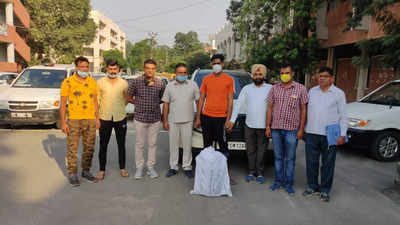 Police said that the accused (centre) has been identified as Ajit Singh alias Pinder alias Kala of Dhakala village.

KURUKSHETRA: The crime investigation agency (CIA)-II of the Kurukshetra police on Wednesday arrested a man from Shahabad after seizing 26.5kg worth Rs 45 lakh opium from his possession.
Superintendent of police (SP) Himanshu Garg said that the man has been identified as Ajit Singh alias Pinder alias Kala of Dhakala village.
Garg said that the accused was produced in the district court on Wednesday, which sent him to eight-day police remand.