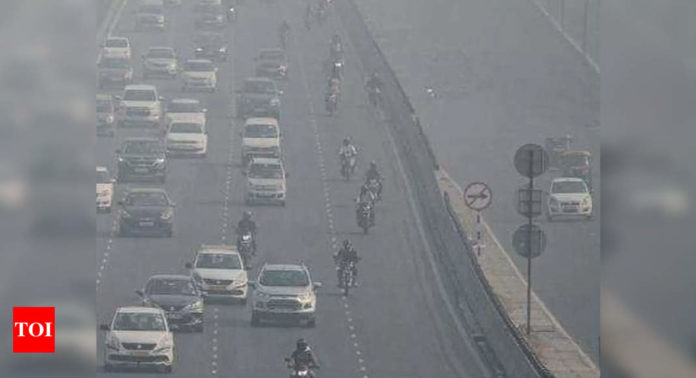 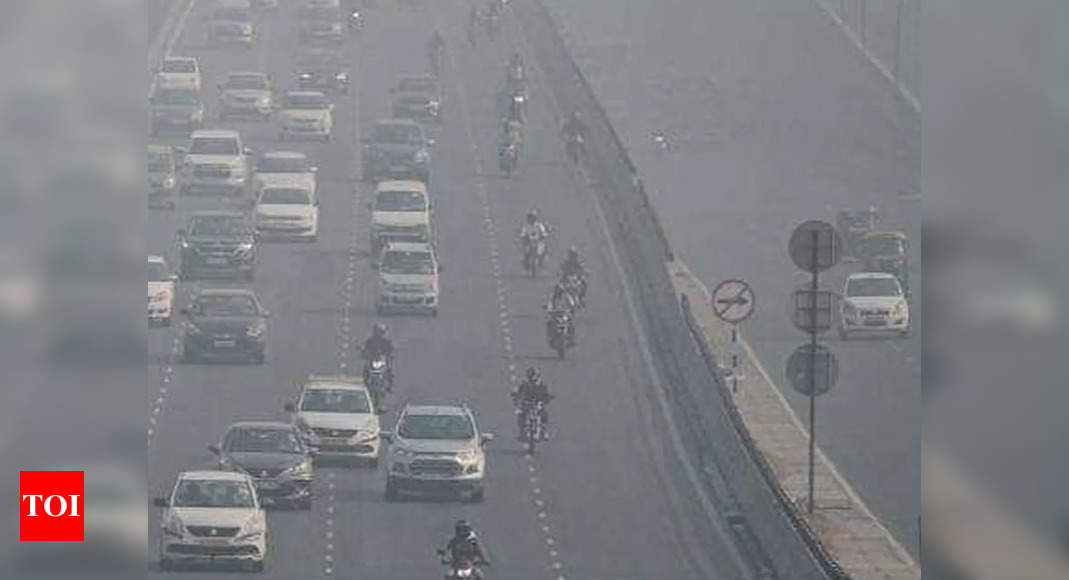 GURUGRAM: The city’s air quality turned ‘very poor’ for the first time this season on Saturday. Gurugram’s air quality index (AQI) was recorded at 308 on the day, a sharp spike from 195 (moderate) the day before.
Track the pollution level in your city
Low wind speed, a dip in temperature and bursting of firecrackers on the occasion of Dussehra has led to the deterioration in air quality, according to the Haryana State Pollution Control Board (HSPCB).
Officials said the air quality is expected to improve in the coming days, as it is likely to rain on Monday and Tuesday. At the city’s four air monitoring stations, the AQI hovered between ‘poor’ and ‘very poor’ levels on Saturday. While it stood at 298 at Teri Gram and 289 at Vikas Sadan — both ‘poor’ — the AQI was 342 at Sector 51 (very poor). The AQI was not monitored at Gwalpahari because of insufficient data.
Late on Friday evening, effigies were burned and firecrackers were burst across Gurugram to celebrate Dussehra. The air was filled with smoke as a result, and residents woke up to a hazy morning. Though the AQI was in the ‘poor’ category during the morning hours, it later dipped to ‘very poor’ in the afternoon.
According to Central Pollution Control Board (CPCB) guidelines, people can suffer from respiratory illness on prolonged exposure to ‘very poor’ AQI. An official said pollutants aren’t being dispersed because of low wind speed. “The city is witnessing a drop in temperature and low wind speed of 5km/hr. As a result, pollutants aren’t being dispersed in the atmosphere and are adding to the pollution. The suspended particles are present very close to the atmosphere, which has deteriorated the quality of air,” said Kuldeep Singh, HSPCB regional officer (Gurugram).
Asked how long the air will remain in the ‘very poor’ category, he said, “The region is expecting better wind speed and rain on Sunday and the pollutants are likely to get dispersed soon.”
The graded response action plan (GRAP) is yet to be implemented in the region. Violation of dust pollution norms at several construction sites across the city is also adding to Gurugram’s pollution.
Meanwhile, Delhi’s air quality entered the ‘poor’ category on Saturday, with the AQI touching 284, the highest so far this winter season. The overall AQI of the capital was 198 on Friday. After the wind speed dropped to almost nil, a ‘haze’ also appeared over the city during the afternoon. However, 18 monitoring stations recorded ‘very poor’ air quality on Saturday evening. System of Air Quality and Weather Forecasting And Research (SAFAR), the forecasting body under the ministry of earth sciences, said fire counts were gradually increasing and the share of stubble burning to PM2.5 was 14%.
CPCB’s central control room data showed that 24-hour average PM10 concentration for Delhi-NCR was 283.6 micrograms per cubic metre at 7 pm as against the standard 100 micrograms per cubic metre. The 24-hour average PM2.5 concentration was 143.2 micrograms per cubic metre at 7 pm. The standard for PM2.5 is 60 micrograms per cubic metre.
Experts said stubble burning and meteorological factors played a key role in deterioration of air quality. Despite the ban, firecrackers were burned in a few parts of the city on Friday on Dussehra.
SAFAR said, “PM2.5 has returned as the lead pollutant in Delhi’s air. Favourable meteorological conditions led to intrusion of stubble burning-related air mass. With 1,572 effective fire counts as per SAFAR harmonised methodology, which includes data of two ISRO satellites, the stubble burning contribution in Delhi’s air has suddenly increased to 14%.”
Credit Source – https://timesofindia.indiatimes.com/city/gurgaon/haze-envelops-gurgaon-air-turns-very-poor-for-the-first-time-this-season/articleshow/87072954.cms