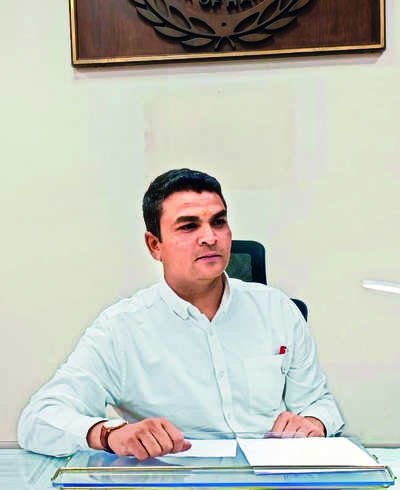 Gurgaon: Having worked in Gurgaon as assistant town planner for nearly six years, the new district town planner (enforcement), Amit Madholia, is well aware of all the key issues in the district. But after taking charge on Tuesday, he said that preventing development of illegal colonies and stopping unauthorised construction would be his top priorities.
“Drives against illegal colonies and unauthorised construction across the district will continue. We will also increase interaction with RWAs and encourage them to come forward and share information about various kinds of violations with the department to improve enforcement,” he told TOI. “I will also work on resolving issues between RWAs and developers in licensed colonies.”
This is, in fact, Madholia’s third stint in Gurgaon. He served as an assistant town planner from 2011 to 2015 and again from 2017 to 2018. A graduate of the School of Planning and Architecture, Madholia was previously handing the issues of licenced colonies in sectors 58 to 80 as DTP at headquarters.
He also worked as DTP in Yamunanagar, Karnal and Chandigarh districts.
His predecessor, RS Batth, who has been transferred as DTP Karnal, conducted more than 200 demolition and sealing drives against illegal colonies in Gurgaon in the past couple of years and cleared around 1,000 acres of land.
“Mushrooming and redevelopment of illegal colonies need to be stopped. Offenders often start developing illegal colonies after a demolition drive. Therefore, regular vigil has to be ensured by various agencies,” the new DTP said.
On the rising number of complaints against the property owners violating construction norms after being issued occupation certificates, he said that strict orders have been issued by top officials directing the district town planners to randomly check a few properties. “In case the property owners have not adhered to the plan and made violations later, strict action would be taken against them,” he said. Senior town planner Narendra Solanki, who has replaced Sanjeev Mann, is likely to take charge on Wednesday.