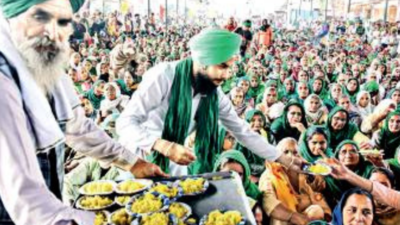 Sweets for the crowd at the kisan rally on Tikri border,Friday

ROHTAK/BATHINDA: On one year of the farmers stir, a big number of farmers converged on Delhi borders, basking in the joy of making themselves heard and grieving over the loss of their companions during the long march. As leader after leader summed up what was done and what was left to be done, they hammered home the point of farmers’ unity.
BKU (Ekta-Ugrahan) marked the day at Pakora Chowk with a massive rally, which began with paying of tributes to over 700 farmers who sacrificed their lives in the fight. Those gathered there saluted the temporary martyrs’ memorial and observed 2 minutes’ silence as revolutionary poet Sant Ram Udasi’s anthem of martyrs ‘‘chadhan waleoo haqaan di bhet utteh’’ was played from the stage.
Addressing the rally, Joginder Singh Ugrahan, president of BKU (Ekta Ugrahan), declared that getting the farm laws repealed was a historic victory made possible by the unity of farmers and farm labourers of the country as well as global solidarity.
‘ Farmers have shown a ray of hope to other sections of society’
Ugrahan reminded that demands like procurement of agriculture produce of all crops at remunerative minimum support price and universal PDS still remain unfulfilled. Pointing out that the government is keeping silent on these demands, he made it plain that any decision on the future course of the agitation (ghar wapsi) will be taken after formal repeal of laws by the parliament and acceptance of other demands.
Ugrahan underlined that unity achieved through this struggle needs to be strengthened further so that a crosscountry movement can be built to achieve a pro-peasant solution of the agrarian crisis. At the protest sites, children and elderly, men and women, carried flags of their farmer unions and raised slogans of victory and “Majdoor Kisan Ekta Zindabad” amid beating of drums. Others danced on the roofs of tractors, distributed laddoos and hugged each other.
At Singh border, farm leaders Darshan Lal and Balbir Singh Rajewal said that the protest had created history which will be remembered for long. The farmers have shown a ray of hope to other sections of society to stand up for their rights.
Harinder Kaur Bindu, leader of the women’s wing of BKU, hailed the role of women, who led from the front many a time and marched shoulder to shoulder with the men during the marathon protest against farm laws. She asserted that this role will be expanded in future struggles.
Sukhdev Singh Kokri, general secretary of (Ekta-Ugrahan), said their demands like procurement on MSP and PDS remain unaddressed as the government is committed to implementing policies of WTO. The farm laws were part of these policies so the real solution lies in India getting out WTO agreements. He added that the organisation will protest against WTO’s meeting in Geneva from November 29 to December 3 by burning effigies of WTO at protest sites in Delhi and Punjab.
Amolak Singh, state president of PLS Manch, said writers and artists of Punjab have played a supportive role in this agitation.
The farm leaders at Singhu and Tikri borders said this struggle has shown the value of unity in getting heard. They warned that if farmers become less vigilant about opportunist political parties, then upcoming elections may prove to be an assault on their unity.
Dr Navsharan Kour, human rights activist, Gohar Raza, Shabnam Hashmi, Nandini Sunder, Santu Dass from West Bengal were among those present at the rally.