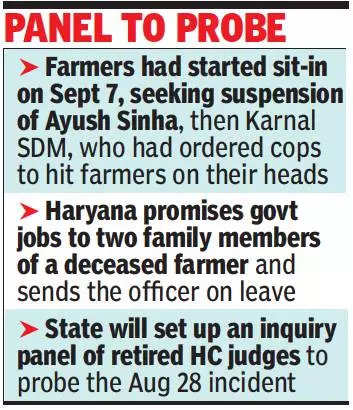 KARNAL: The stalemate between farmer groups sitting on an indefinite dharna at the Karnal mini-secretariat and the Haryana government ended on Saturday after the state ordered a judicial probe into last month’s clash between protesting farmers and police, promised jobs to two family members of a deceased farmer and sent the IAS officer at the centre of the row on leave.
The farmers had started the sit-in on September 7, seeking suspension of then Karnal SDM Ayush Sinha who is said to have ordered cops to hit protesters on their heads on August 28 — and a job for the kin of a farmer who allegedly died due to the lathicharge.

Karnal: 2 govt jobs for farmer’s kin
Ten protesters were hurt in the clash with police in Karnal on August 28 when they tried to march towards the site of a BJP meeting. Sinha was caught on tape allegedly telling policemen to “break the heads” of farmers if they cross the line.
Announcing the agreement at a press meet, Haryana additional chief secretary (ACS) Devender Singh said the state government will set up an inquiry committee of retired high court judges to probe the entire August 28 lathicharge episode. Singh, who was assigned by the Haryana government to resolve the issue, also stated that the controversial SDM, who had allegedly ordered to smash the head of the protesters, would proceed on leave for next one month.
Apart from this, two family members of deceased farmer Sushil Kajal, who the farmers claimed died to the police lathicharge, “will be given a government job on the sanctioned posts on DC rate”.
While there was no mention about financial assistance at the press conference, there are reports of farmer leaders claiming that assistance will be given.
Senior Haryana farmer leader Gurnam Singh Charuni, who was present during the joint briefing on the agreement, later announced the end of the farmers’ indefinite protest sit-in.
Charuni said, “After discussions, we have collectively decided to end our protest at the entrance of Karnal mini secretariat. The government has accepted most of our demands. Our protest against the three contentious farm laws and BJP-JJP leaders will continue.”
Credit Source – https://timesofindia.indiatimes.com/city/gurgaon/karnal-deadlock-ends-as-ias-officer-sent-on-leave/articleshow/86132921.cms