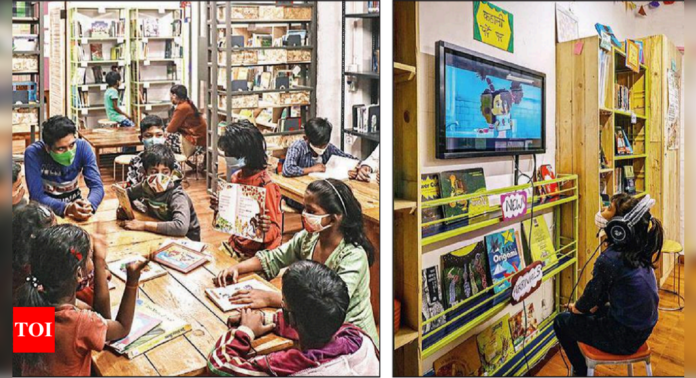 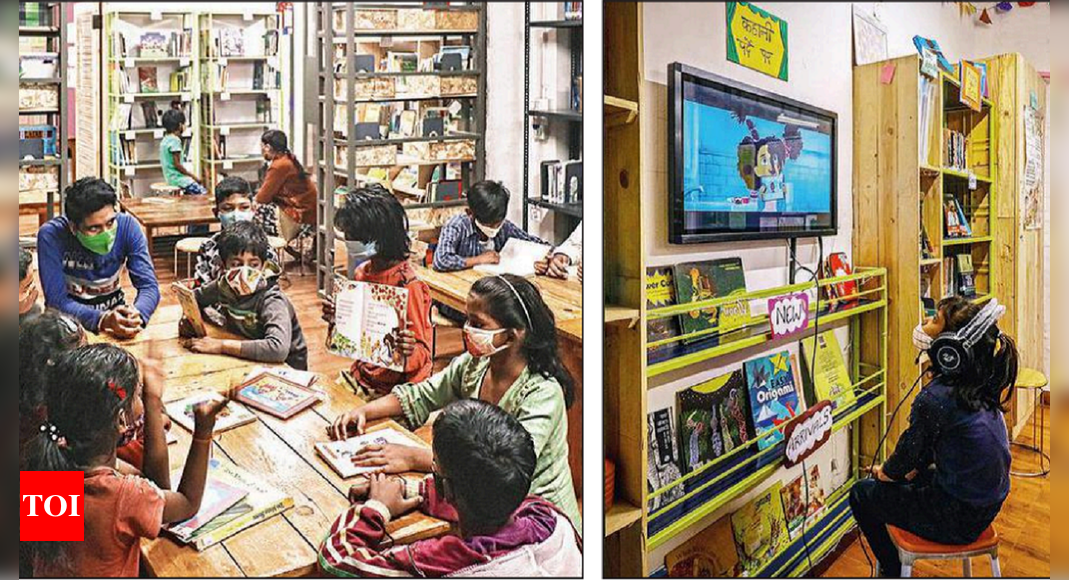 Shivek is a studious and enthusiastic intern at the South Extension branch of The Community Library Project (TCLP). He is part of the team that oversees the Free Library Festival, the annual TCLP fundraiser that was organised over two weekends in November. Being involved with the library, says Shivek, has given him responsibility and a sense of fulfillment.
Mariam, another member intern, is in charge of the art exhibition section of the festival, which features creations by artists from the TCLP’s three free libraries in Delhi (South Extension, Khirki) and Gurgaon (Sikanderpur). All artworks were up for sale and Mariam, a smiling and sparky teenager with roots in Afghanistan, was confident that buyers could be found — including one for her own piece of brushwork! She has dreams of becoming a doctor but might just settle for a course in computer science.
You’ll meet many Mariams and Shiveks at this free library, inquisitive young women and men engaging with the world around them, and trying to make sense of its contradictions. For, here is an emancipatory space where members — many of them from migrant families without the privilege and agency to be guaranteed a life of dignity — feel accepted, valued and safe, a space where they can think, debate and articulate what’s in their hearts and on their minds.
Run by volunteers of all ages, TCLP — which was registered as a trust in 2017 and has more than 5,500 members — is now back on its feet, having overcome, not without difficulty, the trials of the last 20 months, during which time it moved its activities online.
In fact, TCLP closed down its libraries days before the national lockdown was announced. “Suddenly, this important space in the centre of the community, a space where people came to talk, to share ideas and ask important questions, was gone,” recalls Prachi Grover, director and curriculum coordinator at the library. “There was a lot of adjustment and learning that was happening so quickly. But, we really have grown a lot in this time.”
Back in March 2020, as members returned to their homes, TCLP faced the tricky task of transitioning from the physical to the virtual. It also had to address the lack of availability of non-English resources for online studies.
“We needed to immediately ensure that there was access to good-quality education material and also stories our members could connect with, told in a way they can relate to.” Thus was born ‘Duniya Sabki’ (DS), TCLP’s digital library of audio and video content. “One of the challenges was to stay connected with our members and to keep our conversations going,” admits Shashank Samant, who has been volunteering at the Sikanderpur library since it opened its doors in 2017.
Alongside, TCLP felt it had a wider obligation towards its members, to be present for them in spirit if they could not be there in person. So, over the course of the pandemic-ravaged months, Duniya Sabki has also provided vital and verified information for the community, including news and updates related to rations and vaccines.

At TCLP, they’re especially proud of their ‘read aloud’ sessions, a key element in the culture of the library. “We don’t just do ‘read-alouds’ wherein we are reading from a book, we actually do ‘think-alouds’,” stresses Grover, an educator by background who joined the project in 2018 as a volunteer.
Above all, the folks at TCLP have committed to maintaining these libraries as safe venues owned and run by the community. “This was something that was always very, very important to our work, but now was the time when we started realising that so much more needs to be done — how Duniya Sabki could be an important community-owned platform, but also how it has to be space for members to share their voices,” Grover insists.
This concept segued into another, that of having an editorial board consisting of member leaders who can then become the voices of their community, to better represent themselves and their concerns. “We realised that we need to push DS towards being a member-owned space and that will happen only when members are trained on how to run those spaces. So, we need to scale down our role in it and increase the members’ role in it,” she acknowledges.
Still, one thing TCLP will not compromise on is the very idea it stands for. “We advocate for free libraries because that says everyone is welcome,” argues Grover.
“If we want libraries and books to be accessible for all, then they have to be free. And even if you can’t read, you’re welcome to come.” Because, for much of India’s history, much of the population has not been able to access the benefits and pleasures of study, and of reading and writing books.
Samant recognises that digital can’t be a substitute for brick-and-mortar. “An online library cannot replace the role a physical library can play for our members, who have historically been kept out of literature and the spaces of reading and writing,” he says.
Grover agrees. “Very recently, before a read-aloud, a librarian asked, ‘Why do you think libraries are important for everybody?’ And one of our very young library members replied, ‘Because here you can read and then you can write your own stories.’
“For them to start realising that they have the power to write stories is exciting and empowering.”

Samant too has been inspired by his experiences at TCLP. “I remember a group of young girls reading and discussing the book ‘Kasturba’ (by Tanaya Vyas), together in the courtyard. As they read ‘Kasturba,’ they wondered aloud, ‘Why are there so few stories about women freedom fighters? Were there really so few of them who participated in the movement or were their contributions not valuable enough?’” he recollects.
“The discussion was steered towards thinking who often writes history books, and the girls realised the exclusion that has happened over centuries in historic texts. We left the discussion with our young members saying, ‘Hum apni kahani khud likhenge’ (we will write our own story).”
With each passing day, Duniya Sabki is becoming what it had set out to be, which is, according to Samant, “a space owned by members and the community, where relevant information is made accessible to them, where their voices and stories can be amplified.”
“My understanding of what community ownership means has sharpened because member leaders have emerged to take charge of the library — they’re running the library, they believe in the idea of what it stands for.” And there can be no more powerful testimonial to what these repositories of knowledge should aspire to be.
Credit Source – https://timesofindia.indiatimes.com/city/gurgaon/of-by-and-for-the-community-building-a-library-for-everyone/articleshow/88098034.cms