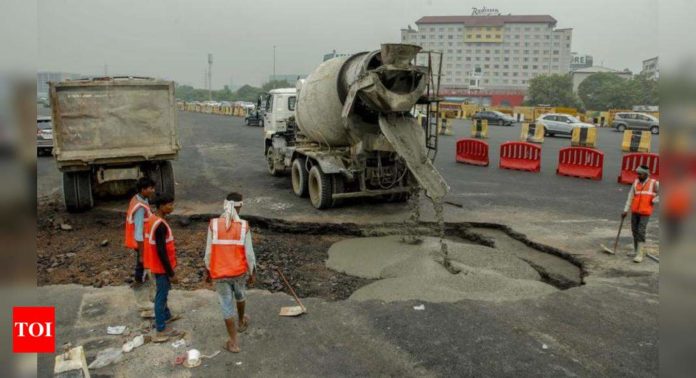 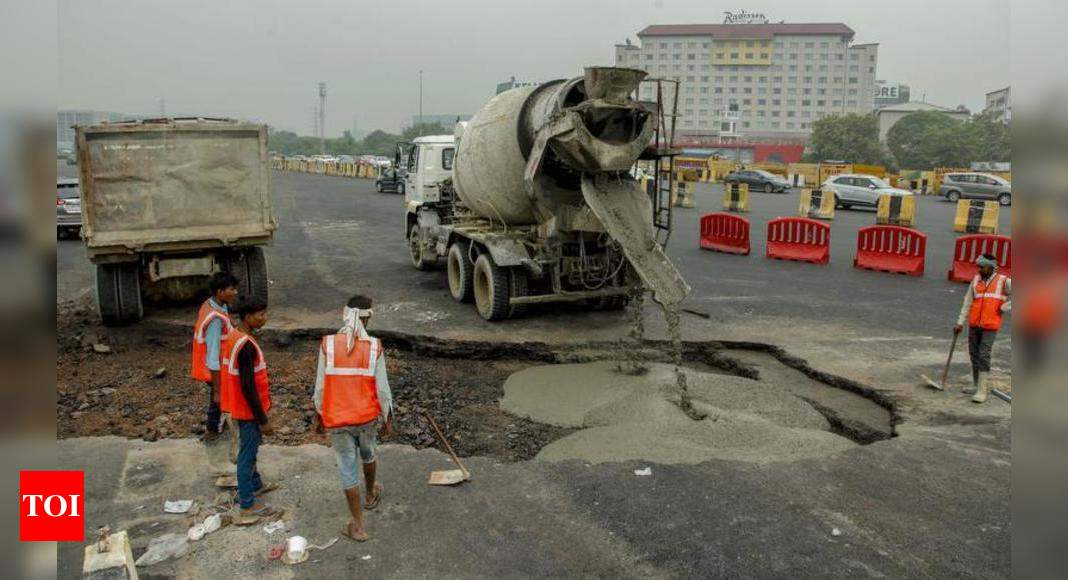 Gurgaon: A small part of the road near Ambience Mall caved in after heavy rainfall on Monday. The affected area is on the Gurgaon-Delhi expressway just ahead of the U-turn underpass. The stretch is being repaired and traffic has been diverted.
Traffic police officers said the incessant rainfall caused the earth beneath the road to sink, resulting in the cave-in.
After the incident came to light on Monday, a team from the National Highways Authority of India (NHAI) team filled the crater within hours, DCP (traffic) Ravinder Yadav said. Gurgaon witnessed heavy rainfall from early morning till afternoon on Monday, leaving many parts of the city inundated.
He added that traffic police officers were at the spot all day to manage traffic and keep vehicles away from the affected part of the road. “NHAI managed to get the required workforce and fill up the hole. Since it is wet cement, it will take some time to dry up before it can be opened up for traffic,” said Yadav.
While commuters didn’t face many problems due to the incident, it caused a delay of 10-15 minutes in the commute time.
NHAI, meanwhile, has maintained that the damage was the under-construction area of the Ambience Mall underpass and none of the already-constructed portions sustained damage. Explaining the reasons behind the cave-in, the highways authority noted that due to ongoing construction, the sides of the road where damage was reported were already dug up.
“Water is the worst enemy of an under-construction project. The portion where the settlement was slightly affected was still under construction and excavation was still on. Thus, the sides of the road were dug up and due to excessive rains, the water seeped in and moved the settlement of the road. Our response team quickly reached the spot and fixed the issue. The situation is under control now,” said a senior NHAI official.
Cave-ins on major roads are frequent in the city during the monsoon. Last year, roads had caved in at two different spots, including a patch on NH-8 near IFFCO Chowk, where a gaping hole had developed on the service lane under the flyover.
Officials from the Gurugram Metropolitan Development Authority had said a leakage had already weakened the road structure and waterlogging added to it. When vehicles, especially heavy ones, passed over it, the road suffered damages.
Credit Source – https://timesofindia.indiatimes.com/city/gurgaon/portion-of-expressway-caves-in-near-ambience-mall/articleshow/84601900.cms