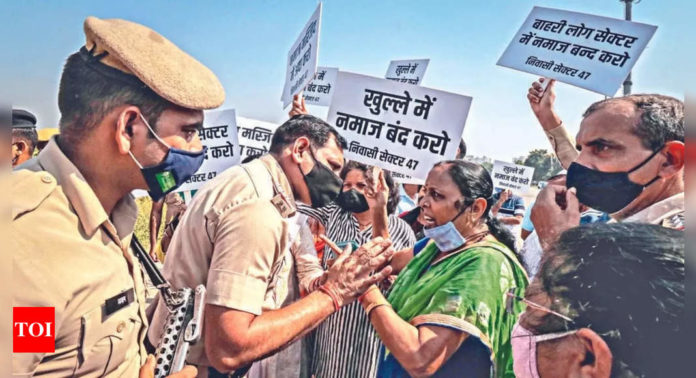 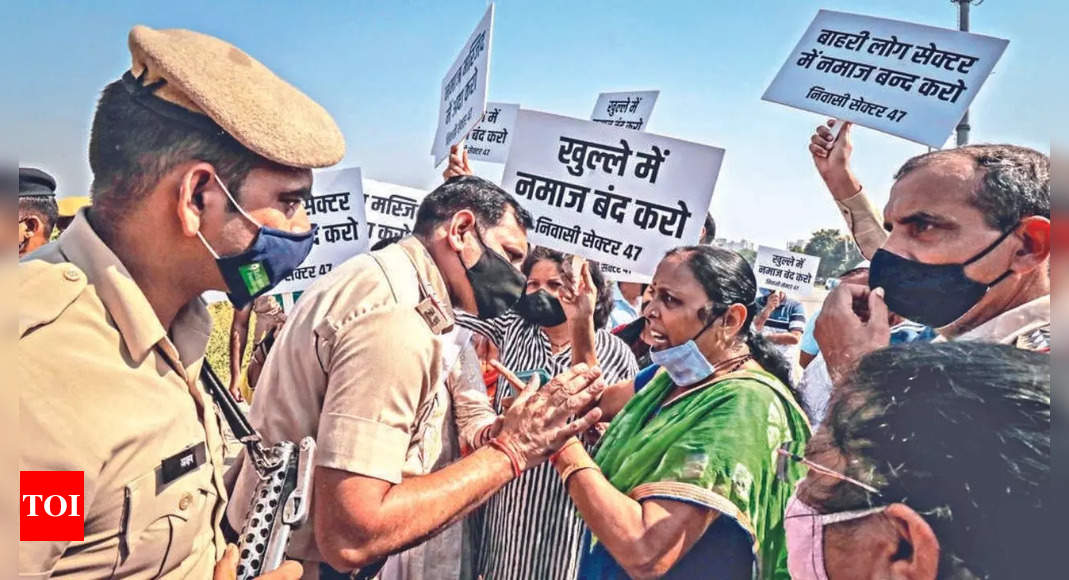 GURUGRAM: For the second straight week, a group of people, including locals, protested against Friday prayers in the open in Sector 47 with placards, slogans like ‘Namaz ki jagah khaali karo’ and ‘Bharat Mata ki jai’ and bhajan recitals.
Police were again forced to shift the congregation about 100 metres away. While the prayers passed off peacefully, they were carried out in a charged atmosphere and amid heavy police deployment.
In a near replay of last week’s incident, a large group of 100-odd people gathered at the ground opposite the State Vigilance Bureau office, where namaz is performed every week, around 1pm, when members of the Muslim community had assembled for prayers.
This time too, the protesters brought mikes and loudspeakers with them and sang bhajans. One of the placards read ‘stop namaz in open places’.
To stop the crowd from approaching the namaz site, police put up a barricade.
Some residents alleged that those praying at the namaz site are coming from far-flung sectors, like sectors 7 and 8, to “create trouble”.
“Police should check their ID cards. They are outsiders, they have options in their own area too, where they can go to pray. We have no problem with them offering namaz. We are ready to open our community centre to them for the purpose. But, they are here to encroach the land,” claimed Sector 45 RWA president Anil Yadav.
“We want the vacant plot to be turned into a market for the public’s convenience,” a woman who was among the protesters said.
Members of the Muslim community termed the protests an attempt by some “to gain political mileage”.
“Not all of the people who are protesting are residents. Political people are mixed up too. You cannot use religion as a tool to obstruct another community’s prayers,” said Altaf Ahmed, co-founder, Gurugram Nagrik Ekta Manch.
Alleging continued “harassment” of the community, Ahmed added that some people were trying to “instil fear amongst us”.
He also hinted that given the situation and the past few incidents, there could be an attempt to “instigate violence” at the site next week.
“The demand for IDs to be checked is unconstitutional and allegations that we are responsible for thefts and crime are uncalled for,” a person who was part of the Friday prayers said on the condition of anonymity.
Police said meetings, which include members from both sides, have been held with the SDM.
“Protesters have been opposing namaz in the open for a month now. Residents want the site turned into a market. Another meeting is scheduled next week and we hope to reach an agreement then,” said ACP Aman Yadav.
Credit Source – https://timesofindia.indiatimes.com/city/gurgaon/slogans-bhajans-again-as-group-opposes-namaz/articleshow/87050965.cms