Katrina gets custom-made shoes for her wedding 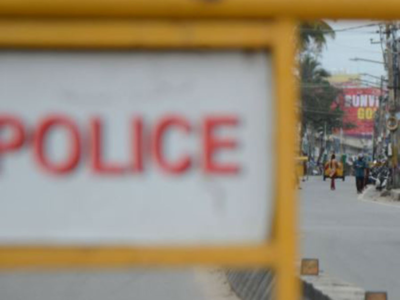 KURUKSHETRA: A traffic policeman was dragged for over half a kilometre along with a jeep as the motorist refused to stop at a check post and tried to hit and run past the constable prompting him to jump over the vehicle’s bonnet to save his life, police said on Tuesday.
The incident happened on Monday evening when constable Sanjiv Kumar was on duty at a police check post on a highway in Kurukshetra, deputy superintendent of police Subhash Chander told reporters on Tuesday.
Kumar had signalled a Bolero jeep to stop but its driver, who was accompanied by two others, ignored his signals and tried to run past the constable, who had to jump on to the jeep’s bonnet to save himself.
The jeep driver still did not stop the vehicle and continued to drive and even increased the speed in a bid to throw off Sanjiv, forcing him to cling on to the bonnet for his life, the DSP said.
The vehicle was eventually forced to stop by other policemen, including assistant sub-inspector Gulab Singh, who all chased the vehicle for over half a kilometre, he said.
The entire act of the driver could have very well killed the constable, the deputy SP said.
The act of the accused was also filmed by the policemen, he said.
As the jeep was finally forced to stop, Sanjiv Kumar fell on the ground and suffer some injuries, he added.
The jeep’s driver, identified as Nurdeep alias Lovepreet, and his two accomplices have been arrested, the deputy SP said.
The vehicle driver has been charged for an attempt to murder and other penal offences, he added.