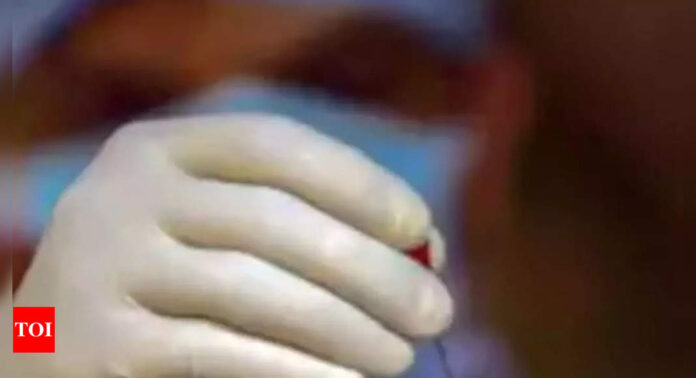 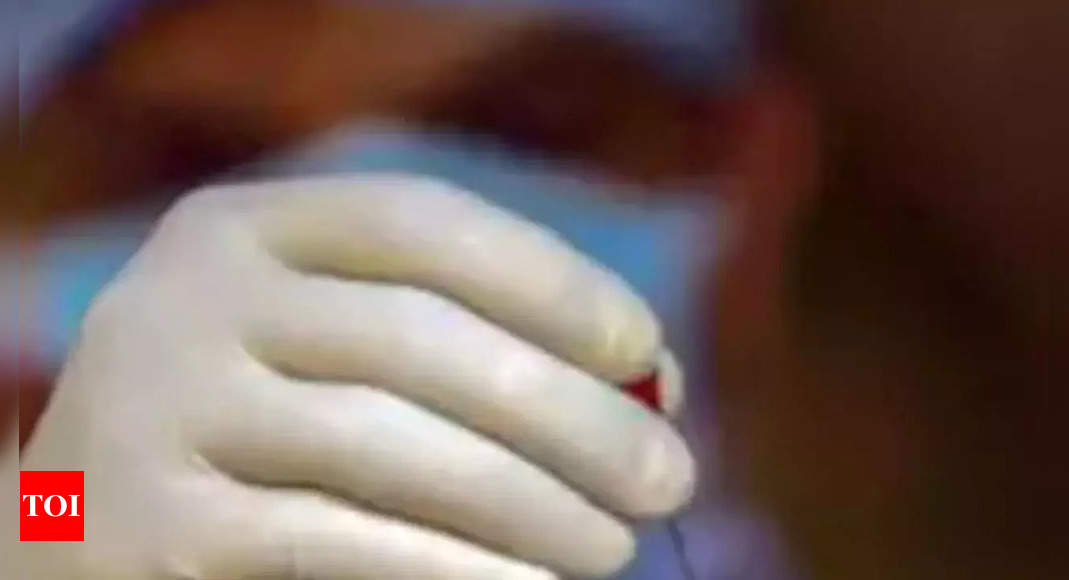 GURUGRAM: Two senior citizens with Covid died in the city on Monday. Both were fully vaccinated but had been admitted to hospitals in the city with comorbidities. So far, eight persons have died in the city after testing positive for Covid since January 10.
Gurugram, meanwhile, reported more than 3,000 cases for the fifth day on the trot. A total of 3,448 cases were reported on Monday, a marginal rise from Sunday’s 3,378. The daily positivity rate also witnessed a spike from 27.7% to 28.5% in the past 24 hours. However, only 154 patients are undergoing treatment in hospitals.
Of the two Covid patients who died on Monday, one was a 60-year-old man who was admitted to a private hospital with a chronic liver disease on January 10. He tested posi-tive three days later and was shifted to the ICU. He suffered a cardiac arrest on Monday.
The other patient, an 80-year-old man, was suffering from hypertension and was hospitalised on January 15. He was then put on ventilator after his oxygen levels started to drop significantly. He, too, suffered a cardiac arrest.
In the past one week, the city has reported eight deaths related to Covid — one on January 10, another on January 12, two more on January 14 and one each on January 15 and 16. So far, 935 people have died in the city after testing positive. Of them, 619 also had comorbidities.
Meanwhile, two areas with a number of highrises — Chadralok and Tigra — have emerged as hotspots in the city. Together, these two areas have accounted for nearly 40% of the city’s total cases in the past seven days. While Chadralok has reported 4,542 cases, Tigra has seen 3,306. Of the 21,365 cases the city has recorded in the past week, these areas have contributed 7,846 of them. While Tigra includes sectors 47, 49, 50, Sushant Lok 3 and Suncity, Chandralok covers the DLF phases, Ardee City and sectors 24, 25, 26, 42, 43 and 52.
Officials in the health department said they were conducting focused testing in these areas. “As a majority of the cases are contacts of Covid patients or those with travel history, we have been monitoring them closely and conducting focused testing of those showing symptoms in these hotspots,” said Virender Yadav, the chief medical official.
On Monday, the health department carried out inspections at primary health care centres in the city to assess the status of oxygen, medicines and other infrastructure.
Yadav, meanwhile, cautioned senior citizens against anyone posing as a government official and offering to book booster dose slots with an OTP.
“It’s a scam. Our officials are not calling anyone to book slots on their behalf. We also don’t need an OTP for the booking of slots. Although no such fraud has taken place in the city so far, people should always stay alert,” he added. Haryana, meanwhile, reported 9,204 new cases on Monday and a positivity rate of 22.8%.
Credit Source – https://timesofindia.indiatimes.com/city/gurgaon/2-more-covid-deaths-in-city-both-60-plus-and-fully-vaxxed/articleshow/88961171.cms