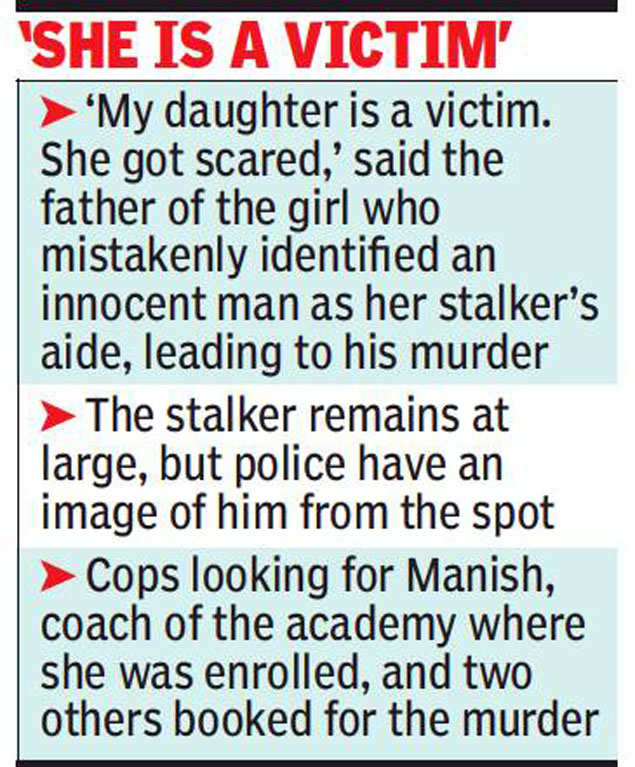 GURUGRAM: It had happened twice in a row – a man on a bike driving up uncomfortably close to her, making coarse taunts, following her as she nearly broke into a run.
That was Sunday afternoon. Same time on Monday, as she walked back from her tuition classes, she heard the same rev of the engine behind her, the same voice, the same catcalls. This time, he came with a couple of others. She felt fear rise quickly inside her.

“I was worried about my safety,” said the girl (17), a badminton player in the Haryana circuit, whose call for help triggered a chain of events that escalated beyond imagination, leading to the murder of a man who had nothing to with the episode. She had mistakenly identified him as an accomplice of the biker who had heckled her.
My daughter is a victim, she got scared, says dad
Anuj, a 26-year-old from UP’s Jaunpur, was in the area looking for work to earn his daily wage when a group from her academy bundled him into a car and thrashed him till he died.
“My daughter is a victim. She got scared. The biker was harassing her for two days,” her father told TOI on Wednesday as police continued the search for coach Manish and two others named in the FIR and booked for murder.
The biker remains at large, but police have a vital clue – an image shared by a local resident in the Sector 37-Basai area whose house the girl had taken refuge in on Monday afternoon when the biker allegedly molested her. “I took shelter in the house of an aunty who runs a boutique outside my academy,” the girl told this paper. “We will file a police complaint for harassment,” added her father, who drives a taxi in Delhi and had enrolled her for badminton training, confident she would become a future star. She has been living in a hostel in Gurugram to pursue her badminton training. The parents are based in Delhi.
ACP (crime) Preet Pal Sangwan said an FIR would be registered if the girl filed a complaint about the secual harassment she had faced, but the murder probe was independent of that and would follow its course. “Whosoever is responsible will be brought to justice,” said the ACP.
Sangwan said Anuj and two others who were with him, Sanjay (another labourer) and Chandan (a contractor), had nothing to do with the twin incidents of sexual harassment the girl faced. “Anuj had come to Gurugram only a few days back. He was in the area to find a job,” said Sangwan, adding Sanjay and Chandan were still in hospital and police were waiting to record their statements.
The cops have not been able to access CCTV footage of the attack on the trio inside the academy because the accused allegedly took the digital video recorder (DVR) with them. “After realising that a person had died, they fled from and took the DVR,” said a police officer, adding it’s a crucial piece of evidence. The sole arrest in the case so far – a man named Binda Prasad – was involved in tying the hands of Anuj and the two others, Sangwan said. “Our crime teams are trying to track down the main accused,” he added.
The academy has, meanwhile, closed and its seven courts where several state-level players regularly practice now lie vacant. The academy has around 70 students from different parts of the country. Some of the students stay on campus but have now moved out. The sudden closure has left parents of trainees worried. Along with Manish, the FIR names Manjit (a relative of the academy owner) and Punit (owner of a restaurant inside the academy). Binda’s wife Phoolmati claimed her husband was falsely implicated in the case.
Credit Source – https://timesofindia.indiatimes.com/city/gurgaon/was-stalked-by-biker-for-2-days-in-a-row-gurugram-girl/articleshow/85056691.cms