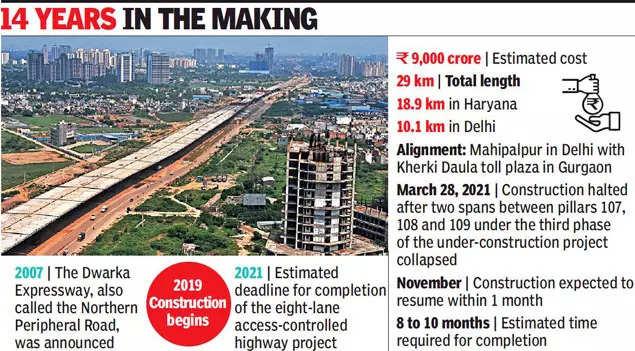 GURUGRAM: Seven months after construction on the main carriageway of the Dwarka Expressway was halted when a section of the under-construction elevated road collapsed, the National Highways Authority of India (NHAI) said it was likely to resume work on the project next month.
On Sunday, a senior NHAI official told TOI that the authority has already given a go-ahead to the contractor to start the pending work.

“We hope construction will start again within the next month. It will take around six to seven months to complete a substantial part of the work. Thereafter, the finishing work will require another two months. Overall, we expect that the entire work would be completed in around eight to 10 months,” the official said.
During a visit to Gurugram last month to inspect the work on the Delhi-Mumbai expressway, Union Minister Nitin Gadkari had said the Dwarka Expressway was expected to be ready in 2022.
The Rs 9,000-crore expressway, first conceptualised in 2007 as a northern ring road between Gurugram and Delhi, promises to not only decongest traffic on the existing Delhi-Gurugram expressway but also ensure better connectivity between Dwarka and parts of south Delhi. Of the 29-kilometre-long expressway, connecting Mahipalpur in Delhi with Kherki Daula in Gurugram, 18.9 km is located in Haryana and the rest in Delhi.
While construction in the Haryana section commenced in 2019, it remained overwrought with factors ranging from litigation to compensation for land acquisition.
Ban on construction to curb pollution and a subsequent lockdown amid the coronavirus pandemic further affected the work.
On March 28, work on the expressway was suspended after an “under erection span and adjoining span”, located between piers number 107 and 108, and piers number 108 and 109, collapsed leaving three labourers injured. The stretch is located near Daultabad Chowk.
An expert committee was subsequently constituted by the NHAI to ascertain the factors leading to the incident. “(The) authority has viewed the incident seriously and pending the outcome of the investigation by the committee, the concerned key personnel of the contractor M/s L&T and Supervision Consultant M/s AECOM have been suspended as per Standard Operating Procedure (SOP) of NHAI,” a statement issued by the NHAI had stated.
In September, after perusing the investigation report, the NHAI had issued a show-cause notice to the contractor and supervision consultant of the project. Officials stated that “overall” it had been found that there was a need to “improve workmanship” on the project with multiple aspects, “from material quality to costing to operation”, that led to the mishap.
Credit Source – https://timesofindia.indiatimes.com/city/gurgaon/work-on-dwarka-e-way-to-resume-in-november-after-7-month-break/articleshow/87254394.cms