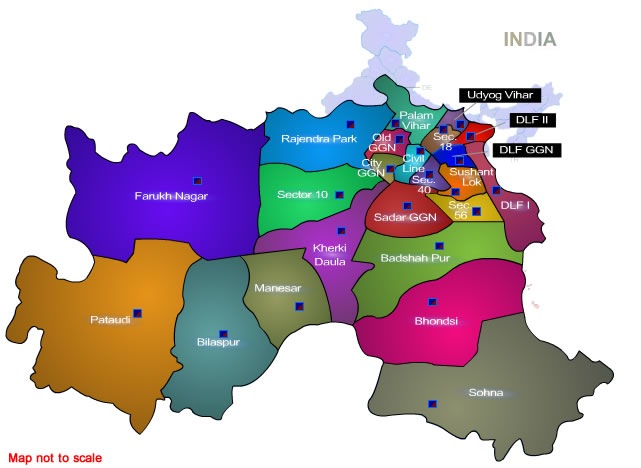 The city with the most beautiful skylines in the whole country, Gurgaon is an exciting, ever transforming city where people come to live their dreams. Once a playground of the Kauravas and Pandavas from Mahabharata, it is now home to most renowned multinational companies. Gurgaon’s magnificent transformation from ignored backwoods to space age super-city is truly fascinating.

Gurgaon is bursting with buildings, shopping malls, golf courses, and wallet draining showrooms of luxury brands, all boasting of eye popping modern architecture. Its energy is what makes it what it is! And perhaps that is what keeps people glued to it. One can feel the energy reverberating through its atmosphere and is immediately drawn into a relationship with this fast paced city.

The city is a blend of two different worlds. On one hand it has impeccable residential properties and on the other are dirty roads with garbage spilled all over. With corporate giants investing huge amounts to construct the best of offices using state-of-the-art technology to allure foreign clients and employees, no one seems to be interested in the condition of the infrastructural facilities of the city at large. The city has become synonymous with malfunctioning sewerage and drainage system, unreliable electricity and water supply, inadequate parking facility and poor transportation services.

It is difficult to believe that a city housing the biggest of the corporate giants does not have basic public services. The city has been growing without any planning. Instead of foreseeing contingencies, the State Government believes in temporary solutions to problems. The solution for electricity blackouts has been found in operating massive diesel generators ignoring the damage it would do to the environment. The well-illuminated city has not been considerate enough to think that the amount of power it is using operating these generators would be capable of providing power to numerous small towns. Drilling private bore wells has solved the problem of water shortage. Instead of improving the public transportation, the city believes in plying numerous private vehicles. Such is the inconsiderate thinking of the city. It solves its problems without thinking about the environment or country at large.

This is not the case in other cities of India where, with the help of able leaders and considerate businessmen, problems have been solved keeping in mind the benefit of the society at large.

It seems as though Gurgaon is divided into small segments and there is no connection amongst them. Each one thinks about his own segment. The need of the hour is to have an efficient governing body to bring the city under one umbrella with proper networking.

In the past decade or so, India has emerged as a global leader of sorts. According to sources it would surpass all its competitors and become the third largest economy by 2015. Gurgaon has contributed largely to the overall growth of the Indian economy and has become one of the fastest growing cities. It contributes to more than 50 percent of the total tax revenues of the state of Haryana. All said and done, one question still remains unanswered, is the city really prospering?